A summer in Sitges 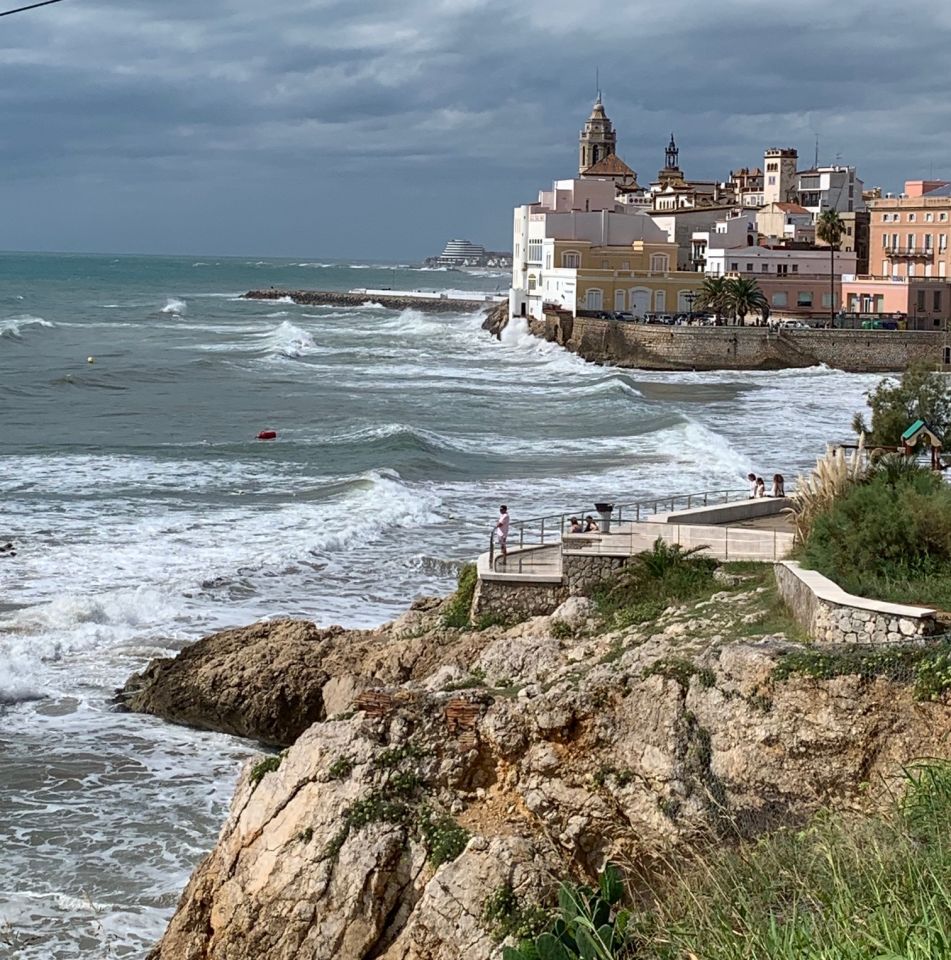 Another summer is drawing to a close. The nights get longer and the skies more troublesome. Most importantly in Sitges, where I live, we go back to village life, with the streets reverting to their usual aspect. There are still a few tourists around, but they seem to be of the quiet kind, those who come for a bit of peace and late sun, rather than for raucous fun.

For Sitges, the climax of the summer season comes towards the end of the summer, in early September, with its International Bear Week - which is actually more than a week long as it spans over ten days. If during the second half of August Sitges is full of families with kids, in a matter of days, as the month changes the town suddenly finds itself full of gays of the beary kind - and their many admirers of course. We are told that it is the biggest bear event in the world and whilst I have no way to ascertain this, it is without doubt a huge affair, with thousands of people coming from the four corners of the world each and every edition. Repeat business is the best business, one would say. Just a few days ago the city council of Sitges unanimously declared the event 'of special interest for the town', which hopefully will mean that the next editions will have more support and perhaps better funding.

This would be a marked change because while it would seem rather obvious for the city council of Sitges, where LGBT+ tourism represents such an important slice of the economy, to prioritize, protect and develop this sector, in reality they have always done very little, apart from some token gestures, like flying the rainbow flag for Pride and attending key events. It is known that that the previous administration (there is a new one since the June 2019 local elections) was more interested in developing 'quality family tourism', perhaps cynically inferring that LGBT+ tourism is not so 'quality' and in fact quite a bit messy. And yet, it's LGBT+ tourism, together with the conference and events business that keeps this town ticking outside the main season, because the family tourism only comes for two or three months a year and what are the shops, hotels and restaurants supposed to do to keep the tills ringing outside of those three hectic months?

As a result, if the declaration of Bear Week as a special event is the start of a new deal towards LGBT+ tourism that would be great news and we'll see if next year's edition benefits from this shift.

But there are other risks to Sitges' LGBT+ credentials. One is the level of crime: this past summer every social media outlet was full of reports of people (tourists and residents alike) who had suffered the effects of it. Stolen bags, phones and wallets are the relatively minor face of it, though it is thoroughly unpleasant to have no ID and no cards whilst abroad on holiday. Not to mention no phone to check Scruff or Grindr. However there were also reports of people being physically attacked in the street, mugged by group of thugs. One victim allegedly ended up in a coma. Although the majority of these attacks were reported to the police, there were no reports in the local media, nor the council felt the need to acknowledge the situation and make a public statement. You see, bad publicity is not good for a tourist town. And yet, we are in 2019 and people don't read newspapers and official communiques any longer: they get their news from Facebook and Twitter. And these social media outlets were for the whole summer ablaze with reports of crime and personal attacks. How much of this was due to a real surge in crime or rather to a public scare we will never know. However the image and reputation of the town got pretty battered. Of course Sitges is not Rio or Johannesburg, but that doesn't mean that it is OK to see this level of crime around.

It is all very nice to say that one should use common precautions, the same you would use in Barcelona or elsewhere. Of course it is a good idea to keep your wallet and phone safe. However while on holiday one would rather not have to worry about someone entering your room through an open window while asleep. Or having to stay 100% sober the whole time because getting a bit tipsy may mean someone may potentially take liberty with your phone or wallet. Or avoiding walking along side streets in case you get confronted by a group of muggers there.

Therefore there needs to be more policing and not just for gay events, because everyone is affected. The reality is that in Sitges you hardly ever see police presence, apart from those agents who every now and again get sent to the paseo marítimo to dissuade the illegal vendors - which often means just moving them to the further end of the promenade, a bit like lazy housewives who, instead of collecting the dust, sweep it under the rug hoping no one notices that.

In fact so invisible is the police presence that someone within the LGBT community even suggested for the next edition of the Bear Week event to charge a fee to pay for private security. And maybe, as undesirable as it is, that may be a way to at least provide a bit of extra personal security.

Another risk to Sitges' LGBT+ tourism (and not just to that segment to be honest) is its prices, which are much higher than other destinations like Torremolinos or Gran Canaria. To be fair, in Sitges accommodation isn't as plentiful as in these other destinations (also because in Sitges we don't have the high rises and the huge holiday complexes) and so its prices tend to be higher by default. But higher prices also create an expectation of higher standards, which may not always be the case. It is certain however that the higher prices also mean that a lot of gay people, especially younger ones, find Sitges beyond their means. And whilst the majority of hoteliers in Sitges fully support and understand the importance of LGBT+ tourism, a few weeks ago a well known hospitality businessperson who is also a contributor in the town's local paper penned in an article that he at times he feels like getting in a car and mowing down the crowds standing outside the main gay bars. It was supposed to be a joke (that is always the first defence for homophobia), but for someone who should actually be welcoming the thousands of gay tourists that decide to stay in his establishments, the revenue they generate doesn't seem an immediate problem by writing such homophobic drivel.... Again, as the news spread on social media there goes a small chunk of the gay friendly reputation of the town, something Sitges doesn't deserve as it is truly one of the most open minded town in the world.

So with another summer over, it feels really urgent that this small Catalan town with a precious historic bond with the LGBT+ community starts to regain lost ground, but this cannot just be left to the people who throughout the year work to make events like International Bear Week a success. Help should be coming also from the authorities who need to stop taking LGBT+ tourism for granted and instead start developing a proper tourism policy to ensure Sitges builds on its long association with LGBT+ people.

Venice, without the crowds
How to make the most of… Florence