Giorgio Petti
LGBT+ Blog
7106 Hits
What makes a Gay Pride really memorable? There are literally thousands of events in Europe alone, in itself a great sign of visibility and increased tolerance. All of them are different and worthy of attendance. All are also extremely important for the local LGBT communities. And yet, if one had to make a list what would be the most outstanding event - and why?​

If there was such a list, I'd put Amsterdam Pride at the top.​

Let's first state something that a lot of people don't know: Amsterdam Pride has only been around for twenty years. Unlike other events dating back to the 70s, to the gay liberation movements of those years, sometimes also inspired by the Stonewall Riots, the Amsterdam event is fundamentally a carnival, first organised at a time when LGBT rights, at least in this very progressive country, were well and truly established.

That does not mean that Amsterdam Pride is somehow devoid of a political statement; the message is there loud and clear, but the Dutch have a separate festival (Roze Zaterdag) that is more politically focused and that is traditionally held on the last Saturday of June, the closest weekend to the anniversary of the Stonewall Riots, in a different city every year.

Held on the first weekend of August, Amsterdam Pride is intended to be a celebration of LGBT culture as well as its importance and relevance to the city. And above all it's something that is designed to draw the whole of the city into the celebration mood. Unlike other events where the attending crowd is confined or separated from a city that continues to roar in the background in its daily mode, here everyone is invited to participate, mix with the crowd, interact and share the fun. It's all about dropping boundaries, about getting together and celebrate diversity, rather than anything else. And perhaps this is why this city is so incredibly accepting of diversity - of all kinds. 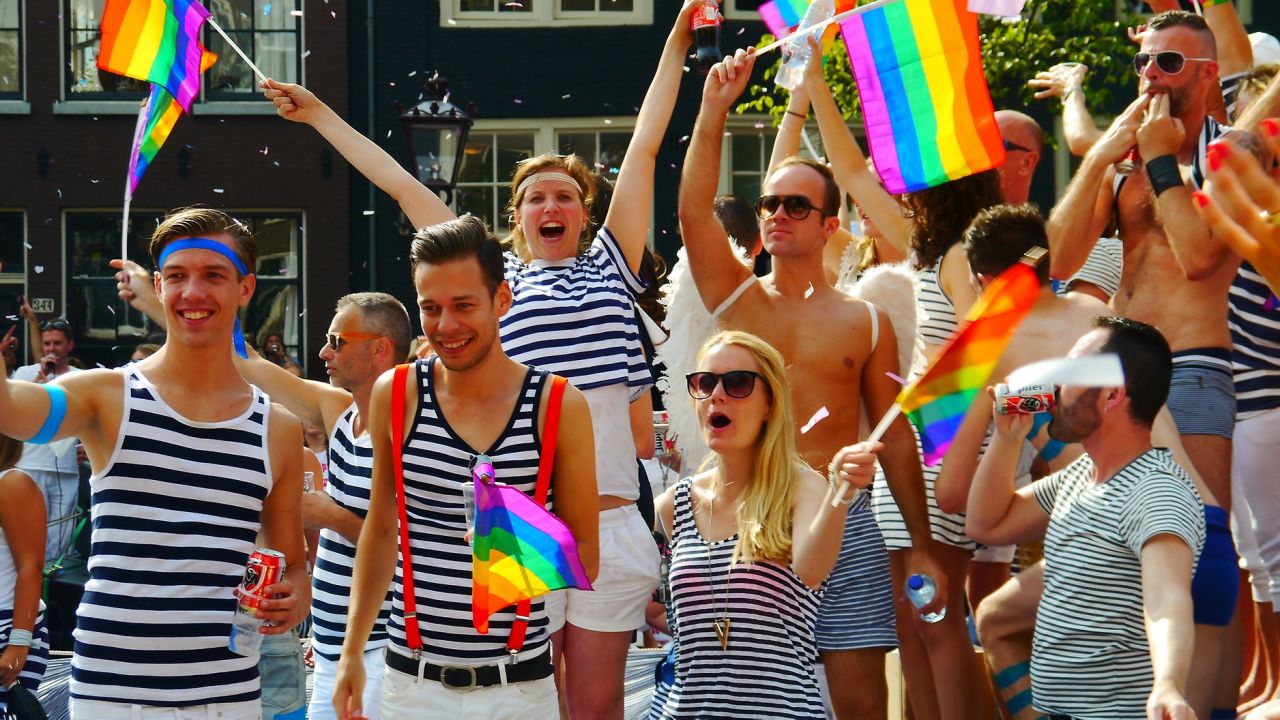 Amsterdam would not be Amsterdam without its canals; they remind us that the city is built on 90 islands, linked by over 1,000 bridges and that it actually lies 2 metres below the North Sea level. People here have a special connection with their canals, many own small boats and they love spending their spare time navigating the maze of canals or just relaxing by their side, cue the multitude of cafes and restaurants alongside them. So every celebration in Amsterdam must involve the canals, in fact one could not even imagine anything not happening without the canals being the key focus, such is their centrality to the whole city and its rich history. And Amsterdam Pride does not escape the logic. So while many prides around the world have 'floats' here they have real floats - i.e. proper boats, in fact more than 80 of them, parading from the Westerdok via Prinsengracht, the Amstel, Zwanenburgwal, Oudeschans and to the Oosterdok.

Along the route they encounter a flotilla of hundreds, in fact thousands of private vessels, moored to the side of the canals, all home to cheering crowds, plus hundreds of thousands of people lining the canals, the bridges or standing on balconies, rooftops and almost every available space with a view over the parade route.

Having attended this event many times, my tip here to enjoy the parade at its best is to get on a boat. If you can't be on an actual float (which I have done and it's awesome fun), make sure you can be on one of the many private boats lining the canals. How? Well, you can rent a boat, which is good if there's a group of you - there are a few private companies who can assist you here (but you need to be quick!). Otherwise I guess you need to befriend someone who has a boat. But the perspective you get from the water is well worth the effort. Watching from the canal sides is not quite the same experience, but if you decide to do that you must make sure that you turn up reasonably early (the parade starts at midday) if you want to get a decent viewing point, i.e. a bridge. 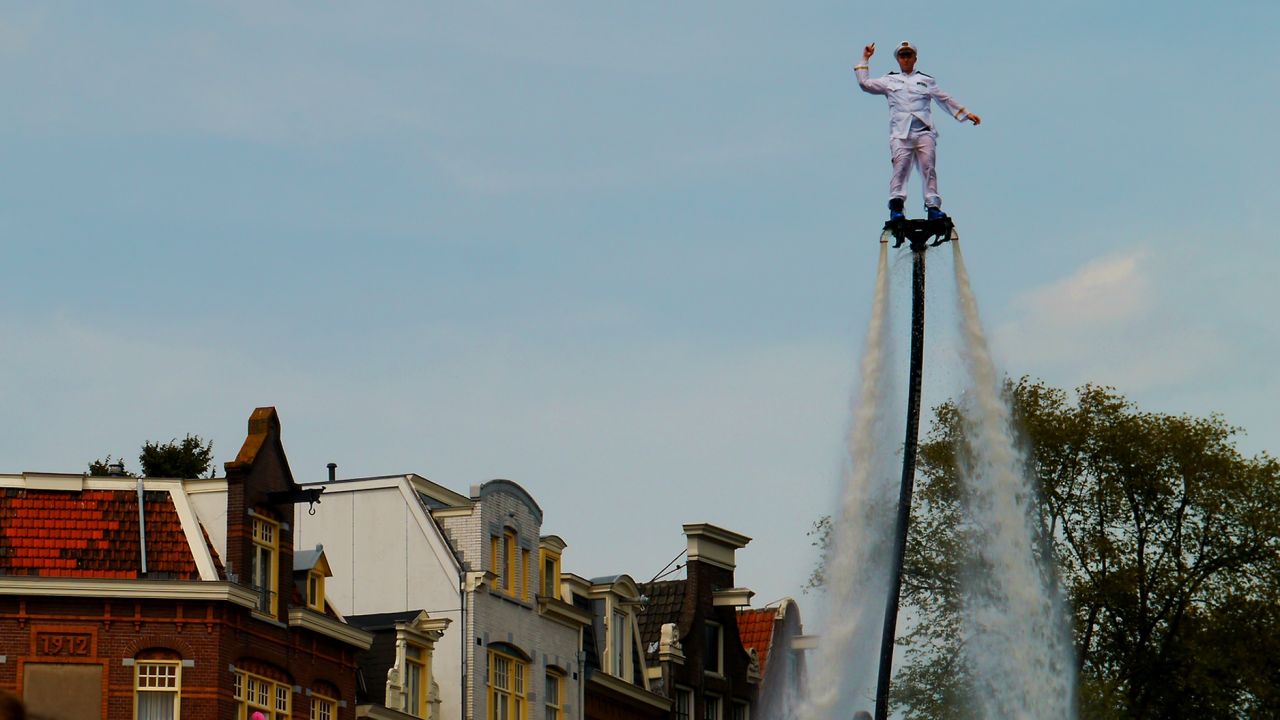 What is most incredible here is the crowd. It really feels like the whole city is here celebrating, not just the gays. You'll see young, old, families with their kids, straight couples, gay couples, old people. This is the real power of this event - it is not 'us' and 'them'. This is 'all of us' and it's something pretty unique among all the pride events where for whatever reason (and probably mostly security these days) the emphasis seems on separating, rather than uniting the crowds. Whether this will at some point change in the future, giving way to security fears in this Europe that is rattled by Islamic terrorism remains to be seen, but it would be a real shame if we were to lose this open and heartwarming celebration of city-wide diversity.

After all the floats have passed (and there are more than 80 usually!), the flotilla of private boats that have diligently remained on the side of the canals until then, is unleashed to continue the celebrations. Strangers chat from boat to boat, share wine, food, take pictures - it is amazing how everyone gets into the party mood. If the weather is good the boats keep crisscrossing the canals in the golden evening sunshine that seems never to end in Amsterdam's long summer days. A few years ago, in 2016 the city hosted Europride (which coincided with Amsterdam Gay Pride's 20th Anniversary) with an amazing party that warmly welcomed hundreds of thousands of people from all over the Netherlands and the world. But in all fairness this year we've experienced the same fun and cheers that we witnessed all the times we previously attended, when it was an ordinary Pride.

Of course the celebrations continue well into the night - and beyond. Usually the main after party on the Saturday night is FunHouse, hosted at the Gashouder & WesterUnie by the same crowd that brings you the mythic Rapido Party which also featured with an unmissable event at the unique Paradiso Club on the Sunday. For those who can't stop partying there is also a Rapido-After event back at the Westerunie. Rapido is a stalwart of the Amsterdam gay scene and anyone who's attended one of their regular parties will understand why.

But there is also a huge number of other parties being organised - the choice is immense, from Bear Necessity to various fetish parties. Or you can join the various street parties around town. Sadly, the 2020 edition of Pride Amsterdam was cancelled due to Covid-19, as many other events. We hope to be able to travel for next year's event, which will be on Saturday, August 7th, 2021.