Art, Underground - Six of the Best

​Urban metro systems are the lifeblood of most cities; tens of thousands of locals and visitors alike use them on a daily basis. Travelling on often crowded trains can be unpleasant, but in many cases the experience is made more appealing by the fact that in many European cities the metro systems also double as art galleries, showcasing designs and works of famous artists. Station platforms, ticket halls, passageways, accesses reflect art trends, visions, ambitious plans – or maybe just the desire to create spaces people could feel comfortable and at ease into, even while doing something quite ordinary like commuting from A to B.

So when you travel in these six cities below, perhaps from one museum to another, don't forget that there is an awful lot of amazing architecture and art below ground, not just above... 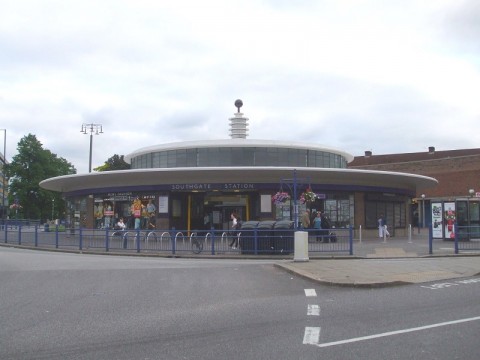 London has one of the most famous metro systems in the world and yet many people forget that it also a huge architectural treasure trove. The man behind such legacy is Charles Holden. Holden designed some of the most iconic Art-Deco stations on the network in the 1920s and 1930s, together with the HQ of London Transport, situated right above St James' Station and the imposing Senate House at London University in Bloomsbury. A key defining moment of Holden's work is when he travelled to Germany, Scandinavia and the Netherlands in the early 1930s. After this journey his projects displayed a stronger European/Scandic influence.

One of Holden's first project was a string of stations on today's Northern Line, between Clapham North and Morden. These South London stations, built in the mid-1920s have a typical Modernist look and are characterised by the white Portland stone cladding, huge ticket halls and the iconic Underground roundel in coloured glass, framed by two columns at the front. Another of Holden's creations was the beautiful and functional large circular ticket hall of Piccadilly Circus station. After his trip to Northern Europe, Holden designed the stations on the Northern and Western extensions of the Piccadilly line. One of my favourite is Southgate, which looks like a flying saucer. Another very interesting station is Gants Hill on the Central Line: this station is entirely below-ground and was designed in the 1930s but because of the war was not completed until 1947. Here Holden experimented with a grand vaulted ceiling, a style he saw in the Moscow metro. 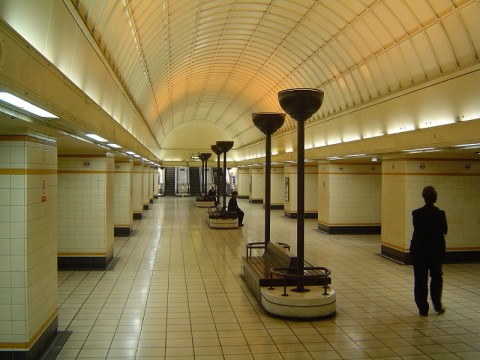 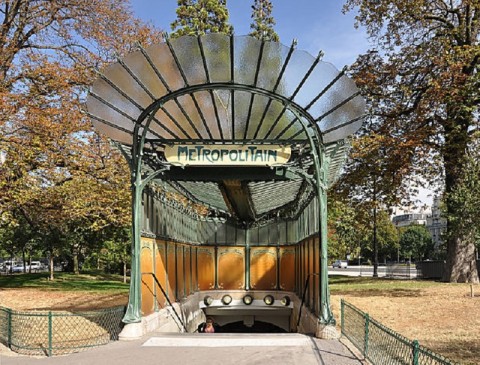 Paris Metro boasts probably one of the most recognisable designs, particularly the famous entrances to the subways, which were designed by architect Hector Guimard. In fact Monsieur Guimard designed two types of entrances, one with a glass roof and one without; both are iconic example of French Art-Nouveau, built in cast iron and displaying the classic botanic symbolism associated with this style. Sadly of the 141 entrances built between 1900 and 1912 only 86 remains as many were (criminally, I'd say) removed in the 1960s.

Although not all the Guimard's distinctive entrances were torn down, unfortunately just two roofed accesses remain, one at Porte Dauphine and another at Abbesses. The inside of all the stations built in the same period (i.e. before WWI) is quite austere and with the famous white glossy bevelled rectangular tiles. The reason for the stark choice was that electric lighting was very rudimental at the time and so this design allowed for a better refection of the light. When the new North-Line was built (now line 12 and part of line 13) the design was improved adding arches of coloured tiles – the colour to mark interchange from ordinary stations. The best preserved station in this very distinctive style is Solférino. 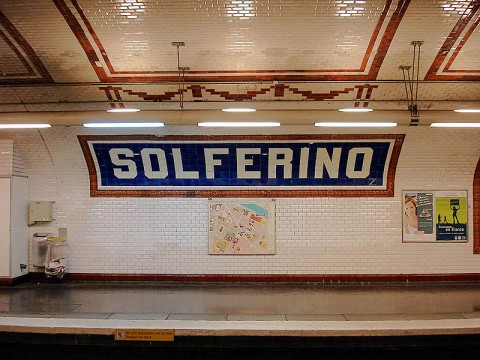 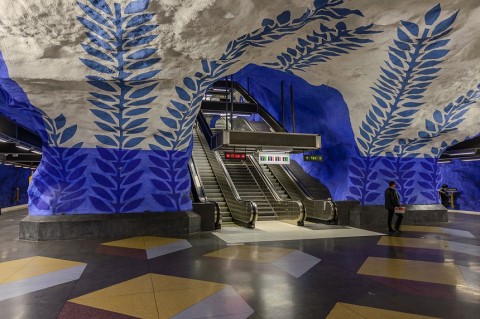 Stockholm metro (Tunnelbana) was developed in the 1950s, at a time of strong cultural and artistic expansion in Sweden. Being the city located on a number of islands, the tunnels had to be dug very deep, in fact right into the bedrock - and in most stations the bedrock itself has been left magnificently exposed, adding to the cavernous and almost pre-historic atmosphere. In the 1960s and 1970s the then Social-Democratic government decided that art had to be available to everyone, not just displayed in galleries and therefore commissioned a number of projects for the Tunnelbana, transforming it in what is now called 'the longest art museum in the world'. Get a day-pass and take time to explore the Tunnelbana network - which is also a sensible option in case of bad weather.

There are several stations worth mentioning, but I'd note in particular T-Centralen, where in the 1970s the artist Per Olof Ultvedt honoured the workers who built the station by painting their silhouettes (and his own) on the walls and ceilings. At Solna Centrum, Anders Åberg and Karl-Olav Bjork painted a fiery orange/red, hellish landscape above a Scandinavian pine forest, running for almost 1km along the walls, a statement again deforestation that was taking place in Sweden in the 1970s. Östermalmstorg features stark charcoal-coloured drawings showing key female figures from history: it is the work of feminist and peace advocate artist Siri Derkent in the early 1960s. Don't be surprised by the cold and haunting atmosphere of this place; the artist wanted to highlight that this station was designed to double as a shelter in case of nuclear attack. At Rådhuset, the artist Sigvard Olsson created a pink underground grotto, complete with various imaginary archeological findings, including a mock chimney stack base 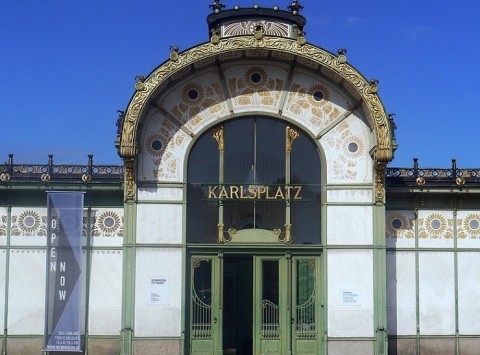 Vienna Stadtbahn was built at a time of Austro-Hungarian imperial opulence and splendour, between 1894 and 1901. Although several lines were originally planned, only part of the network was eventually built and in the 1980s the Stadtbahn was incorporated into the city's U-Bahn system - it now constitutes lines U4 and U6 of the system. The style of some of the stations built at the turn of the 20th century reflects the Jugendstil/Art-Nouveau architecture, which in Austria found its expression in the Vienna Secession manifesto, a movement of artists who objected to the prevailing conservatism of the Vienna cultural establishment with its traditional orientation toward Historicism.

he two above-ground buildings part of the (former) Karlsplatz Station are some of the finest examples of this style and were designed by Otto Wagner and Joseph Maria Olbrich, both members of the above mentioned Secession movement (the latter was in fact a founding member of it). These stations, with their distinctive steel framework and white marble slabs became the most modern, innovative, revolutionary (and thus controversial) buildings in Vienna at the time. Believe it or not, they were both scheduled for demolition in the 1980s, but thankfully the resulting public outcry managed to save them and today one of them houses a small museum and the other a cosy café. Another beautiful Art-Nouveau station is Kettenbrückengasse - also designed by Secessionist architect Otto Wagner. 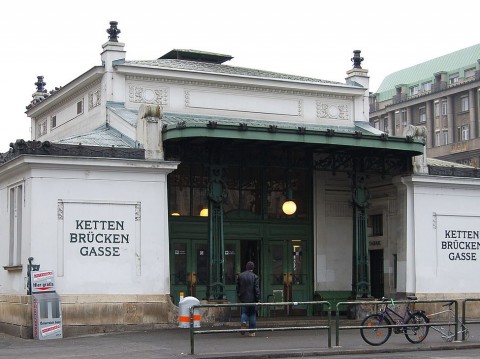 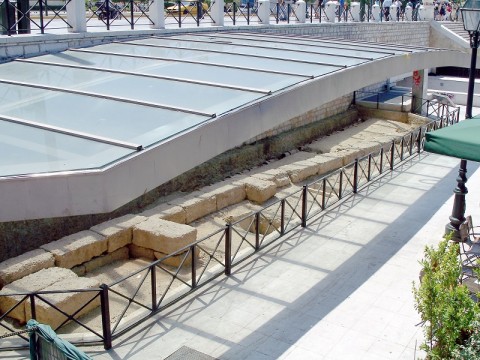 Compared to other European cities Athens metro system is fairly new as the bulk of the network was built from 1991 onward, though Line 1 is actually an old rail link between the city the Piraeus port that opened in 1869. However the tunneling of the other two lines under such an ancient city led to the discovery of over 50,000 artifacts, making it the biggest ever archaeological excavation ever made in the Greek capital. Many of these art treasures are now displayed in the stations, which means that metro travellers can almost journey back in time in time, rather than just from place to place.

Syntagma Metro Station is where many of the artifacts discovered during the tunneling have been put on display and it is not unrealistic to say that this is now a huge, if slightly unusual, museum of Greek and Roman local antiquities. Here metro passengers can view Roman baths, an ancient aqueduct, marble tombstones, and even a mosaic from the fifth century AD. Archaeologists have also included a very educational geological cross-section – each layer of earth is testimony to a different period reaching back to prehistoric times, starting with Byzantine times, moving down through Roman, ancient Greek, and finally prehistoric. Indeed, a travel back to ancient times. 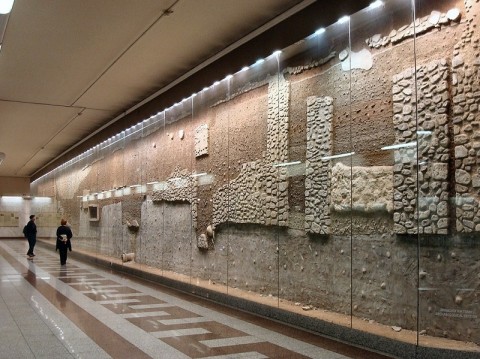 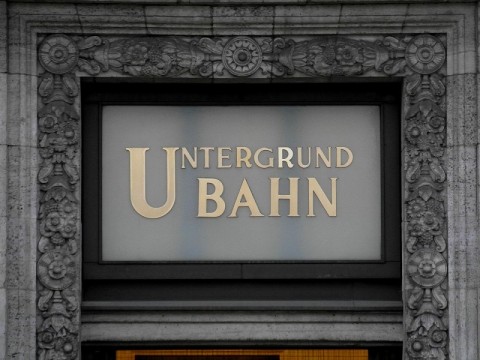 Why it's so special

As in other cities, Berlin started developing its metro (U-Bahn) system at the turn of the 20th century and also in the German capital we found one man behind most of the architectural design of the stations. Swedish architect Alfred Grenander worked on the U-Bahn stations design from 1902 until 1930, including the viaducts between Nollendorfplatz and Kreuzberg, which proved highly controversial at the time. Sadly he was almost forgotten after his death in 1931, but his designs are strikingly modern and still welcome thousands of Berliners and visitors alike today.

Grenander's style evolved over the course of his work on the U-Bahn. Wittenbergplatz station, which opened in 1913 and was partially rebuilt after being damaged in WWII is arguably his masterpiece, a stunning example of Art-Nouveau. Toward the late 1920s his style became more modern and functional and we can see this at Hermannplatz (1926) and Alexanderplatz (1930 - his last work): here we find coloured glazed tiles, riveted steel columns or grand pillars covered by tiles and exposed beams.

Apart from Grenander's style, Berlin's U-Bahn is a fantastic mixture of modern and old, which means that every station is different and a real pleasure to explore. 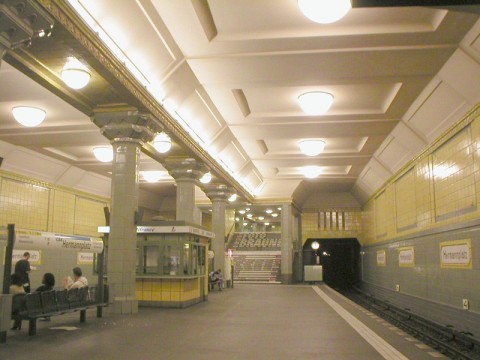