Barcelona's Eixample district is the city's main LGBT neighbourhood. Here locals and visitors alike find bars, clubs and shops catering for our community. Many gay & lesbian people have set residence in this area, which is famous for its long tree-lined streets and uniform blocks with chamfered corners, set in a strict grid pattern.

One of the best known LGBT landmarks of the Eixample is the Axel Hotel, which is housed in a lovely Modernista-style building and offering some outstanding accommodation and services, including the fabulous Sky Bar (open to hotel guests and visitors alike) which in the summer month is a must in Barcelona. Walk around the Eixample on any evening and you will be amazed by the number of gorgeous bars and restaurants to choose from.

But how did the Eixample come to be? Why is it so meticulously regular and uniform?

We need to go back over 150 years ago to find out. In the 1840s Barcelona was a bit of an exception in an otherwise pretty sleepy and backward Spain: the city was growing quite fast because of its port and also because many industries had settled in this corner of the country. Yet its population of almost 200,000 souls lived squeezed within the old city walls - that is basically the Barri Gotic of today - the Gothic Quarter. To anyone who has some familiarity with the city this may seem almost incredible: today this area is almost dwarfed by the city sprawl. But this was the Barcelona of those years: an overcrowded, insalubrious city where life expectancy was well below 30 years of age for most people. In those cramped conditions diseases and epidemics were frequent and devastating.

The situation became so untenable that the authorities decided to do something about it. So in 1844 the first act was to tear down the old walls that girdled the city. We may think of that as a big loss today, but the effect was to open up the city, making it breathe again.

The task of designing the future for the city was assigned to a little known Catalan engineer, Ildefons Cerdà. What Cerdà did was pretty amazing: he effectively invented what we call 'urbanisation' - in fact he himself used the term for the first time in 1867. He studied meticulously the population of the city, its habits, its professions, its needs in terms of schools, hospitals and services.

And so the Eixample (which means 'Expansion') was created, just north of the old city. Cerdà's design, the regularity and symmetry of his plan is a testimony of his desire for equality and fairness. As in many other instances in more recent times, Cerdà wasn't just designing a city, he was actually implementing a social and political vision - the creation of a metropolis created for the benefit of its inhabitants and where the inevitable gap between rich and poor is mitigated by the design of the city itself. But Cerdà was also anticipating the future - the trademark chamfered corners of the Eixample were devised to improve traffic and visibility, because he believed that soon (steam-operated) machines would have replaced horses and carts.

Not everyone at the time was enthusiastic with Cerdà's plans - many other architects contested the fact that the new Barcelona would have looked too similar to any north-American city. And yet many others flocked to the new Eixample - with more space available to build and a much more salubrious environment to look forward to. Towards the late 1800s and the early 1900s with the explosion of Modernism, rich people flocked here to build their beautiful mansions, in fact competing in creating the most ornate and gorgeous residences, many of them still standing today and being such a trademark of Barcelona. But this did not change the basic idea of Ildefons Cerdà: that rich and poor would live side by side, using the same services, the same roads and the same facilities.

Today Barcelona is rightly celebrated as a true urban success, validated by the many improvements that the city received ahead of the 1992 Olympics - some of them still praised to this day as examples of urbanism that goes beyond the short-term practicalities of organising a sporting event. But some of the credit for the success of the Catalan capital must be given to Cerdà and his visionary plan. He turned Barcelona from a cramped and insalubrious city to a stunning, beautiful and modern metropolis, as we see it today. 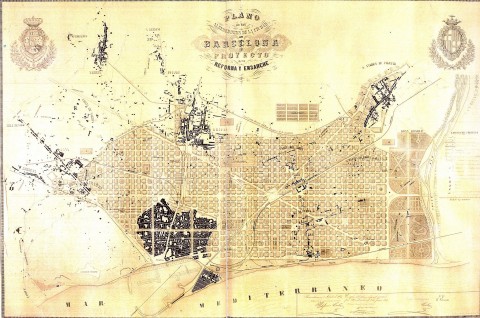