A beach day in Barcelona

Most large mediterranean cities are not particularly famous for their beaches. Often they have large and busy harbours that partly close the natural flow of these cities towards the sea. With the harbours often come the factories, the passengers and goods wharves, the storage facilities, so in the end in many cases the sea remains perhaps visible, but locked away almost unreachable (and unusable) behind this artificial curtain.

Barcelona did not escape this destiny - and yet it managed to reverse it. Up to the late1960s, the locals did not have a single beach worth of this name within the city limits. The whole shoreline along the city was occupied by the harbour and then, to the north, by an interminable row of smokey factories, all the way to the city's border with neighbouring Badalona, where the river Besós discharged its rather dirty waters in the sea. To compact the problem, a large stretch of the city coastline was occupied by several shanti towns, like the infamous Somorrostro, where thousands of people lived in misery and precarious dwellings.

"Barcelona didn't have a proper, usable beach until the late 1980s"

Although the Sorromostro was finally demolished in 1966, the final redevelopment of the coastal area of the city did not occur until the mid-1980s, when the city prepared itself for the 1992's Olympics. By then, the long stretch of smokey factories had been relocated elsewhere (leaving room for the trendy loft-conversions and warehouse media studios of Poblenou), the cumbersome coastal rail line that separated the city from the sea was closed and the river Besós was cleaned up, with its shores turned into a nature reserve. Sand was brought in to enhance and widen the newly designed coastline, a new attractive palm-lined promenade and even a new leisure port was created. Finally Barcelona had a proper beach - for the first time.

"Visitors and locals can now enjoy many gay-friendly beaches, both in town and further afield"

Of course many visitors don't actually come to Barcelona for its beaches, but rather for its culture, its monuments and its scene. And yet one of the main features of this stunning city is that it has a number of nice beaches - in fact a few of them - to cool down and enjoy during the summer months.

I have listed below a few gay-friendly beach options for Barcelona visitors and locals. Some are proper city beaches, ideal for those who just want to spend a few hours in the sun. Others are away from the city and further along the coast, so they may be more recommended for a day-trip or even a summer weekend escapade. 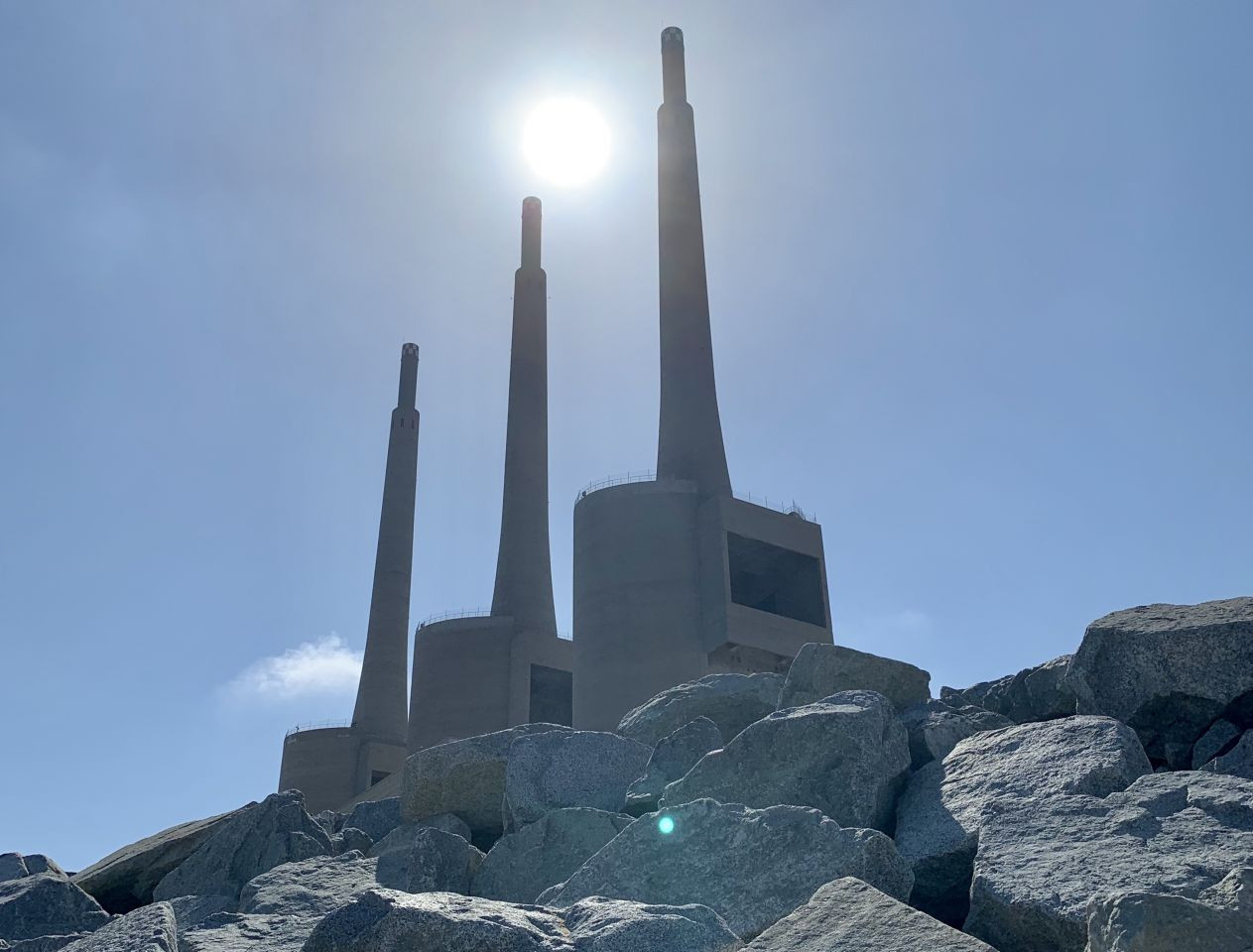 Of all the city beaches, La Barceloneta is probably the most easily reachable, just a stroll from the Gotico and El Born. Because of that it can also be quite busy, especially at the weekend. If you don't mind the crowds and the constant flow of beach sellers (mostly illegal), then this is a great choice. I personally love coming here in the late afternoon to chill and have a drink and a couple of tapas at one of the bars or chiringuitos along the promenade while people watching.

About three kilometres north of the Barceloneta (30 minutes walk along the seafront promenade or about 10 from Poblenou's L5 metro station) the Playa de la Mar Bella is probably the most known gay beach in town, complete with a funky chiringuito playing great music and often throwing a sunset party or two. Part of the beach is clothing-optional, for those who like sunbathing in the nude. Behind the main nudist section is a small mound which I believe was built to prevent a full view of the naked beach goers from the promenade. However (gay) boys being (gay) boys, soon the mound and its wild shrubs became a haven for other 'leisure activities'.

Just past the city limits, across the river Besos, just before reaching the neighbouring city of Badalona, is the Playa de La Mora. Everyone knows it as 'Playa Chernobyl' because of the old power station's enormous three chimneys rising just behind the beach, which together with the graffiti give the place an urban post-industrial feel. To get to 'Chernobyl Beach' the easiest way is to take one of the frequent Rodalies (suburban) train of the R1 line from either Plaza Cataluña or Sants and alight at Sant Adriá de Besós from where it's a quick 5-10 minutes walk. Also this beach is clothing-optional and there is some (discreet) cruising going on - there is more 'action' in the shrubs along the river Besós. 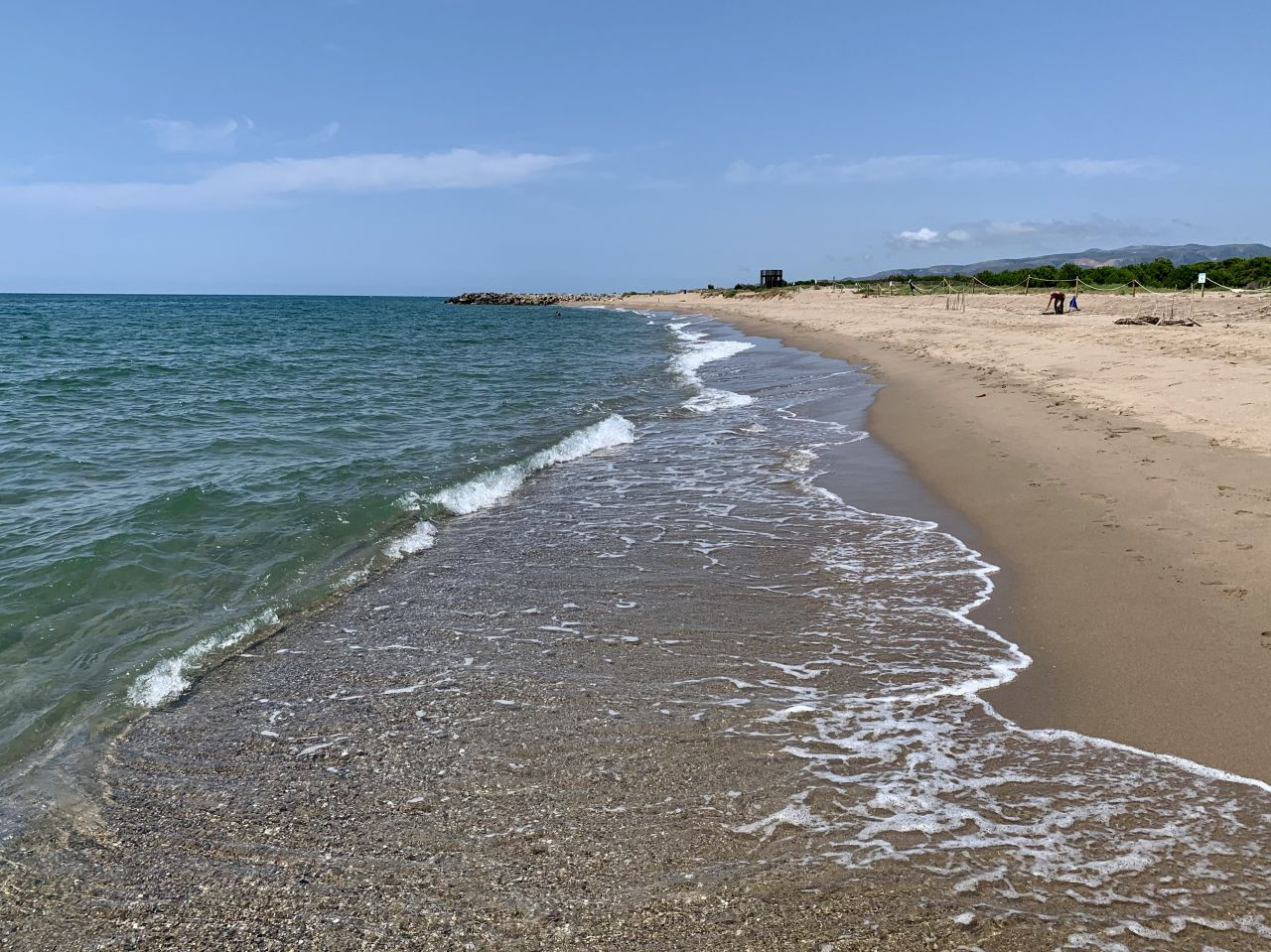 SOUTH OF THE CITY

One of Barcelona's best kept secret is the long stretch of sandy beach that runs along the airport area. If you don't mind the sound of departing and landing aircraft, that is. Perhaps the reason is that it's not the easiest place to reach on public transport. The two adjacent beaches of Les Filipines y Remolar are however very popular with the locals and they are so long and wide that they never feel crowded.

To get there: By car: park at the Filipines car park, off the C31 highway and then walk along the beach towards the airport. By bike or moped: apart from the above, there is an option to park a bit further north and then walk through the nature reserve directly to the Remolar Beach. By public transport: alight at the Airport's T1 and walk about 40 minutes through the nature reserve.

The beautiful town of Sitges offer three famous gay beaches. The first is the Playa de la Bassa Rodona - often known as 'Picnic Beach' from the name of the homonymous bar & restaurant, located at the end of the Avenida Sofia and in front of the Calipolis Hotel. It's the beach to choose to 'see and be seen'. On the northern side of Sitges is the also uber-famous Balmins Beach: as you come down the main access the area to the left is more 'family oriented', whilst the gays tend to prefer the right hand side. This beach and its lovely chiringuito are a landmark for the Bears community (and of course their many admirers). Whilst the previous two beaches are easy to reach from the rail station, the third beach is more difficult to reach. However the Playa del Hombre Muerto (or Playa del Muerto) is a small but amazing hidden cove with even some historical significance as it is considered to be the oldest nudist beach in Spain (since the 1930s) and with a chiringuito that has been there since 1970. If you have a car - or getting a taxi from the station, go till the very end of the Urbanización Miralpeix (follow the signs for the Dolce Sitges Hotel) and then was about 15 minutes through the pine woods.

To get there: By car: about 40 minutes on the C31 highway. By train: Rodalies R2 South, about 50 minutes from Sants.

An alternative to the hustle and bustle of Sitges' beaches is the nearby stretch of fine sand between Cubelles and Vilanova called Playa Llarga. This unassuming and very off-the-beaten-track wide beach rarely gets busy but the fine and light-coloured sand is quite inviting. The gay section of the beach is towards the Vilanova end, backed by a small bushy area across the railway. Note that there are no services so you need to take food/water.

To get there: By train: best option is to alight at Cubelles (Rodalies R2 towards Sant Vicenç de Calders, 55 minutes from Barcelona Sants or 10 minutes from Sitges) and then walk back north along the seafront and the railway towards Vilanova. By car: C31 till Cubelles and just before the town follow the signs for the Camping Platja Vilanova. 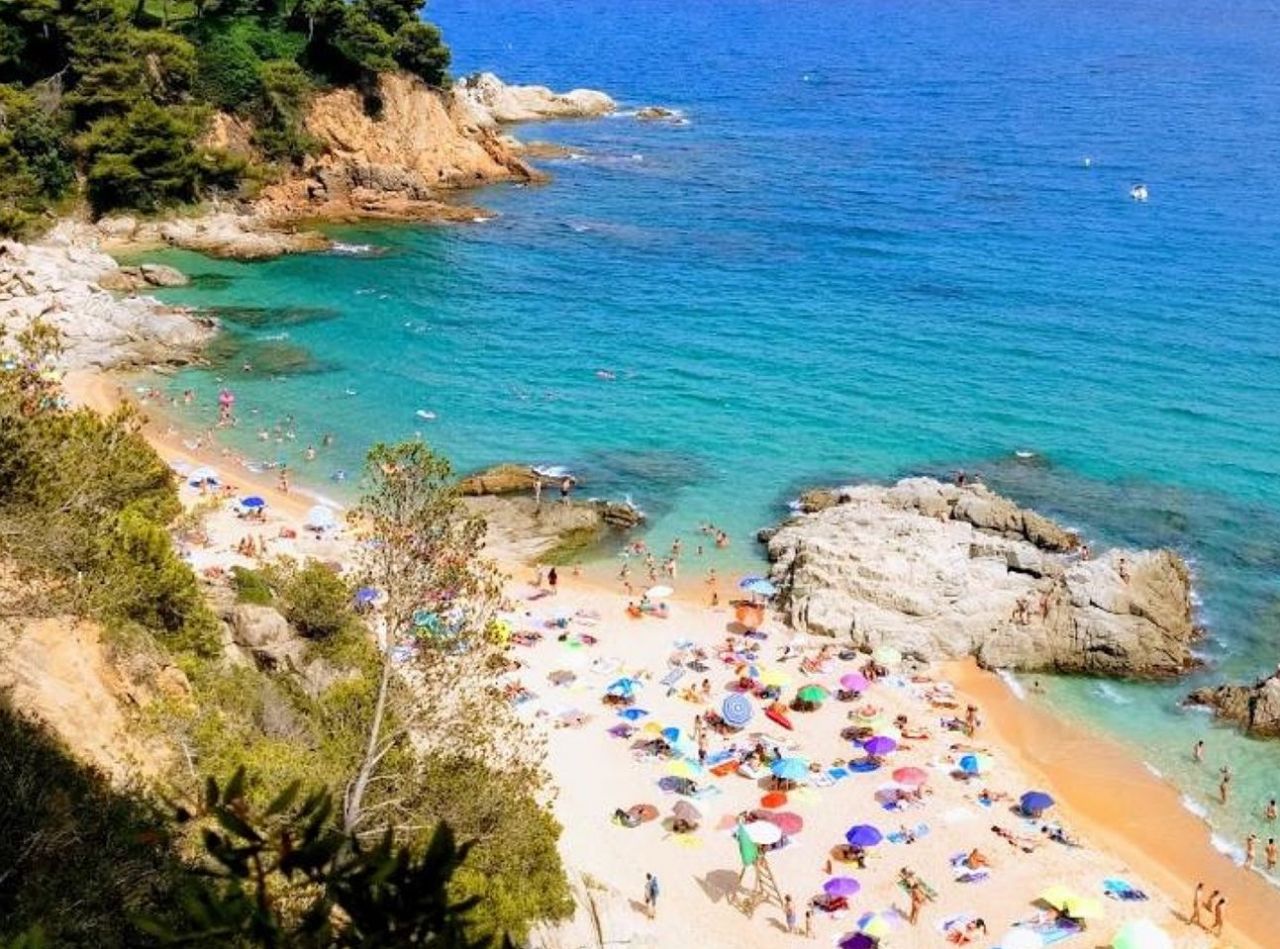 NORTH OF THE CITY

About 40Km north of Barcelona, between the two seaside villages of Canet and Sant Pol de Mar, along the N-II highway, the Playa de la Murtra offers another lovely gay-friendly hotspot not far from the city. The sand here is a bit grainy and dark brown-coloured so it offers quite a lovely contrast with the dark blue of the sea. The beach itself, which is clothing-optional, is not quite wide - but it is rarely overcrowded. There are no facilities, so you will need to bring water and any food you may want while here.There are also other gay-friendly beaches around the pretty village of Sant Pol, for instance the stretch of Playa del Morer towards Cala Grossa, just 15-20 minutes walking along the beach from the end of the sea promenade at Sant Pol.

To get there: By car: there is a small car park on the north side of the N-11 road, with a nearby underpass that leads to the beach: bear in mind that in the summer the parking is in short supply, especially at weekends. By train, the best option to get to Playa de la Murtra is to alight at Canet de Mar (Rodalies R1 line - 55 minutes from Plaza Catalunya) ad then walk for about 20 minutes along the coast North, towards Sant Pol.

The Costa Brava is a stunning stretch of coast that stretches from Blanes to the French border. Famous for its beautiful rocky appearance and secluded coves, it is a favourite for anyone who enjoys crystalline waters. The Playa de la Boadella (or simply Sa Boadella) is situated very close to the resort town of Lloret de Mar (70 Km from Barcelona). Awarded a 'Blue Flag', this clothing-optional beach is reached via a comfortable path and there are various facilities, including a chiringuito. This naturist beach, more commonly known as Waikiki Beach and located not far from the city of Tarragona - 80 Km from Barcelona, is only reachable by car, however it is well worth the trip if you fancy a dip in a relatively isolated location. To get to this beach you will need to either leave the vehicle at the northern end of Tarragona's Playa Larga or at Tamarit's Playa de la Mora on the Barcelona side, then walk through a few hundred meters along the coastal the paths above the cliffs into the mediterranean forest. If coming from the north there is a first cove called Roca Plana and the second is the Waikiki Beach. As the beach is quite difficult to reach, there are no facilities, so remember to bring water and any food you may want. Especially during the summer months the beach can be quite straight and family-oriented.

The stunning Playa del Torn in the list because it's quite a long way from Barcelona - a whole 120 Km to be precise. But it is in my opinion the best gay beach of the lot and it's well worth travelling the distance: it can be a (long) day-trip, in fact even better - a weekend escapade from the city. Over 2 Km long and situated about 3 Km south of the town of L'Hospitalet de l'Infant (travelling by train it's a 1h30m-1h40m journey from Barcelona Sants on the regional express towards Tortosa), this iconic (almost 100%) naturist beach has the advantage of being located in a stretch of coastline that luckily avoided the over-development that's so common around Barcelona. The long and wide sandy stretch is backed by a pines-covered mountain range and the sea water is pristine. Half way along the beach is the lifesavers station and just uphill, between the pine trees - is the highly ranked Chiringuito del Pep, where you can have a lovely meal or a drink overlooking the sand. From this point towards the southern end of the beach is where most gay guys prefer to be. Perhaps quite unsurprisingly the forest behind this stretch of the beach is also quite actively frequented.

Just above the Playa del Torn is one of Europe's best known naturist campings in Spain, El Templo del Sol. It offers spaces for tents, caravan parking lots and also self-contained bungalows, so it's a great choice if you wish to spend a few days in this idyllic location and make the most of this stunning beach. 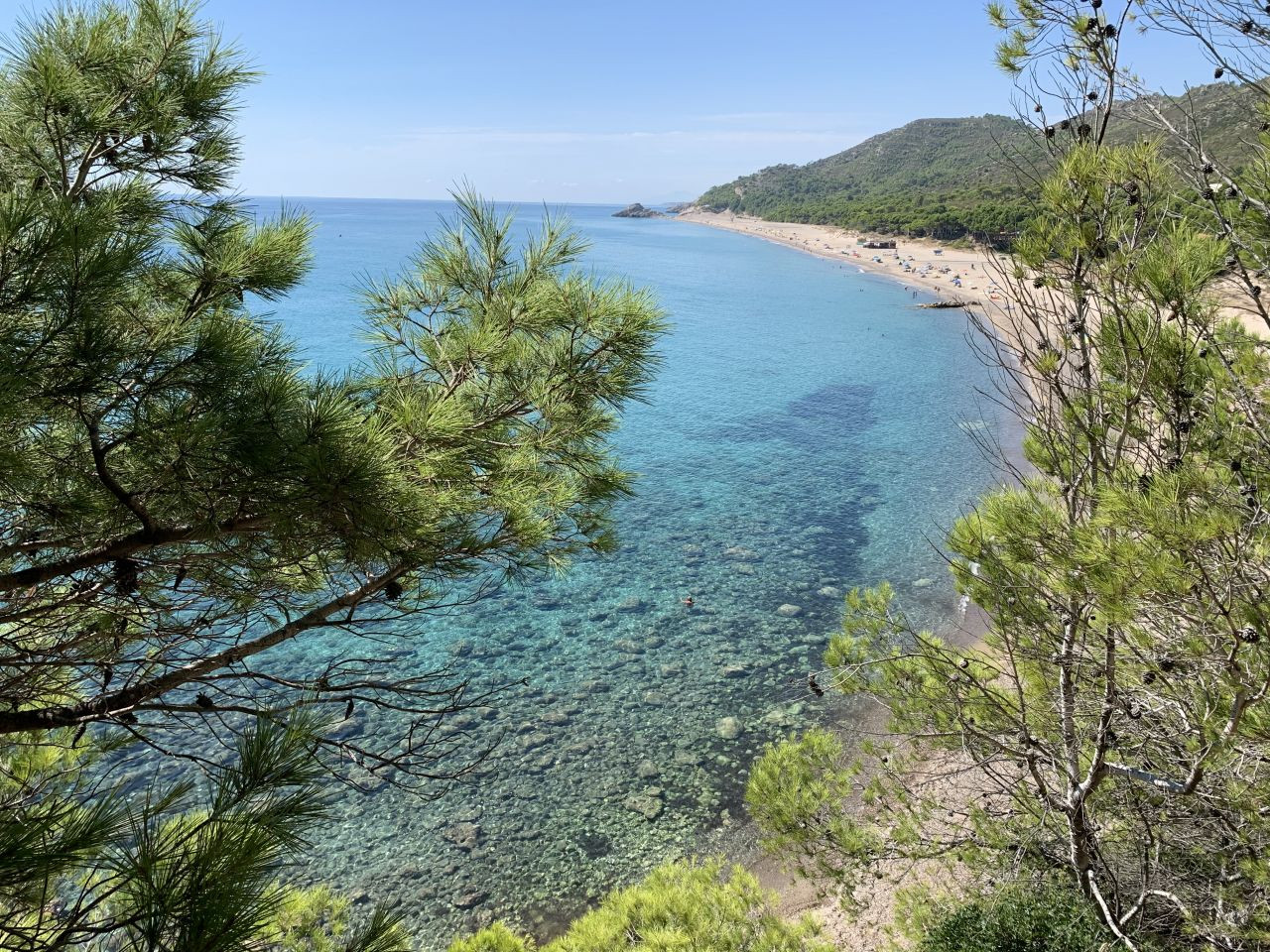 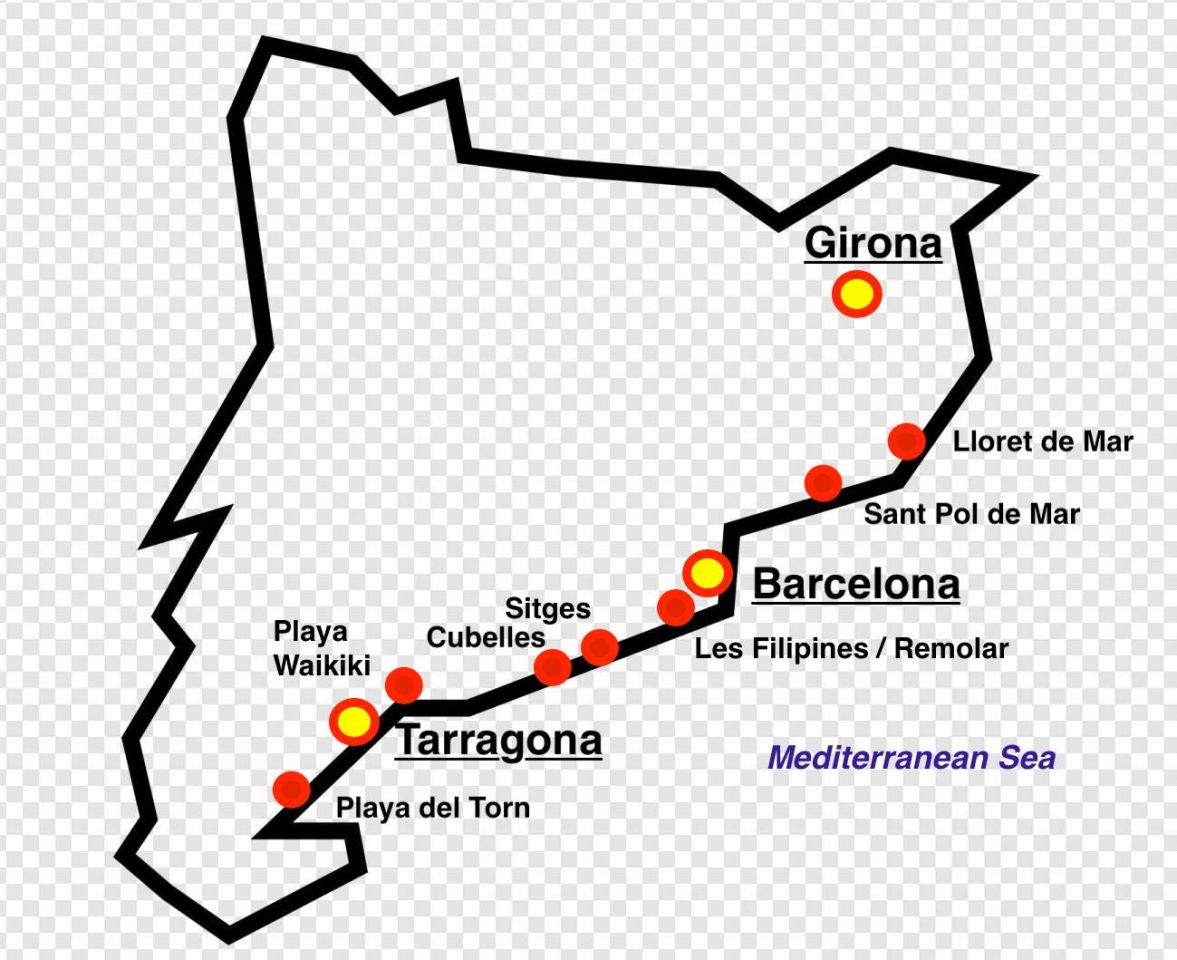