At only a handful of kilometres from Vienna, just down the Old Blue Danube, the city of Bratislava, the capital of Slovakia may not be such an obvious choice for a visit. Almost obscured by its three closest neighbouring cities – Vienna, Prague and Budapest, Bratislava is an interesting choice for those who want to have a go at discovering one of the lesser known European capitals.

As we realised on our recent visit, there is enough to see and do in Bratislava to keep one busy for a couple of days, but another option is to visit on a day-trip from Vienna, which is just about an hour away (see 'How To Get Here' below).

With a population of around 450,000 Bratislava is a much smaller city than its three neighbours and it's definitely less glamorous than them. But its small old quarter is a lovely treat, its imposing white castle atop a steep hill is pretty remarkable and what's best - pretty much free of mass-tourism. And whilst Prague or Budapest have quickly lost their Socialist era character, here in Bratislava there are still some old clues – for those who are curious to see what's left of those bygone times of the Warsaw Pact.

​For those too young to remember, from the end of WWII and until just over a quarter of a century ago in the short distance between Vienna and Bratislava laid a very sensitive border, a heavily defended and fortified line between the now defunct Soviet bloc and the Western world. Today almost every trace of that infamous border has been erased and the rather flat countryside between Austria and Slovakia (then Czechoslovakia when it was one nation with today's Czech Republic) blends seamlessly – with both countries in the EU and part of the Schengen area. And yet if you look carefully you can still spot a few hints still pointing to the existence of that border – rusty watchtowers and a few concrete bunkers – last remains of the Cold War.

On our visit we travelled by train from Vienna (Hauptbanhof) – it's a super-easy journey and there are two services an hour, one to Bratislava's main station (Hlavna Stanica) and one to Bratislava Petralska, which is in the south of the city. Generally, the former is closer to the centre of town. The journey lasts only one hour and cost about € 10. As we travelled in winter we could not take advantage of possibly the most spectacular way to get here from the Austrian capital, which is the boat service along the Danube River from Vienna's Schwedenplatz. This takes between 1h30m and 1h45m depending on the route and tickets start from around €20 – it operates between March and October.

Apart from Vienna it is also possible to get here rather cheaply by train from Budapest (2h40m) or Prague (4h). Alternatively you can fly straight into Bratislava from 22 destinations, including London, Manchester, Edinburgh, Birmingham, Rome, Milan, Madrid, Paris, Dublin and Brussels.

Once arrived in town, Bratislava is very compact and is easily walkable, especially the central area, which is where all sights are. Some advice though: if you arrive by train at one of the two rail stations or at the airport by air, we recommend to avoid the metered taxis as they often rip off foreigners by cranking up the meter – as we realised on our trip into town from the station!. Use UBER or public transport instead, both really inexpensive. If you decide to use a metered taxi, ensure that the meter is pushed back to zero before they set off.

​SOME HIGHLIGHTS OF OUR VISIT 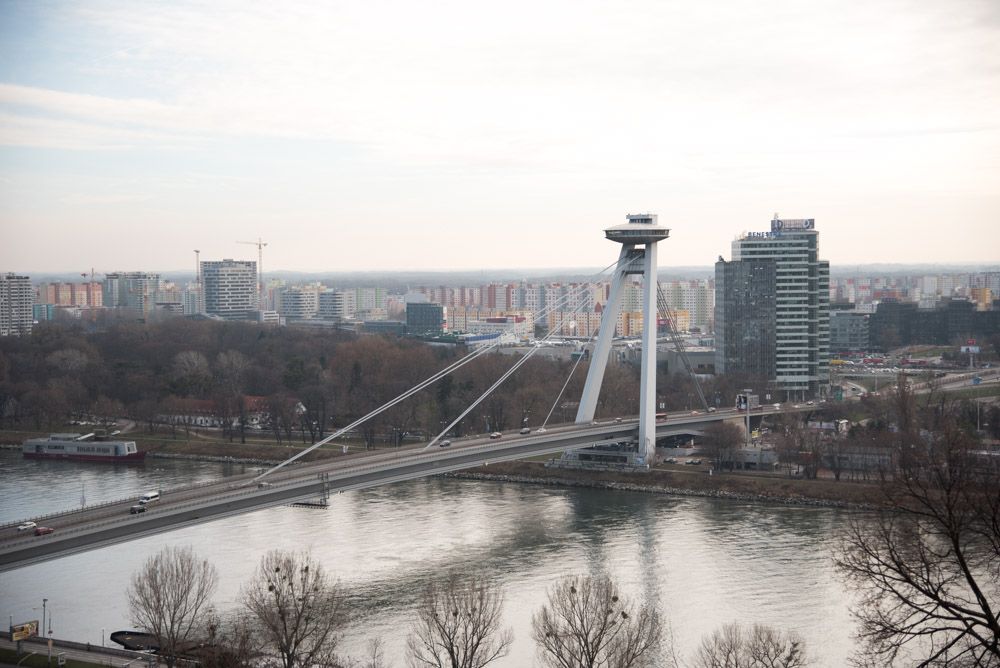 Unmistakably dating back to those Cold War times – 1967 to 1972, is the SNP Bridge (SNP stands for Slovak National Uprising). This huge modern bridge spans the mighty river Danube and connects the modern south side of the town with the old quarter and beyond. It's so massive that it literally dominates the city and the locals call it 'UFO Bridge' because it has a flying saucer – style concrete pod above its main pylons. Up there is a restaurant and viewing platform, with great views over the town. You can get a nice view of the old town and the Castle also from the pedestrian walkways that sit underneath the upper deck of the bridge. Unfortunately, the bridge's construction and the development of the highway that leads to it caused the demolition of part of the old town, in particular the Jewish Quarter. 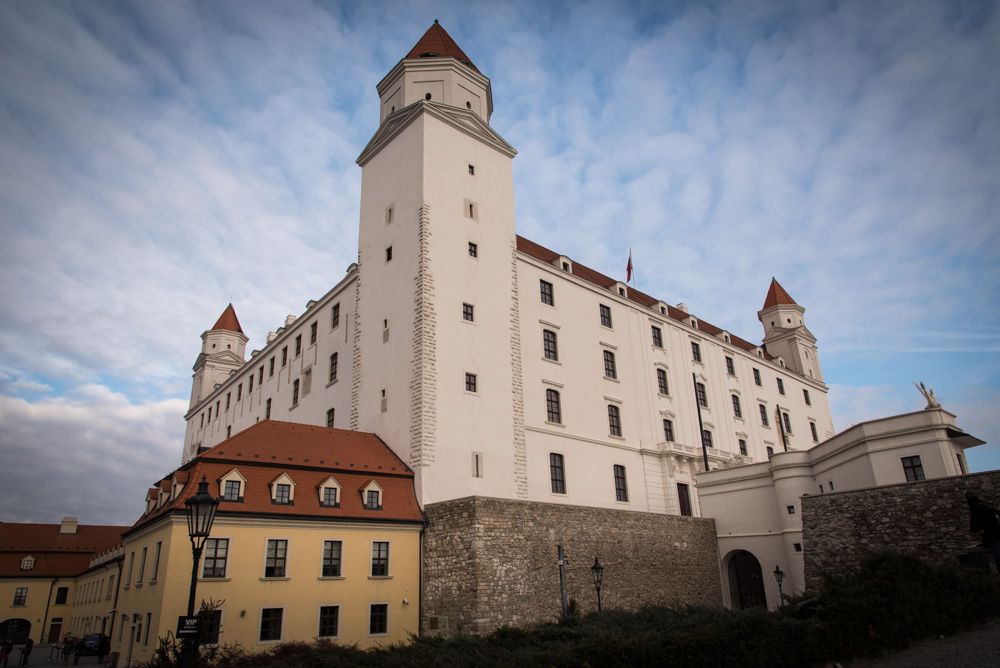 Sitting at the top of a hill dominating the city is the imposing Castle, which is visible from most of Bratislava and at night is bathed in floodlights. Even if you don't visit the inside of the building, which is quite impressive and has witnessed many events and coronations, it's worth climbing all the way up the hill it presides over to enjoy a great view across the city, the course of the Danube and, well, into the Austrian countryside. Some excavations have uncovered that there have been settlements here since the Stone Age – no doubt attracted by the strategic outlook over the surrounding area. Whilst the building to the north of the Danube are mostly low-rise, looking to the south you'll see a very densely developed area that dates back to the time of Communist rule – believe it or not they house over 100,000 people and are almost entirely made with pre-fabricated concrete 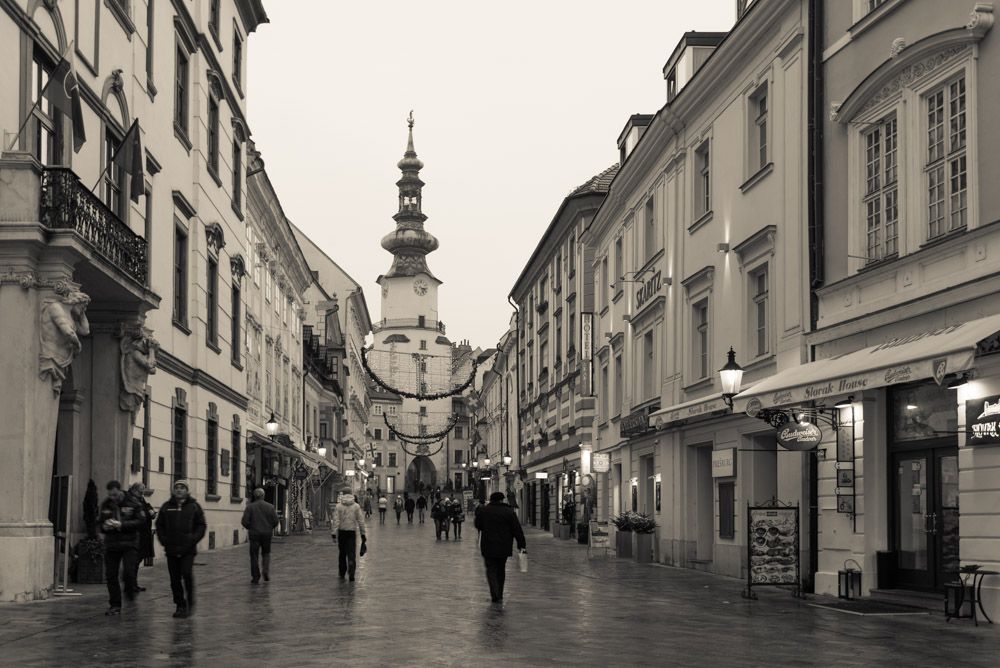 The Old Town of Bratislava is very pretty, almost fully car-free and is dominated by a few picturesque onion-domed churches and bright red-roofed public buildings. As mentioned above and unlike other cities like Prague and Budapest, its cobbled lanes are remain very much tourist-free, especially out of season. Enter the historical quarter through St Michael's Gate, the only remaining Medieval access and make sure you stop in the lovely main square, with the Old Town Hall. Between late November and the end of the year this is where the main Christmas market takes place. Another interesting spot is the St Martin's Cathedral, which has been the site of the coronation of all the Hungarian monarchs since 1563 and for almost 300 years. 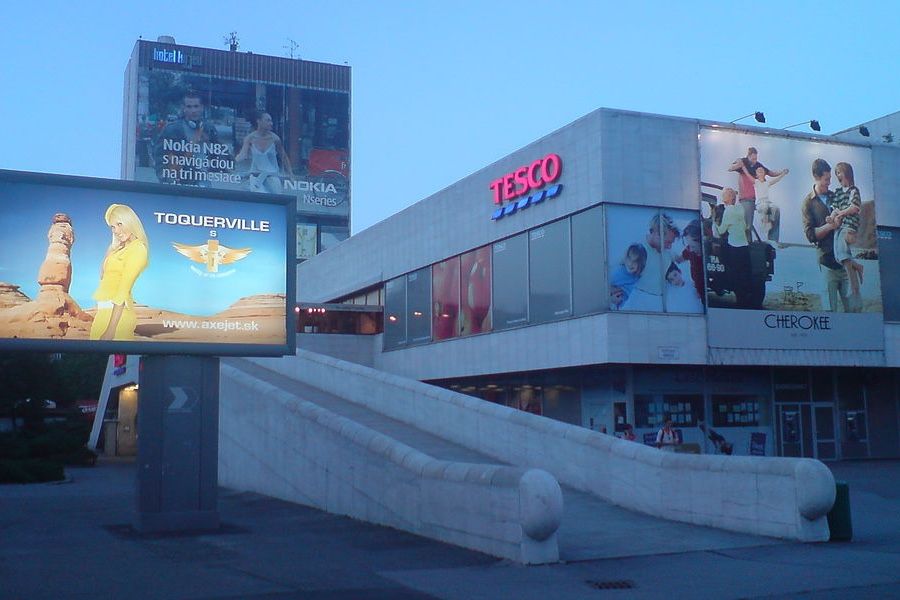 If you want to have a good taste of old Socialist-era Bratislava, then you may want to head to the Kamenné Square, which is one of the best preserved examples of Soviet-style modernist architecture from the late 1960s. Here there is a big shopping mall – now mainly occupied by a Tesco store, and the towering Hotel Kyjev, which in the Socialist period was the main place to stay in town, especially for the few visiting Westerners. Curiously enough the hotel's interior décor of the time has been maintained in full, complete with dubious flimsy curtains and 1970s Communist-style furniture – a formidable time capsule! However, sadly after being purchased by a real estate development company, the hotel closed in 2011 and it is not clear what is going to happen next. Let's hope they reopen it – and keep the style of course (much like the Hotel Royal in Copenhagen, which is popular for its 60s charm and 'Scandi Design')!

It'd be a shame to lose such a vivid testimony of that period.

Unfortunately, Slovakia is running slightly behind many EU countries when it comes to LGBT+ rights, especially when compared to the neighbouring Czech Republic, which has a much more liberal attitude. Same sex partnerships are not recognised here and as a matter of fact there is even a constitutional ban on gay marriage. Anti-discrimination protections are however in place and there have been attempts to pass legislation to enable civil unions. Thankfully, especially in Bratislava, attitudes are pretty relaxed and visitors will not usually be challenged or confronted because of their sexuality.

There is one main LGBT venue in the city – and also one sauna.

Teplaren Café - Zámocká 7074/30 – A small but busy café on the road that leads to the castle featuring many regular events, including some lesbian nights. It's a great place to pop in for a cold drink in the summer or a nice hot coffee in the winter and they serve some light snacks too. They also organise a regular dance event at the River's Club every two months, playing mostly house, deep house and techno sounds.

Club Sauna Expert - Živnostenská 4 – This is a small sauna but being the only one in town it is also quite popular with the locals, especially when they have a special event, such as the 'Naked Sunday' every two weeks.

HomoMat @ Club Re;Fresh - Ventúrska 5 – This party happens every two months and is currently held at Club Re:Fresh, in the Old Town. House music and sexy men are the recipe for this successful regular gathering. 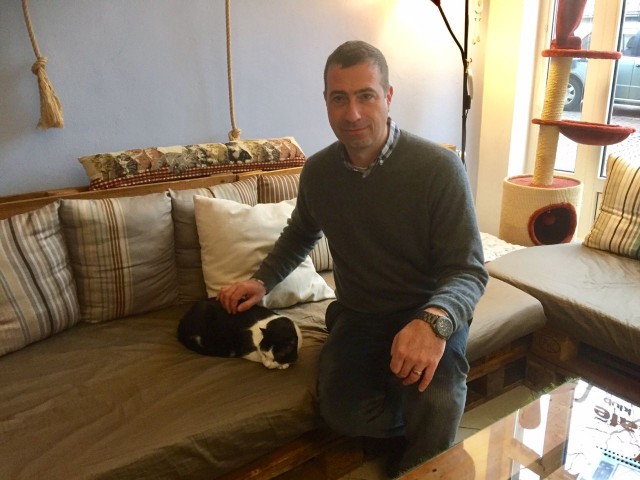 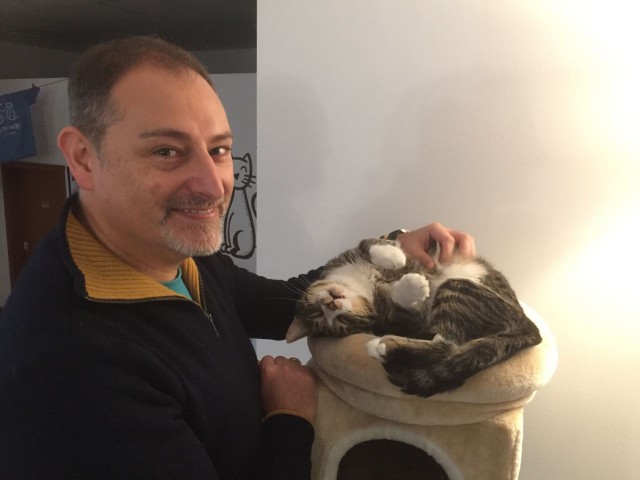 AND FOR SOMETHING QUITE DIFFERENT…

On our last trip to Bratislava in December 2016, we found a little gem - Mačkafé, which is the city's feline café. Located just up the road from the Teplaren gay venue, it is a relaxed environment where you can have a cuppa and a slice of cake enjoying the company of the ten or so gorgeous cats who live there. And they are very friendly creatures indeed, as our pictures below show…

And not just that – by visiting the café you also support the association that protects and supports the little furry friends in Bratislava. Definitely purr-fect!