Brighton: Gay by the Seaside 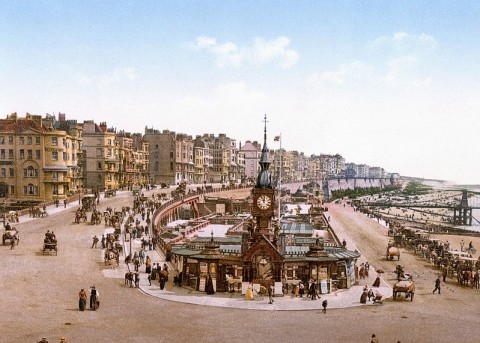 The seaside city of Brighton, on the south cost of England is today recognised as one of the LGBT hotspots in the UK. Its Pride is one of the most popular in the country and a recent survey has estimated that between 11 and 13% of the city's residents identify themselves as LGBT. The proximity to London, just about an hour away by train, means that there is also a considerable exchange between the two. In fact one of the reasons for Brighton to become a LGBT hotspot is to be found in the railway line itself, which opened in 1841 - it goes without saying that the fast and easy train journey to and from London, coupled with an endless supply of hotels and guesthouses were reasons enough to launch the city as a great place for an illicit flirt, be that a gay or straight one!

Brighton's past as a top holiday destination in the Victorian period is today visible through the beautiful grand squares and row of white imposing buildings, plus some grand old hotels, true witness of a bygone age.

In those days gay or lesbian relationships were naturally kept very much private and it was difficult to distinguish them from very close and intense friendships - the borders were often deliberately blurred. Close friendships between ladies weren't perhaps as scrutinised as in the case of gentlemen and there are accounts of many intense relationships that blossomed in Brighton, such as the one between philanthropist Angela-Burdett-Coutts (who set up the Columbia Road Market in London) and her companion Hannah, who regularly spent part of the year at Brighton's Royal Albion Hotel.

During the pre-WWII years Brighton became the leading place to have fun - this was at a time when package holidays abroad did not exist and most people would spend their free time closer to home. Having fun meant for some looking for opportunities to enjoy the company of same sex partners - though of course we have to remember that this would have been done in a very discreet way, as homosexuality was then illegal and severely punished. And yet there were events that managed to fly below the authorities' radar, like ladies-only grand balls and a even a few bars for gay men were set up, such as the Star of Brunswick (which has been converted into holiday flats a few years ago).

During WWII the abundance of troops stationed in the coastal city were an obvious magnet for gay men and of course the obligatory blackouts and the fact that the police were occupied by more pressing security issues than actively repressing homosexual behaviours combined to provide a cover for such activities. Many armed force personnel came to Brighton attracted exactly by this situation and quite a few of them stayed after the end of the war, creating a discreet but large LGBT community for those days. The end of the hostilities and then the end of rationing in 1954 put Brighton back on the holidays map. Not just families came over - by now a lot of guesthouses had gay or lesbian owners who would allow same sex guests to stay without fear of harassment (or arrest, or course). 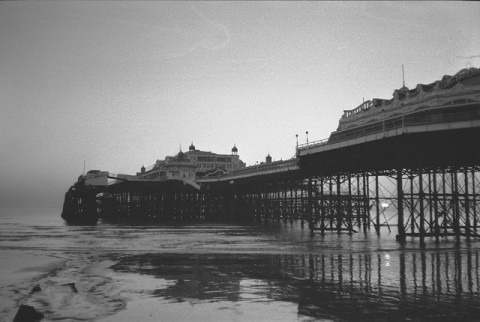 The now-defunct West Pier in the late 1960s 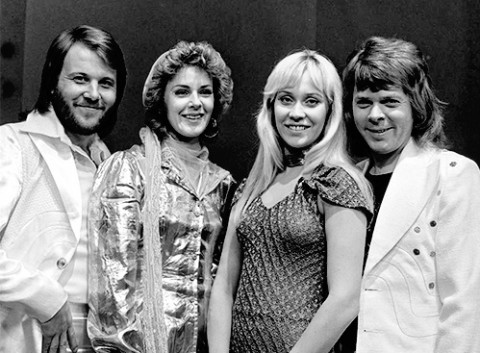 In the 1950s and 1960s it was difficult to find out about LGBT gatherings - there was of course no advertising of this kind possible and the knowledge of bars, events and gay-friendly lodgings was pretty much down to personal recommendations and tips. In fact things had to be kept very discreet: the police would often raid businesses they suspected of offering shelter to gay people and the local paper, the Evening Argus was more than willing to publish names and addresses of those found in compromising situations. In those days this would have had pretty harsh consequences on one's job and personal life. Still, there were plenty of clubs and pubs catering for those who wished to run the risk.

Towards the end of the 60s thing started to change - homosexuality was partially decriminalised in 1967 and thus it became possible to advertise publicly the existence of LGBT establishments. At the same time people became more interested in politics, also because of the Gay Liberation Front, the Stonewall Riots and part of a more extensive civil and women's rights movement. The first Gay Pride was held in Brighton in 1972 - but it was a one off: the next Pride did not happen until 1992.

A major event in 1974 was the Eurovision Song Contest, which was held in Brighton on April 6th. The winning entry was the now iconic 'Waterloo' from the then little-known Swedish band ABBA!

The 1980s brought the plights of HIV/AIDS to Brighton. The large gay population residing in town meant that the impact of the epidemics on the city was enormous, with the first casualties recorded in 1983. At this time of extreme difficulty the community managed to get together and created a network of support for those affected, their partners and families. Sadly the plight for our community increased further with the passage of Section 28, which the Margaret Thatcher's government set up to stop local governments 'promoting homosexuality', which in turns risked stopping HIV-prevention programmes.

By 1992 the LGBT community was strong and numerous enough to be able to organise its first Pride, in Preston Park, but it would be in 1995 that the Pride board managed to get the support of the local businesses and started transforming the event into a magnet for people beyond the city itself. Maybe one of the factors for the ascent of Brighton Pride are also to be found in the financial and administrative difficulties that London Pride encountered in the late 90s - many Londoners decided that it was a lot better and entertaining to attend the Brighton event.

What changed most in the 1990s is the attitude of the local council, the police and even the local media. From ostracism the mood changed and LGBT activities started to be encouraged as part of the promotion of a diverse and vibrant city. Today Brighton is still dubbed 'London by the sea', but it has become even more established as a city with its own culture and personality. There are many interesting sights, such as the famous Brighton Pavilion, which is a former royal residence whose construction, an intricate and exotic oriental fantasy with domes and minarets, began in 1787 for the future King George IV.

Another lovely area to spend an afternoon is the Brighton Lanes, an area of narrow alleyways and small squares which date back to the 18th century and correspond to the original ancient settlement of Brighthelmstone. Around this area you will find antique and curiosity shops, small bars and restaurants. If you prefer more alternative shops, then you may want to head to the North Lanes, which have a slightly more eclectic collection of outlets. 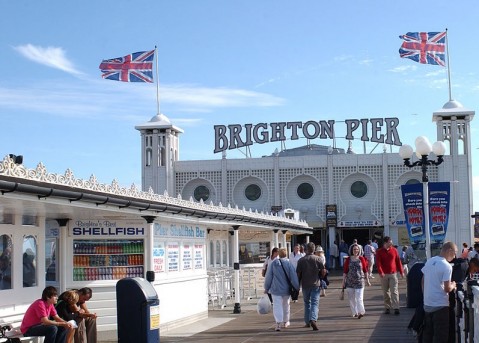 A day in Brighton needs to include a walk along the Palace Pier, now better known as Brighton Pier. Brighton used to have two historical piers, but unfortunately the West Pier was closed to the public in 1975, despite being listed as Grade 1 and fell into disrepair. A succession of storms and suspicious fires completed the damage, so all that is left today are some charred and rusty remains. The Brighton Pier is still open and it's a recognisable city landmark since its construction in 1899, despite it too had a few setbacks, including a fire in 2003.

The seafront skyline of Brighton is now undergoing a massive change with the opening of the i360 structure in the summer of 2016, a vertical glass-made observation car that will slowly lift passengers to 460 ft, offering amazing views along the coast and the city. 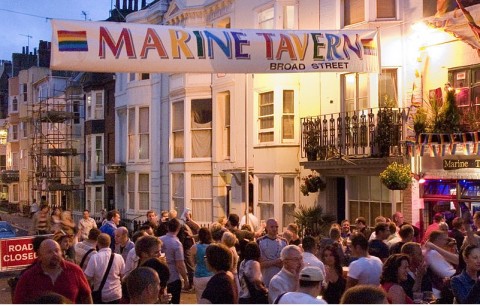 Brighton's gay village is huddled around Kemp Town, a stone's throw from the seafront and the Palace Pier. Here there are some stalwarts of the local scene, such as Legends, which has a lovely sea-facing terrace, plus a basement club that gets very busy at weekends. You can also stay here for the night as they also have rooms to let. Another favourite since 1991 is Revenge which features great club with special guest DJs and a bar - a fab pre-clubbing spot. For those searching a more traditional pub atmosphere we suggest the Bulldog which has been a fixture on the local scene since 1979. Another recent addition is Charles Street and the Envy Club, which has a trendy and attracts a young clientele, especially the seafront bar & restaurant.

Sadly one of the clubbing landmarks of Brighton since the early 1990s, Wild Fruit, is no longer organising regular parties, though it does pop up every now and again with special one-off events, often on special dates. They still organise a uber-popular dance tent at Brighton Pride: in fact so popular that the queues to get in are pretty legendary themselves. The history of this club is quite amazing - names who have graced the DJ box include Seamus Haji, the Freemasons and Fat Boy Slim to name a few…

A great source of information for current events in Brighton and the surrounding area is the local GScene magazine. 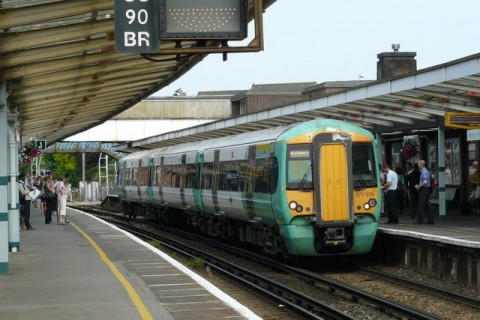 GETTING TO BRIGHTON from London is really easy and there are frequent trains every day, including weekends. Most trains depart from Victoria Station with Southern Trains but there are also services from London Bridge or London Kings Cross / London Blackfriars (operated by Thameslink). The journey lasts about an hour from Victoria or London Bridge. Check National Rail for information & prices.