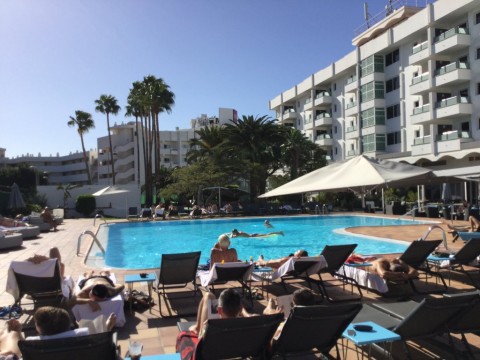 Choosing to fly to Gran Canaria for New Year's Eve 2016 came after a pretty long debate. We spent the previous one in Berlin; a truly memorable and enjoying event. However we wanted to do something a bit different for the next one. Almost every destination in Europe boasts a great party for New Year's Eve. Cities almost compete on who has the best fireworks, the best nightlife, the most sparkling events to ring in the new year. Still, they cannot change the fact that it's mid-winter and we actually fancied some sunshine - or at least some milder temperatures. But at the same time we wanted to enjoy a location where we didn't have to endure a very long (and possibly very expensive at Christmas time) flight. Or locations where we had to pretend to be 'friends'. It might be OK at other times, but maybe not on New Year's Eve.

And in the end Gran Canaria it was. An easy four hours hop from London - same time zone too, so no jet lag to be endured. With the late December daytime average temperature hovering around 21-22 C, it sounded like heaven.

I was personally very curious to see what Gran Canaria was really like – as everyone else I have heard innumerable stories about this island. The tackiness, the cheap beers, the high-rises accommodating the endless stream of northern European package holidays customers... and so on. But we know that nothing beats one's own experience. After all I have been to places so highly recommended just not to find them so special after all, and vice versa. It was the perfect opportunity to find out the truth.

We arrived on a hazy and warm afternoon and I must say that it immediately felt so lovely to strip out of the winter jackets and feel the warm air on the skin. We took a taxi and in a few minutes we got to our hotel, the Axel Beach. The first impression of Maspalomas was quite a surprise because I was expecting a very extensive sprawl of high rises and 60s & 70s style concrete monstrosities, but most of Maspalomas is actually made of low rise buildings, a lot of them bungalows with pretty private gardens around them. Yes, there are large multi-storey hotels, but thankfully they don't seem to be clustered a la Manhattan.

Axel Beach is an old apart-hotel (it was once called 'Liberty Apartments') that has been somewhat refurbished. I am saying 'somewhat' because the units' kitchenettes are still the original ones, though the interiors have been redecorated. The apartments' size is pretty decent and they have balconies either looking over the pool & gardens or the road. The pool area is lovely but I kept thinking that it was a bit of a pity that the hotel could not find more uses for it. By sunset the pool looked lonely and dark: no music, no chillout drinks - and it felt a bit like a lost opportunity. Perhaps it's different in the summer?

However the hotel is very close to the Yumbo Centrum, yet distant enough from it not to be blighted by its noise and crowds. The famous Yumbo Centrum – once again, I had heard a lot of stories about it. And yes, perhaps it's not the prettiest building in town: opened in 1982 it has aged a bit too but I did not find it as architecturally offensive as I had expected.

In that respect the Yumbo is a great thing – no trying to find a taxi to go from one venue to the next in a semi-drunken state. And if you end up in the wrong club, or in the wrong bar, or amongst the wrong crowd then it's often just a case of heading for the door and try the next venue up the pavement. Or the one after. And so on – there are so many bars that one is spoiled for choice.

In a way I found Maspalomas – and the Yumbo in particular, almost reassuring. Unlike other gay travel destinations, the crowd here was pretty relaxed and mixed. I didn't perceive the sometimes pervasive smell of body fascism that I witnessed in other places, the 'us & them' sort of feeling. I actually loved the simple 'ordinary gay crowd' around. Little attitude often means more relaxed fun.

We've eaten out at the Yumbo most nights and whilst the quality of the food at times was just above the 'passable', it was most definitely cheap. Dinner for two with wine for €50 is a bit of a steal for us Londoners used to pay £5/€7.50 for a sandwich from Pret a Manger.

After dinner, as mentioned, there is a plethora of bars and cafes to head to. 'Six Pack Alley' is home to six of the most frequented gay bars in the Yumbo, including Parrots. But there are bars all around, some more generic, some other more themed and quite a few with regular shows. For instance just coming out of Six Pack Alley and turning right is a parade of bars attracting a mostly German clientele. Across the middle garden is the Barenhohle, for bears and their admirers. On the far (south) side of the middle garden there is another row of bars on two levels, some with live drag and cabaret shows and some cruise bars (The Cellar, Construction Bar, etc). Up one level above Six Pack Alley is Sparkles Bar and its shows – possibly the campest thing in Gran Canaria (and that's saying a lot). Opposite the Construction Bar is the Bunker: it gets busy late (when the other bars supposedly quieten down) and two staircases lead to a basement with play areas, some cabins, sling and more or less dark areas.

And talking of drag & cabaret shows there are plenty of them here. They say that drag is becoming outdated and out of favour - well, not in Gran Canaria! From Sparkles to Terry's Bar, from Kiki to Ricky's it's showtime galore, every night. And with audience participation, of course.

No trip to Gran Canaria is complete without a trip to the dunes of Maspalomas. I had seen a few images and imagined quite a few of them, but there actually  - an awful lot of them, in fact over 400 hectares of shifting golden sand dunes. Enough to get lost - or to pretend to be in a scene of Lawrence of Arabia. And yes, there is a gay nudist beach at the southern tip of the dunes and related cruising - the two seem to always go together don't they? There is a small wooded area where things happen. There is also a pretty lighthouse with a splendid view at sunset.

On one of our afternoon walks - in fact walking back from the dunes, we ended up in a pretty tack-tastic shopping mall, the Cita Centre. If you thought that the Yumbo Centrum was tacky, then Cita goes off the scale. Opened in 1970, its designers must have thought of honouring the many European visitors by recreating mini-versions of their most famous landmarks covering all the external perimeter of the shopping mall. Hence Big Ben, the Leaning Tower of Pisa (behind which lurks the entrance of the Secrets swingers club), the Eiffel Tower, the Brandenburg Gate and so on. Tripadvisors reviews marked the place as 'scary' - we thought it was actually quite funny. We're also told that one of the gay cafes on the first level - Cafe Wien, is a favourite for cakes and late afternoon / evening drinks.

So what to make of my Maspalomas week? Well, I am definitely coming back, definitely undeterred by it tackiness, in fact having quite enjoyed it. The reality is that being tacky is not necessarily a bad thing - as long as you embrace it and have a good laugh. And that's what makes the difference between tacky places that want to sound pretentious and upmarket (but they are not) and places that are also tacky and they are not afraid to boast it. Go Gran Canaria! 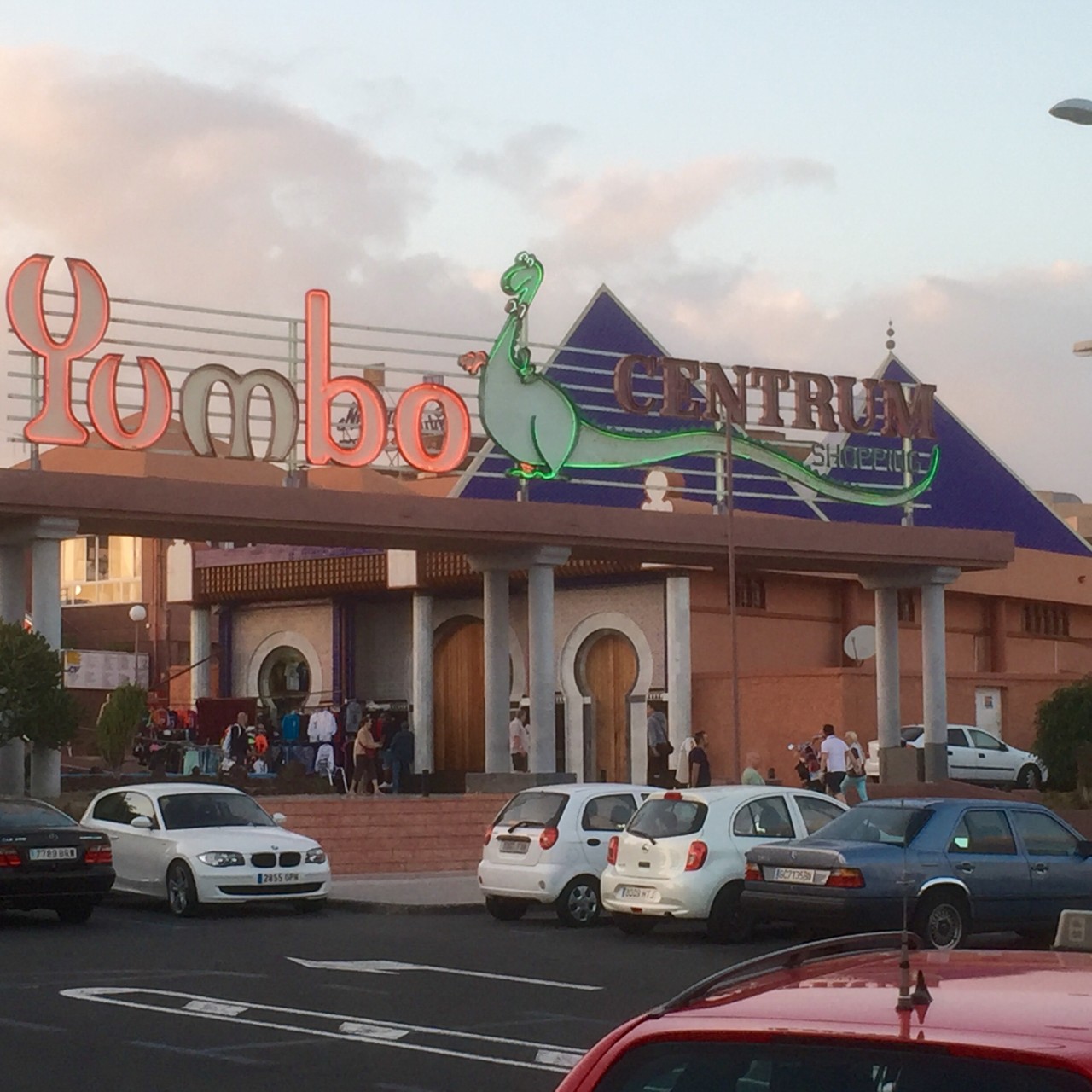