Turin, the capital of the Piedmont region in the northwestern corner of Italy, has enjoyed a brief moment basking in the international spotlight when it hosted the winter Olympics in 2006. But as often happens with these large events, the glory dims almost as quickly as the ritual flame is extinguished and the circus moves on. As the weeds grow on the olympic stadia, one wonders what was all the fuss about…

And yet, Turin is a city that has given the world a lot more than a bit of Olympic glamour and glory. Ever heard of Fiat cars? And Nutella? Ferrero Rocher? Martini & Cinzano? Lavazza coffee? Eataly? And I could go on… All these things and many more, all come from this busy city and its region. So perhaps it's really time to give Turin another look. Which is what I did with my husband this winter when we travelled to the Piedmontese capital for a few brilliant days discovering the city, hosted by local tour operator extraordinaire Jo-In.

But why is Turin so captivating, you may wonder?

It's got an amazing history

Although as a geographical and cultural concept, Italy has had an identity for many centuries, politically it's a different story; as a country it has only come together little more than 150 years ago. Turin was Italy's very first capital, from 1861 to 1865, after which the title went briefly to Florence and then Rome from 1871.

The royal dynasty that brought the Italian nation together, the Savoy, have also been responsible for turning Turin into a rich and important city from the 1500s onward. That's because despite its ancient Roman origins (its name was Augusta Taurinorum - hence the Taurine name), the city remained quite in the backwaters until the unflappable Duke Emanuele Filbert (aptly nicknamed 'Iron Head') decided to move the capital of the Duchy of Savoy from the French city of Chambery to the other side of the Alps, to Turin, in 1563.

With the status of capital the city became more and more important as the Duchy itself added (or 'grabbed' perhaps more accurately) additional land to its rule. It later became a proper fully fledged kingdom and in the 18th century the city was totally re-designed with a grid-like structure, ample streets, long and elegant porticoes and large, majestic squares, to befit its new role in Europe.

Today, Turin maintains its regimented elegance, style and flair. Walking through its centre you will feel a certain Parisian flavour, a definite Viennese class, with an austere and functional touch which is possibly a most enduring trademark of the Piedmontese people.

A city of reinvention

Turin is still today one of the industrial powerhouses of Italy, but it was in the 1950s and 1960s that the city grew exponentially with thousands and thousands of immigrants descending from trains every single day at its grandiose Porta Nuova Station, leaving the poorer regions of the South to work in the Torinese factories. Turin is very much a city of immigrants, built and made rich by immigrants and with a heightened sense of respect for diversity, even in these days of hardened attitudes towards migrants. Migrants that today come from other regions of the world, of course.

As times changed, some industries moved away, but Turin managed to reinvent itself, converting many old factories in new and trendy spaces, where new skills and talents are explored. We visited a couple of these spaces during our journey - such as an old tannery that now house among other things a brilliant apprenticeship school, where young people develop great skills, from beer making to haute cuisine. Or a disused electric cables factory that is now being turned into an innovation centre. 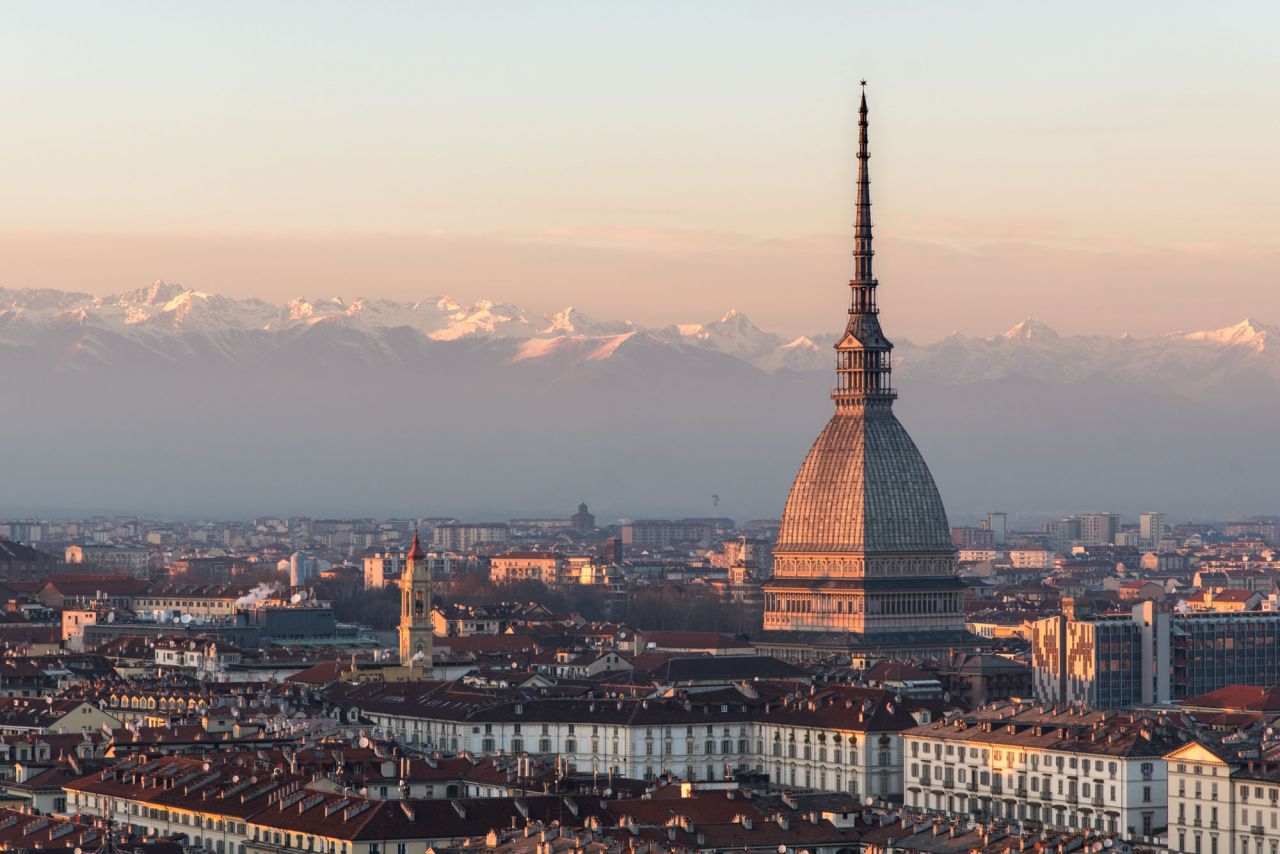 The grid-line structure the Savoy imprinted on the city make Turin an easy city to walk around, even when it rains, with its long porticoes. Towering above the city is the huge 167 metre high spire of the Mole Antonelliana, whose history is quite curious. In fact the spire was not in the original plans of this building which was designed to be a Synagogue in 1862. However, due to disagreements between the Jewish community and the architect Alessandro Antonelli, the former decided not to progress with the project. Faced with a half-built work, the Council picked up the tab and the work completed in 1889. Today the Mole houses the Cinema Museum, but its most quirky reason to visit is to ascend to the lantern via a glass elevator, rising in the middle of the dome, though I'd probably say that this might sound like a nightmare to a vertigo sufferer!

The city's architecture is reflected in the beautiful buildings, such as the Savoia Royal Palace, Palazzo Madama and Palazzo Carignano. Just outside the city is the huge Venaria Palace, which was originally the Savoia's hunting lodge. Perhaps unbelievably, this UNESCO listed residence lay almost forgotten for decades, but now it has been returned to its original Baroque splendour.

And also just outside the city centre is the stunning Superga Basilica, which apart from being in itself a superb work of art, is also positioned on a hill from which a great view of Turin can be enjoyed on those (rare) clear days - Turin is known for its haze and fog, especially in winter. Another great place to enjoy a bird's eye view of the city with the snowcapped mountains in the background is the Cappuccini Hill, just on the other side of the Po River, which offers stunning views across the city. 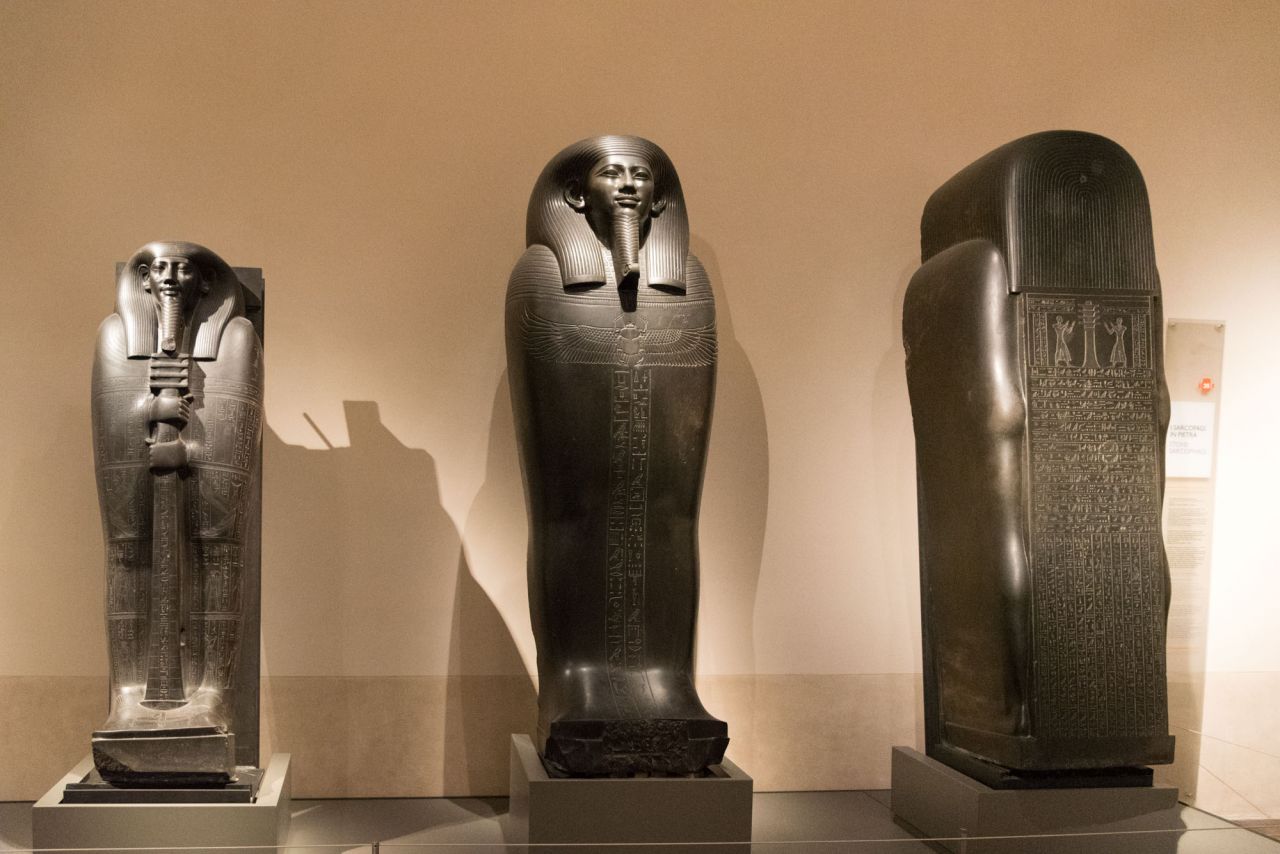 You may have been to many museums around the world and surely you have seen a few mummies and sarcophagi there. You may even think that most Egyptian art outside of Egypt is stored at the Louvre or at the British Museum. But you may not know that the most important Egyptian museum in the world after the one in Cairo is actually in Turin! Yet another creation of the Savoy dynasty, the stunning Museo Egizio has been given a complete makeover in 2015 and so it's now grander and more spectacular than ever. If it's not the size of the collection (30,000 items) to speak of its importance, it's the variety that is really without compare; here you will find the whole history of ancient Egypt represented, from the very beginnings till Cleopatra. We stood in complete awe in front of the display of the funeral collection of Pharaoh's architect Kha and his wife Merit; these objects included original clothes in stunning condition, recognisable foods and even an incredibly preserved wig. It felt unreal to think that all these items were almost 3,500 years old! I am not exaggerating when I say that the Museo Egizio alone is a great reason to visit Turin…

And to think that the Savoy's passion for Egypt started with a mistake: in 1630 King Carlo Emanuele became fascinated by an object - a marble altar table - that he thought was from ancient Egypt. He was so enthralled by this artefact that he sent an envoy to Africa to buy more of the same antiquities - those that now form the nucleus of the museum's collection. What the king did not imagine is that the much revered altar table was actually a Roman imitation. Nice - yes, but not Egyptian… Oops… 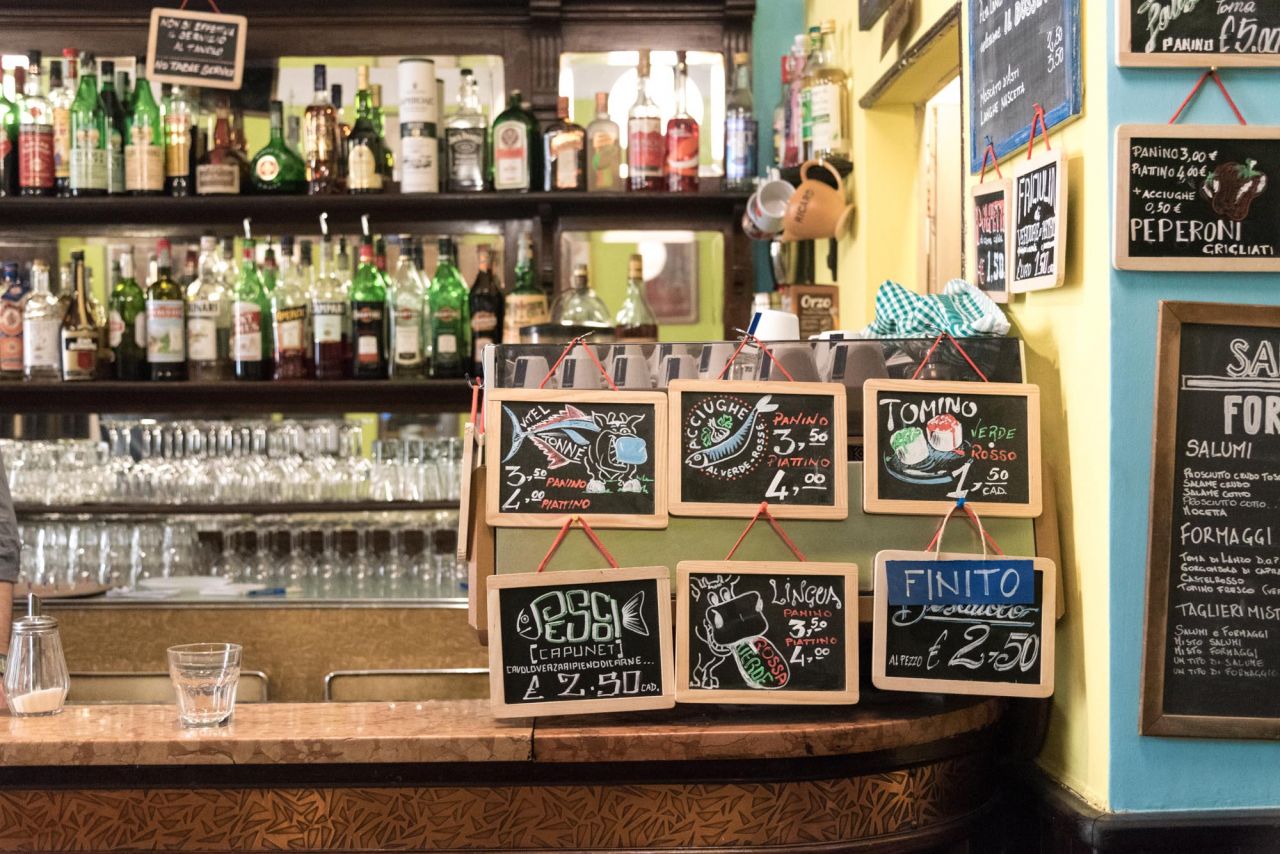 In 1946, Pietro Ferrero invented a cream of hazelnuts and cocoa - his son Michele relaunched his father's recipe as Nutella in 1964 and the rest is history. Today Ferrero is one of Piedmont's most iconic brands. But it's not just Nutella, Rocher and Kinder Surprise. Turin and its region gave the world some of the most iconic food and drinks. Let's start with alcohol - shall we mention Vermouths like Cinzano or Martini? The history of these beverages is as old and fascinating as the Savoy city itself: during our stay we took part in a fun and informative Vermouth Experience, organised by Jo-In Tour Operator and Esperienza Vermouth. Our fantastic hosts also took us for a drive around the Langhe region, just south of Turin, where superb world-famous wines like Barolo, Barbera, Barbaresco e Nebbiolo are produced. Of course, there was plenty of sampling and a hearty lunch too! And lunch must be followed by a coffee - Italians are pretty much crazy about their brew - the caffè ritual is sacred from north to south, but two of the most iconic brands of coffee come from Turin, Lavazza and Vergnano. And talking of brews, the Torinese way of doing coffee is called 'bicerin'; that is a layer of hot chocolate, a layer of espresso and a layer of cream - in a small glass. Yum!

When you're in Turin and Piedmont more widely, you get the feeling that good food and wine is taken as seriously as religion: let's not forget that ever-expanding chain Eataly started right here, evangelising the culture of 'slow food'. In fact it's pretty much impossible not to eat and drink well in Turin. But don't think that it comes at a cost: most restaurants are reasonably priced and we found ourselves eating in a traditional Torinese piola, a tiny osteria serving delicious local wine by the carafe and gorgeous little dishes, like Tomini (soft cheese) and cold cuts. Think tapas - but Torinese style!.

And if you're travelling in the summer and feeling hot, you may want to pop into a Grom ice cream store: from one single shop, this Torinese company that has now expanded to such far corners of the world as New York, Dubai, LA and Paris. In fact, why just have gelato in summer? 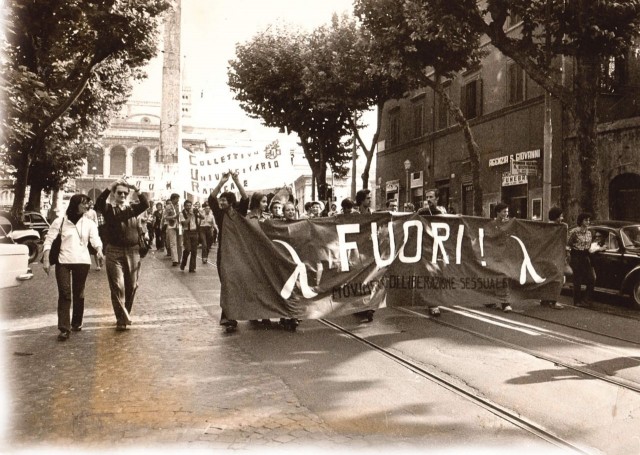 Turin's LGBT scene may be relatively small, but don't be put off by that. There are very popular long-running events, such as the Bananamia, which is held at the Centralino Club every Friday. Another regular, for the past 16 years is Les Folies Scandal, which is held in various clubs on Saturdays. There is also a number of very well established gay venues, including two saunas.  Check out the Gaytway Guide to Turin for more details.

It's fair to say that Turin is very LGBT-friendly and it's rare that one is made to feel unwelcome across the City, but especially in the very trendy area of San Salvario, where the choice of restaurants, bars and music venues is simply amazing, particularly at weekends. Recently the city has a new local administration that has put LGBT rights top of the city's agenda, which is encouraging in a country often so influenced by religion. That Turin is at the forefront when it comes to LGBT rights is not new to many gay Italians: it was here that in 1971 the Fuori! LGBT action group was founded, the first in the country.

Today the city continues to organise a successful and well attended Gay Pride in mid-June, but it also features a very important cultural event, the Turin Lesbian & Gay Film Festival, which is now in its 32nd year and is one of the most important of its kind in the world.

Turin has an international airport (Caselle) that serves many European cities, but it's also very easy to get to thanks to the high-speed Frecciarossa and Italo trains. We travelled on the former from Rome and it was a breeze to get to the very centre of the city in just about 4 hours. Milan and its two airports (150 Km away) is only 45 minutes away by fast train.