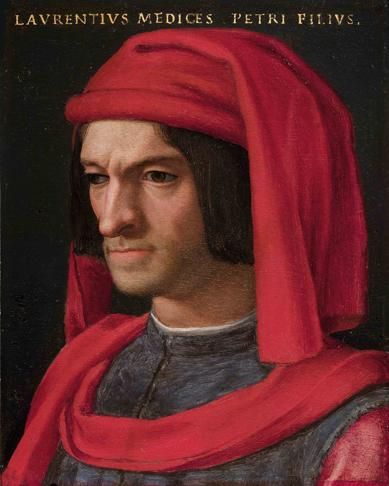 Florence's opulence and splendour during the Renaissance gave its inhabitants a relatively relaxed and comfortable lifestyle. Artists from all over Italy and beyond came to work in the city, trade and commerce prospered, writers and poets established themselves here. What many people don't know is that Florence at the time was also pretty relaxed around the issue of the homosexuality of its citizens, at least for those days!

And this was not just common knowledge in Florence itself, but well beyond its walls: the Germans called 'florenzer' (Florentine) anyone who indulged in homosexual behaviours and the French called sodomy 'le vice florentin'. The Genoese even had a law preventing teachers from Florence to work in the Ligurian republic for fear that they might be sodomites and therefore prey on their young students. Not that sodomy was legal in Florence at the time: in fact there were laws punishing anyone indulging in it, but more often than not justice was pretty lenient and punishments were mostly fines, frequently condoned or reduced - and often never paid at all. This at a time when elsewhere in Italy and beyond the main punishment for sodomy was death (often by burning at the stake). 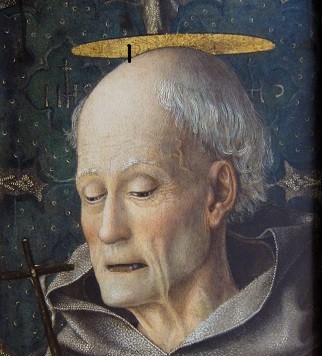 The reasons for this benign acceptance of homosexuality is to be found in the very spirit of the Renaissance, a movement that found in Florence its centre because of the ruling Medici family - especially Cosimo (1434-1464), Piero I (1464-1469) and in particular Lorenzo, known as The Magnificent (1469-1492) - all of whom were lovers of the arts, of classical beauty and firm believers in the centrality of the human knowledge.

But of course the Church was in the forefront of the repression of what they called 'the innominable sin'. A very famous preacher of the time, Bernardino da Siena used to admonish the locals in 1427 that it was a lot riskier for young males than for young ladies to walk around the city at night, due to the large numbers of homosexual men on the prowl. The same Bernardino as well as many other 'defenders of the moral order' believed that the disastrous floods of 1333, plus the frequent epidemics of plague (also known as the 'Black Death') were all a divine punishment for the city's failure to tackle the issue and called for all the sodomites to be burnt at the stake. Despite being such a hateful and divisive character, after his death Bernardino was promptly made saint, in 1450.

The call for stringent rules against sodomy caused the institution of the 'Night Officers' in 1432 - what we'd call today a 'vice squad'. Among the most famous victims of the guards were Leonardo da Vinci, the painter Botticelli and sculptor and goldsmith Benvenuto Cellini. But again, penalties for the many convicted (17,000 reported cases of sodomy in 70 years) were comparatively benign, especially for those in the know. The 'gay mafia' operated even in those days! Or more realistically the Medici family knew pretty well that in order to keep the artists flowing in and the city's international reputation shining they had to close one eye to the sexual inclinations of their citizens, especially those with an artistic inclination. Besides, the Medici themselves weren't completely above board themselves: it is rumoured that a few of them were gay. 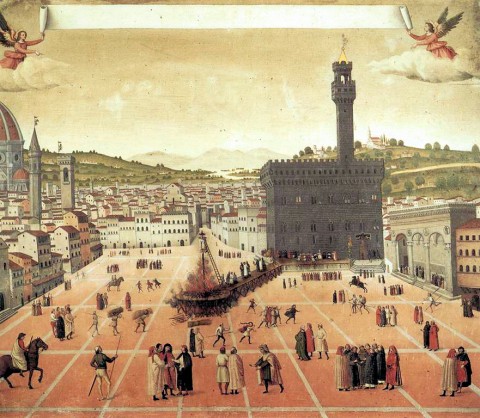 ​Of course Bernardino da Siena was not the last hateful and revengeful Christians pervaded by the holy fire of moralisation. In 1494 Girolamo Savonarola, a Dominican friar and preacher started his 'purification and cleansing campaign' in Florence against the Medici ruling family and the Tuscan city's loose morals. Unsurprisingly, eliminating sodomy was top of the to-do list. When the French King Charles VIII invaded Italy, Savonarola incited the city to rebel and kick the Medici out, establishing a new republic. But then he went a step too far, refusing to accept the Pope's rule and continuing to preach his extreme views (and keeping the 'purifying bonfires' alight on which hundreds of 'sinners' perished). The Pope, also conscious of the potential spread of the dangerous religious fervour of Savonarola, promptly proceeded to excommunicate him. But it did not take long for the Florentines as well to get tired of the mystical preacher: in May 1498 they hanged and burned him and two of his close followers. It is said that the fire under the pyre was actually started by a sodomite. Oh, the irony!

After the end of Savonarola's period a relative calm and tolerance returned to Florence. However on the morning of 13 August 1512 a group of thirty aristocratic men who called themselves 'Compagnacci' (literally 'the bad guys') broke into the government palace to ask that the authorities pardoned the sodomites who had been exiled or had lost their jobs because of their convictions. Can we perhaps call this a pre-Stonewall moment? A few weeks later the Medici family, supported by the Spaniards were re-installed in Florence. The Medici duly accepted the Compagnacci's requests and it was back to business as usual.

WHAT IS LEFT TODAY

Walking around Florence there are plenty of reminders of how the city was a relatively tolerant harbour for gays in the Renaissance. Just pop into the Uffizi or the Accademia and there you will find countless statues with a clear homoerotic undertone and paintings with plenty of naked male flesh on display. It is undeniable that gay artists did put 'passion' in their work, as much as they were possibly allowed to get away with. But who were the gays in Renaissance Florence? Where would they meet and how did they live? 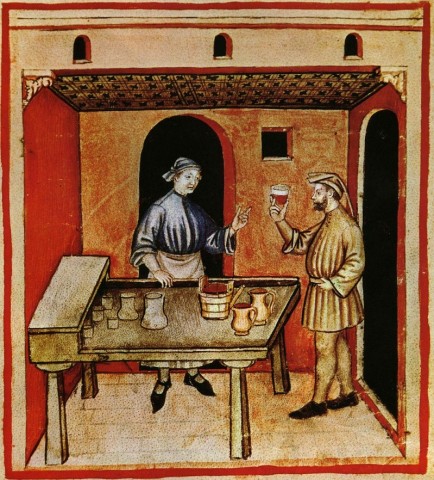 Who said that gay bars are a modern invention? In the small alleyway of Chiasso del Buco, a stone's throw from the Ponte Vecchio there used to be a small taverna, which was a known meeting place for homosexuals in the 1400s. In fact so famous that its colourful clientele was mentioned in satyrical poems of the time and even by Florentine ruler Lorenzo de'Medici. The tale of Brunetto Latini

Who was Brunetto Latini? Well, he was a writer, poet and also Dante Alighieri's teacher. But he was also known for having a predilection for guys and because of that Dante himself decided to feature his former mentor in his masterpiece The Divine Comedy - obviously in eternal damnation. Still the admiration for Brunetto is enough to make Dante pretty sorry for his unlucky fate. His tomb was lost for many centuries but was then rediscovered in the Santa Maria Maggiore church and is today marked by a small column. 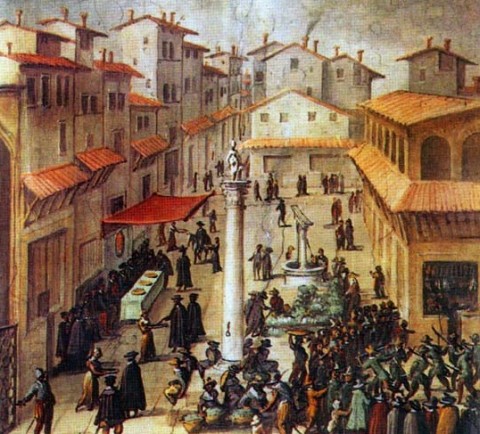 As we saw earlier there were some taverns where people could meet, but in Renaissance Florence there were also areas where the locals would go to find the company of men – early cruising areas? One such area was the neighbourhood around Sant'Ambrogio church and we know about this from Machiavelli: the famous writer, philosopher and politician mentions this in a pretty explicit letter about a friend, Giuliano Brancacci, detailing his night-time escapades in search for ' uccelli ' (birds, in Italian still to this day a metaphor for dicks). 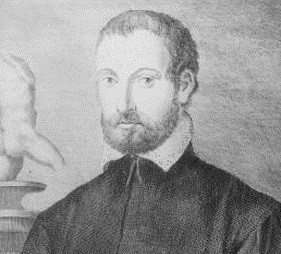 Benvenuto Cellini – A man of many talents (and tastes)

Multi-talented sculptor, goldsmith and painter Cellini was what we would call a 'pansexual' these days – he liked both guys and girls and he was a pretty 'active' sort of guy: in other words, he kept pretty busy with his apprentices and models (of both sexes). He ended up being accused or charged of sodomy several times, once with a woman and at least three times with men. These were not the only times he had trouble with justice – from affray to murder: he was a pretty fiery man! But being a favourite with the authorities helped: his punishments were on the light side. He was buried with great pomp in the Santissima Annunziata Church upon his death in 1571. 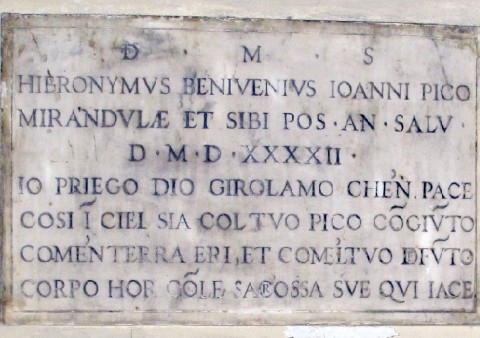 A few minutes walk north from the Duomo and close to the Giardino de' Semplici, the Museum of San Marco used to be a convent. Here in 1933 the tomb of famous philosopher Pico della Mirandola was found, next to those of another man, humanist Girolamo Beniveni. Pico died in 1494 aged only 31 and his lover Girolamo died almost 50 years later, aged 89. And despite such a long time had passed in between, Girolamo wanted to be buried with Pico. That in itself tells a lot about the intense love bond between the two, The epitaph (above image) tells us about their affection without too much subterfuge. And to confirm the matter is friar Savonarola himself who knew and was a friend of Pico: upon his death he remarked that 'Pico couldn't have gone straight to heaven but was destined to spend some time in Purgatory cleansing for his sins... '