The recent terrorist attacks in Brussels, plus the previous alerts that have put the city in lockdown in November 2015 have had a massive impact on the Belgian capital and its tourism industry. And it's all very sad, because Brussels is a beautiful city, set in an extremely LGBT-friendly country. And it's time to go back to Belgium, support this city and show defiance against those who would destroy our democracy and freedom.

A lot of people say that Brussels is the capital of boredom, probably because they associate it with EU bureaucracy. Any yes, perhaps it hasn't got the size or the charme of the French Capital, nor its glorious history - but then again very few cities can compare with the cultural relevance, the innumerable layers of history and intense fascination provided by Paris.

Not being too famous has its advantages, though. In Paris or London one sometimes feels like visiting a theme park, for the sheer mass of tourists all after a quick bite of those iconic landmarks. Landmarks that actually don't mean very much to the locals after all - think London red phone boxes: we stopped using them decades ago and are kept there just for tourists. In Brussels one only has to leave the very small area around the stunning Grand Place and the not-so-stunning Manneken Pis, with the inevitable ghastly collection of souvenir shops selling pissing fountains and lace curtains, to find a much nicer and interesting city. Just a fifteen minutes walk south of the Grand Place is the area framed by Rue Blaes and Rue de Minimes - the Marolles. Here a stunning collection of vintage furniture stores and retro light fittings shop is a great distraction from the typical sightseeing itinerary and a great place to spend time on a Saturday morning. At weekends a big flea market market is also held in the Place du Jeu de Ball, off Rue Blaes.

Apart from the unmissable Grand Place, which of course must feature on every itinerary, Brussels offers plenty of charming little spots. The Sablon district is a beautiful high-end residential and commercial area. The main square is framed by the beautiful late Gothic church of Notre-Dame du Sablon, built between 1400 and 1594, and featuring some pretty amazing stained glass windows. 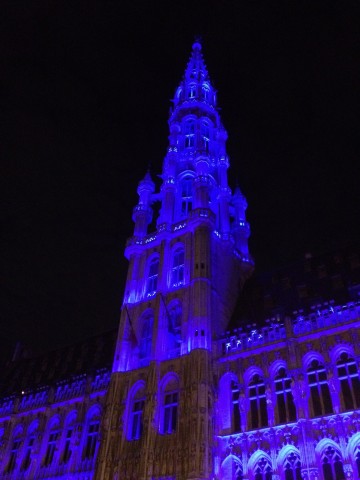 Bathed in Blue - The Town Hall

Also historical and with a special significance in the history of the city is the Cathedral of St. Michael and St. Gudula, which most tourists miss altogether, though it's a mere ten minutes walk from the Grand Place. It was here that in 1047, Lambert II, Count of Leuven founded a chapter and organized the transportation of the relics of Saint Gudula, patron of the Brussels, previously housed in Saint Gaugericus Church on Saint-Géry Island, which was the original first settlement of the city. The church we see today was built in the Gothic style - the choir was constructed between 1226 and 1276 and the façade was completed in the mid-fifteenth century.

Whilst Paris is well renowned for the quality of its food and restaurants, Brussels is rarely classified as a destination where to enjoy fine cuisine. In fact most people probably know Brussels for its mussels and chips (frites). Thankfully the city offers much more, from small bistro-like establishments to typical brasseries. The area around and just north of the Grand Place may be a bit touristy, but a mere ten or fifteen minutes walk away from the small area in question will reveal a stunning array of eating and drinking choices. And one never feels surrounded by tourists, rather than locals....

Don't miss the opportunity to have a walk (or sit for a coffee) in the stylish Galeries Royales Saint-Hubert, a glazed shopping arcade that preceded other famous 19th-century shopping arcades such as the Galleria Vittorio Emanuele II in Milan. 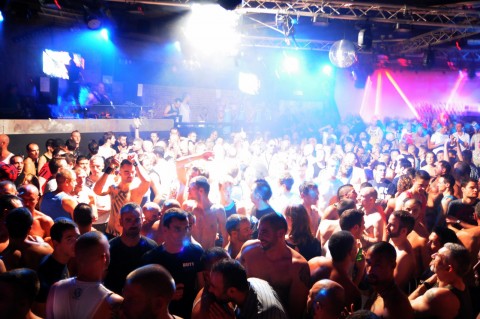 Brussels is a very inclusive and tolerant city for the gay traveller. Few people know that Belgium was the second country in the world to legalise same sex marriage after the Netherlands. It has a more than interesting scene, but the highlights of the gay calendar are the La Demence parties, which are held roughly every month and with two massive multi-night events, one at Easter and another at the beginning of November for its anniversary. La Demence has for almost twenty five years attracted a vast gay male crowd from neighbouring France, Germany, England - as well as Belgium of course, and much further afield. It is quite remarkable to dance with such a diverse multi-national crowd: it's a sort of mini EU on a dancefloor, possibly quite unique in its kind. And it's still going strong: the highlight is their anniversary party, held every year at the end of October (28-31 October 2016), but there are regular parties every month, plus some big ones also over the Easter weekend and New Year's Eve, Apart from some of the anniversary's events, normally La Demence parties are held at The Fuse club on Rue Blaes, in the Marolles.

So to sum it up, Brussels is a city to enjoy like a local and with far fewer tourists than Paris that is entirely possible and indeed a real pleasure. It is a compact city that does not reveal itself immediately, but that needs to be discovered through exploration and time. Certainly it deserves more than a quick visit and with excellent connections with London, Paris, Amsterdam and most of West-Central Germany there is really no excuse not to see and appreciate this often misunderstood and maligned city.

For a full LGBT guide to Brussels, click HERE