London is without doubt one of the most accepting and tolerant cities for LGBT people today, though it's often easy to forget how the massive change in social attitudes and policies has only happened in the last fifty or so years. Before that, it was a pretty different world - a much more hostile one. In a previous post I examined Oscar Wilde's London: he was perhaps the first and most known person who somehow lived his homosexuality in a different way, though bearing no resemblance to what we would call 'gay lifestyle' today. Wilde himself was married and most of the activities he was then convicted for happened more or less behind closed doors.

And yet his life involved visits to men-only brothels, parties and other places where illicit practices could be entertained. That is because there was an underground gay network in London, even well before Wilde's times. It's perhaps easy to think that before it became more socially acceptable to be gay, LGBT people would just get into an ordinary marriage and play the straight role all the time. But that would actually be wrong: we know from historic records that London was in the past a thriving hub of homosexual activity, pretty much like it is now - but just in a different way.

What is true is that most gay men and women would get married; that was pretty much the absolute rule. Not getting married (and thus not procreate) was simply not a socially acceptable option. However that did not mean that sexual practices would have been confined to the conjugal bedroom with the lawful, opposite sex partner. London was in the 1600-1800s a very busy city, pretty much like now. It was also a very dirty, dark, overpopulated and dingy city, mostly in places we wouldn't suspect today, such as the City itself. In fact many areas of London, with their narrow labyrinthine streets and dark corners were the perfect set up for illicit businesses trading sex and for other unlawful encounters.

There were several options available to men looking for same-sex meets, such as the so called Molly Houses. A Molly House in the 18th or 19th century was a tavern, pub or even a coffee house that allowed gay men to socialise. They weren't brothels in the proper sense, though there were male prostitutes operating there and some of these houses had rooms that could be hired by the customers. Most of them were places where gay people would meet, dance and sometime dress up. All of these activities were of course also prohibited, so they pretty much operated undercover and the knowledge of their existence was due to word of mouth. 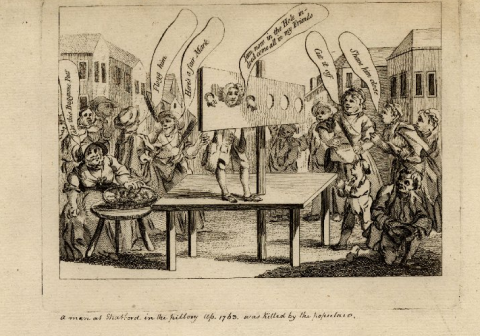 Pillorying was a common punishment for convicted sodomites

​The House of Mother Clap , Field Lane - The Scandal of the Century

On a cold Sunday in February 1726 a squadron of Police constables raided the premises of a coffee shop in Field Lane, Holborn. Today this location is probably where the Holborn Viaduct is, if you fancy finding the exact spot where this place of illicit activities once stood. The owner, a lady commonly known as Mother Clap, was arrested, together with some customers. Margaret Clap (her full name) ran one of the busiest and most successful molly houses in London, one that was big enough to accommodate dancing and fiddling. She also had a room at the back which was called 'The Marrying Room' or 'The Chapel', where people could go for some intimacy. The demise of Mother Clap's house was brought forward by The Society for the Reformation of Manners, whose members managed to gather information by posing as customers, assisted by other customers who had turned informers - probably to avoid being themselves outed and reported to the police. By August that year, three of the arrested men had been hanged, two men and a woman pilloried, fined and imprisoned, plus a few more had gone 'missing'.

In 2001 a play was written about Mother Clap's Molly House.

However the reason why the raid of Mother Clap's disorderly house is so important is that it caused a massive public outrage in London at the time. So much that The London Journal in its May 7th, 1726 edition expressed appropriate horror and proceeded to duly expose all the 'Nocturnal Assemblies of great Numbers of the like vile Persons at what they call the Markets, where they make their Bargains, and then withdraw into some dark Corners to indorse, as they call it, but in plain English to commit Sodomy'. Through this document we were allowed a rare view of what gay London looked like at the time.

So, what were the five cruising areas of London, circa 1726, as exposed by The London Journal? 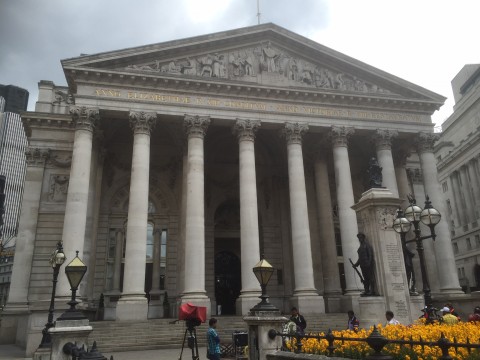 It is difficult to think that this area, today one of the busiest in the City was a hub for gay encounters in the past. If we stroll inside we see luxury shops, restaurants and a constant flow of suited businessmen. But if you had been here at the Royal Exchange (the building we see now it's not where the action took place, as that burnt down in a fire in 1838) three hundred years ago you would have seen the hustle and bustle of traders, hawkers, fruit sellers, all moving around stalls where you could buy food and drink coffee. The pillars of the arcades would have been plastered with advertisements and a few guys would have been looking for casual work. No surprise the place attracted lovers of 'the rough trade' - and of course our 'friends' of The Society for the Reformation of Manners, who would be also going round the arcades trying to find any 'abominable activities' going on. We actually know that the Royal Exchange has been a cruising ground since 1700. In that year 'The London Spy' by Ned Ward reported that "We then proceeded and went on to the Change, turn'd to the Right, and Jostled in amongst a parcel of Swarthy Buggerantoes, Preternatural Fornicators, as my Friend call'd them, who would Ogle a Handsome Young Man with as much Lust, as a True-bred English Whoremaster would gaze upon a Beautiful Virgin". Again, standing in a weary city lawn in the middle of Finsbury Square and above an underground car park it is hard to imagine this area, today busy with incessant traffic, shops and offices as an open space. However back in the 1700s this whole area north of the City had not been built up yet and was actually the last undeveloped parcel within inner London - and not by chance: it was an unattractive swamp where nobody really wanted to move to or build on. While initially it would have been open countryside, by the mid-1600s the area was known for a few filthy run down cottages, enclosures and a rather unsavory resident population, probably because they could not live anywhere else in town, even if they wanted to move. It didn't take long for the area to turn into a red-light district, as even Samuel Pepys mentions in his diary in 1668. In the overall squalor a few molly houses were established, attracting a constant flow of customers. So much so that there was even a path commonly known as 'The Sodomites' Walk'. And if you want to know where this path is - well, it is now the south side of Finsbury Square, with the tiny gardens at the centre being all that remains of the Moorfields today. 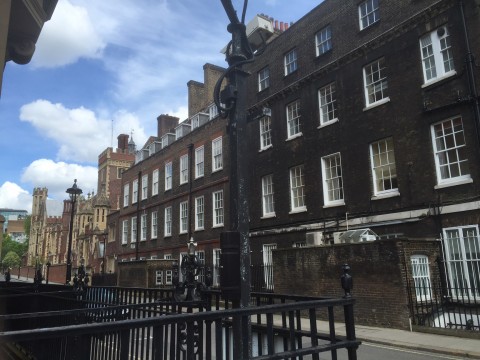 The bogs at Lincoln's Inn

Did you think that cottaging was something relatively modern? Think again. Another place mentioned in the London Journal was the public bog-houses (i.e. conveniences) that served Lincoln's Inn, near Holborn. Lincoln's Inn is still to this day one of the four Inns of Court in London to which barristers belong and where they are called to the Bar. The facilities in question were built in 1691 on the eastern side of the New Square, which sits to the East of Lincoln's Inn Fields and consisted of a long narrow building containing six privies, three on each side, facing each other, which surely facilitated 'conversations'. The bogs have long been dismantled and there is no sign of them today, though until the 1890s the area was still called 'The Bogs', even if the unsuspecting locals didn't quite know why. The only sign of the existence of the facilities is a stone plaque high up on the wall bearing the date 1693, which has the notice: "This wall is built upon the ground of Lincolnes Inn, no windows are to be broken out without leave." This meant that windows could not be opened into the wall overlooking the bog houses, as the stench would rise into the chambers. We can probably assume that a few young law students would have frequented these facilities between one court case and the other, though it is known that the nearby Lincoln's Inn Fields was also a cruising ground and right through the 1760s men regularly picked up one another on the Strand and then came here to use the bog house for more privacy. 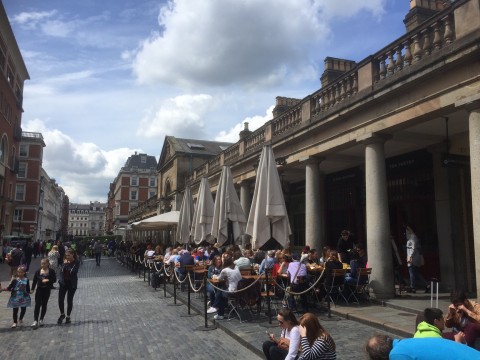 Another area that is changed beyond recognition, Covent Garden has been a market for many centuries, in fact till the 1970s, when the fruit & veg trade moved to Nine Elms, Vauxhall. The area today is one of London's premier shopping and eating destinations, as well as being the heart of London's 'Theatreland'. But the history of Covent Garden is a lot more colourful: originally designed by Inigo Jones in 1630 as a upmarket piazza, with a church and fine houses and terraces, the opening of the market in the late 1600s caused the wealthy locals to move out. And as they moved out, the area and the growing fruit market became also a huge magnet for (straight) prostitution, especially along Drury Lane where every night theatre-goers could find some entertainment of a different kind after the shows. Descriptions of the prostitutes, like the famous Betty Careless, and where to find them were provided by Harris's List of Covent Garden Ladies, the "Essential guide and accessory for any serious gentleman of pleasure", published (and regularly confiscated) every Christmas from 1760 to 1793. But it wasn't just straight sex on offer here. There was a lot of bent sex too. In fact so much that the Ladies of the night were at one point on the front line in asking the authorities to do something about the spread of 'vice', as their trade started to be affected and dwindled to a trickle.

Along the South side of the park, today as in the 1700s stand numerous military barracks, serving the Royal Palaces and the other government buildings nearby. And where there are soldiers there are also plenty of opportunities for sexual encounters. In High & Low Life (1781), writer George Parker deplored the men "who signal to each other in St James' Park, and then retire to satisfy a passion too horrible for description". The authorities tried to do something, including instituting patrols going around the bushes at night and even considering locking the park at night, in 1791. Apart from the obvious risks involved in cruising in the park, i.e. being sentenced to be pilloried and/or locked up in jail, often being brought to face justice by the indefatigable members for The Society for Reformation of Manners, soldiers had another thing to worry about: blackmail. The park was rife with hustlers and blackmailers such as a certain John Mitchell, who not only bragged that his penis was nine inches long but also: "When I wanted Money, I took a Walk in the Park, and got 4 or 5 Guineas a-Night from Gentlemen, because they would not be expos'd.".