Trastevere is one of the most picturesque districts of Rome, with its cobbled streets, colourful red and ochre buildings and thriving bohemian nightlife. At the same time, being on the left bank of the Tiber, it has always had its own very distinctive character, which it still maintains today. It is one of those neighbourhood where you can still feel the heart of old Rome, its warmth and its uniqueness, steeped in centuries of history.

A bit of history

Its name derives from the Latin Trans Tiberim, which means 'across the Tiber'. During the early Roman period the area was mostly inhabited by fishermen and afterwards by many Jews and Syrians. The Emperor Augustus (27 BC – 14 AD) made the area officially part of the city and he even built his own Naumachiae (a man-made lake for mock naval battles) in this area.

This was also a very important area in the early Christian period and the Basilica of Santa Maria in Trastevere is a beautiful testimony of the art of that period. During the middle ages the area remained inhabited and the narrow alleys we see today date back to that period, though the paving of the roads with cobblestones did not start until the early 1500s.

The area has always been very prone to flooding from the nearby river, so in 1870 it was decided to demolish all the houses and buildings that used to exist along the Tiber and replace them with the tall embankment we see today.

If you visit in mid-July don't miss the Festa de'Noantri (literally Our Celebration). In the evening of the first Saturday after July 16th a bejeweled statue of the Virgin Mary is paraded around the lit up neighbourhood and reach the church of Santa Agatha. After the procession everyone gets into the fun with a lot of eating and drinking, the Roman way!

Trastevere should be visited twice, once during the day and once at night, because it's an area so full of culture and vibe during the day as much as it is during the nights. Below are a few things that should definitely be on your to-do list.

What to see in Trastevere 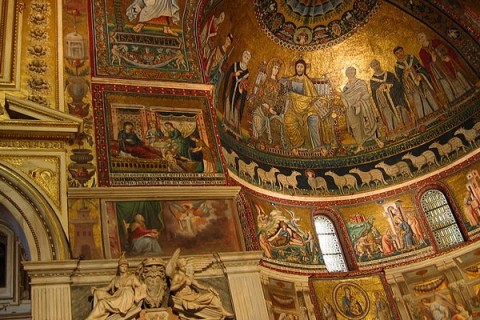 This church is one of the oldest in Rome and was built on the site of a supposed miracle (the gushing of oil from the ground). The original church dates back to 340 AD and it is impossible not to marvel at the beautiful golden mosaics dating from the late 13th century. Also worth noting that the majestic granite columns holding the main nave have been taken from the Baths of Caracalla, as in the medieval period it was common to use the old Roman monuments as a source of building materials. In front of the church is a beautiful fountain dating back to 1682, which is a traditional meeting place for the locals. Another church rich of history – here it's like journeying back in time: parts of the building date back to the 12th century, some to the 17th. The columns were, like in Santa Maria, picked from Roman buildings. But there is also an intriguing underground exploration possible as behind the sacristy is a staircase leading to the basement where the remains of the original church, dating to 499 AD were found in 1907, together with some Roman houses. Romans are very fond of the Fontanone, a large fountain with cascading water situated on the slopes of the Janiculum hill. It was built to celebrate the restoration of a Roman aqueduct by Pope Paulus V in 1612 and was also the inspiration for the Trevi Fountain. Getting to the Fontanone allows a beautiful stroll that I recommend to take at dusk as the view from here towards the city in the golden light of sunset is unparalleled. Little movie curiosity: the Fontanone was the backdrop of a car chase in 007's Spectre Movie. This beautiful old bridge over the Tiber was built in 1479 but it actually rests on the foundations of a Roman bridge called Pons Aurelius which had been destroyed by Longobard King Desiderius in 772 AD. The big round opening in the middle of the central span (the oculus) was designed to relief pressure in case of floods – it's a good reminder of how furious the usually calm and sleepy Tiber can become from time to time. Before the tall embankments were built the locals also used the oculus to determine the severity of a flood – as soon as the water started to go through the hole people knew that it was time to run away!. Just across from the Ponte Sisto, this small piazza is named after one of the most famous and loved Roman poets, Carlo Alberto Salustri (1871-1950), better known with the pseudonym of Trilussa. His very irreverent and anti-clerical sonnets are all written in the Roman dialect. The steps leading to the Aqua Paola fountain (another celebration of the Roman aqueduct brought back to life by Pope Paulus V) are always busy every evening, especially in the summer months with locals and tourists talking, drinking, playing the guitar and having a good time. The small island located in the middle of the Tiber is said to be the reason for the birth of Rome: a trading post between the Latins (who lived on the right bank) and the Etruscans (who lived on the other side). The island allowed an easier crossing between the two sides in those early days. Near the island you can still spot the dramatic ruins of the old Roman Bridge (Pons Aemilius) which stood here from 180 BC until 1557 when it was destroyed by another massive river flood. In Roman times there used to be a temple to Asklepius on the island – a legend says that the spot itself was chosen by a holy snake (Asklepius' symbol) brought to Rome from Epidavros, in Greece in 291 BC. Today the spot where the temple used to be is taken by Saint Bartholomew's Church, built by German Emperor Otto III around AD 1000. Shunned by most tourists, Villa Farnesina, is considered one of the noblest and most harmonious creations of Italian Renaissance. It was commissioned at the beginning of the 16th century by the Sienese wealthy banker Agostino Chigi and it contains some stunning frescoes by Rapahel and others, including Giovanni Bazzi whose nickname was 'The Sodom'. No prizes for guessing why. Information on opening times can be found here. It is remarkable how this corner of Rome is almost unknown even to the locals. Situated on the slopes of the Janiculum hills it is home to over 3,000 species and dates back to the 16th century, making it one of the oldest in Europe, though there has been a Papal garden on this spot since the 1400s. It's a beautiful oasis of peace and quiet in the unruly and often chaotic traffic of the he Capital. The view of the city from the upper reaches of the park, which sees trees dating back over 300 years is just breath-taking and you'll be amazed that such space does not yet see more tourists. Information on opening times can be found here.

What to do in Trastevere When the heat becomes unbearable, Romans head to the very few remaining kiosks selling grattachecca, which is basically shaved ice (from a large block) flavoured with fruit syrup. It's a uniquely Roman way to fight the summer heat and a great experience to mix with the locals. In Trastevere, visit the Sora Mirella stall, ('Sora' is the Roman equivalent of 'Mrs') which is near the Ponte Cestio, leading to the Tiberina Island. The Sora Mirella herself died recently in 2013 but the kiosk is still open and after over 100 years of trading! 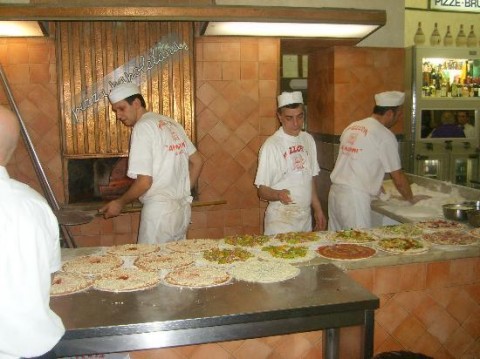 Pizza from 'The Morgue'

No, not a real morgue, but the Pizzeria ai Marmi (Viale Trastevere 53) is famous for its signature marble tables (in Italian marmi) and so it is affectionately called l'obitorio – the morgue. The pizzas are made the Roman way – that is very thin, flat, crunchy and less doughy compared to the Neapolitan ones. Don't leave Rome without having tried the baccalá (salty cod) fritters and the supplí (deep fried rice balls) – some of the most popular local dishes. 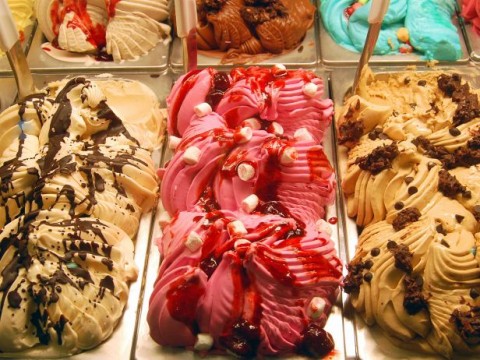 It's probably true that every neighbourhood in Rome features an outstanding gelateria – and here in Trastevere it must be this one, the Gelateria La Scala (Piazza della Scala). It's a microscopic shop where you could probably just about fit five people – but they do manage to fit an incredible selection of ice cream flavours, all made with entirely natural ingredients. Yum! Just south of Trastevere lies the famous Sunday morning market of Porta Portese, which is the biggest flea market in Rome. Started in 1945, it has changed a lot in the last few decades, with many of the stalls now managed by foreign immigrants rather than locals, making it a very multi-ethnic place, but perhaps losing a bit of the original Roman charm. You can find a bit of everything here, from antiques to clothes, but do beware of pickpockets who seem to thrive in such a crowded space.

The Market of San Cosimato

Romans love their fresh produce and the place to visit here is the San Cosimato market, which is held every day except Sundays in the square that bears the same name. Here you can wander through stalls selling the most beautiful and colourful fruit and vegetables, fresh fish and seafood and meat. Mix with the locals doing their shopping and listen to the traditional market cries. Tucked away on a side street (Vicolo di Santa Margherita, 1) it would be easy to miss this small but lovely and cosy gay bar, located in an old stable, with exposed brick walls, candles, wrought iron chairs and drapes, reminiscent of a madame's boudoir. It's a great place to have a drink after dinner before going dancing - or for those looking for an intimate evening. Information and events can be found here.