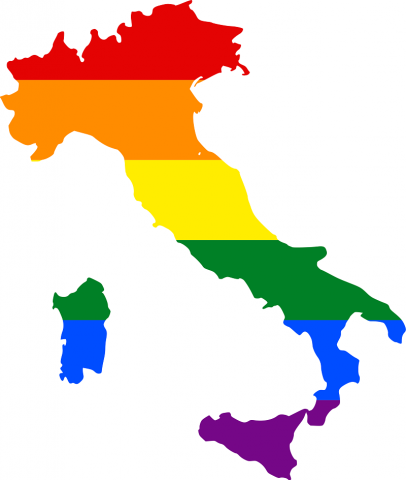 ​With almost 50 million visitors every year, Italy ranks fifth among the most visited countries in the world. Its endless bounty of artistic treasures, romantic landscapes, literary and musical icons and world-renowned food makes it a destination without equals. Of those visitors, many are LGBT. What sort of welcome do they expect to receive in Italy?

Legislatively, Italy can be considered quite backward compared to the rest of Western Europe. Unlike other EU countries, Italy still does not recognise same sex marriage and only recently (May 2016) and after an excruciating political debate the law has been amended to allow 'civil unions', which have been explicitly worded to differ from traditional opposite-sex marriage - though from a juridical point of view they confer similar rights, including the recognitions of those unions celebrated abroad. One key issue that differentiate the civil unions from marriage is the exclusion of the obligation to 'faithfulness' between the parts, something that a few activists have called discriminating. Also the part of the legislation that provided for limited adoptions has been shelved, after opposition from within the government side. And yet, with all its limitations, the new law is a huge step forward for the local LGBT community, giving at least some sort of recognition to same sex couples. As it often happen in Italy, the legislation is a framework and successively the courts interpret and expand the provisions to encompass new situations.

It goes without saying that one of the main responsibilities for the delay and the constant obstructions to social progress on equality matters is to be found in the strength of the Catholic Church in a country whose political institutions command very little respect among the ordinary people. In that respect the intrusions of the Catholic Church in secular politics displayed in Italy would be considered a serious violation of the sovereignty of the State anywhere else. Nowhere it would be allowed for a Bishop to, for instance, influence a vote in Parliament with a public speech or a letter to the press, though in Italy this is pretty much the norm.

And yet - to a large extent - Italy is not unfriendly to LGBT visitors, but it's worth remembering how just a few decades ago, the country was a key destination for gay visitors, especially men who could enjoy levels of freedom unequaled in their home countries. This may seem at odds with the deep Catholic influences we mentioned above, but the dichotomy is only apparent. Whilst homosexual acts are prohibited by the Church, its stance used to be much more nuanced than today, possibly also because the Catholic hierarchy was acutely aware that its ranks had been a traditional haven for homosexuals for many centuries.

A FORMER HAVEN FOR LGBT PEOPLE

During the Renaissance some parts of Italy, like Florence for instance, were particularly lenient towards homosexual behaviours, which is possibly one of the principal reasons why the Tuscan city became so central and important from an artistic and literary point of view in the 1400s and 1500s. The relative open-mindedness of Florence remained established well beyond the Renaissance. You can read more about it here.

Moreover, Italy's adoption of a legislative tradition closer to the French Napoleonic Code, which does not criminalise homosexual acts, meant that the newly formed Italy of 1860 did not have a single law mentioning homosexuality in its books. The only provision that could be used to prosecute gay men were general indecency laws, but that effectively meant that as long as people acted discreetly and away from public gaze, nothing could reasonably happen to them. Add the general Italian phobia of 'scandals' and in the end the police would rather close an eye or two and avoid raising too much dust in case some high excellency or noble big wig got caught in the act.

As a consequence of this very 'relaxed' approach, a large number of gay men flocked to Italy, especially its poor South, where scores of young men were more than eager to earn a few Lire by befriending foreigners (read our Taormina post here). Of course all these young men were not necessarily gay, in fact probably the vast majority were straight, but they looked at the foreigners' tendencies as some sort of extravagant behaviour and anyway nothing that could not be washed away with a quick stop at the confession box. With the alternative being a life begging for scraps, even the most heterosexual young man could see the advantage of 'playing the gay role'.

Even Mussolini, though keen in following the lead of Hitler, hesitated in approving any legislation condemning homosexuality, because he feared that by mentioning it, the issue would have been legally recognised. He eventually capitulated in 1931 with a law prohibiting acts 'corrupting the morals' and as a results many people were rounded up and sent to the penal colony on the remote Tremiti Island.

After the war things went back to 'normal'. Authorities once again seemed more worried about giving homosexuality unwanted publicity than actually repressing it. Which meant that as long as gays were discreet and possibly keeping their heads down, they were pretty much left alone.

Things started to change in the 1970s. Whilst the UK started changing its legislation towards LGBT people, slowly at first through decriminalisation, the sexual revolution of those years started filtering through, especially in big cities like London. LGBT people began feeling part of a larger community that was no longer happy to be just about tolerated and belittled. Through the 80s, whilst the HIV epidemic raged, public toilet kept being raided by the police, with discriminatory gross indecency laws still on the books, LGBT people got out of the closet, shouted against Thatcher's odious Section 28 and started a true march towards equality. A vocal and active community was born.

And here's where things started to diverge. Nothing similar happened in Italy. In a way there was no law to repeal, unlike in the UK, but the result of this has been that in Italy is really hard to notice (or hear) a LGBT community. So perhaps it's not unfathomable to think that the absence of an explicitly homophobic legislation to rally against was the key differentiator here. In the end the tables switched and Italy just started looking more and more backward, overtaken by other countries where after the repeal of the anti-gay codes, the legislator started to actively produce laws actually advancing the condition of LGBT people, from adoption, to civil unions and finally same sex marriage.

More recently there has been a hardening of attitudes towards LGBT people, heralded by the rise of Silvio Berlusconi's right and other right-wing forces. These movements' agenda is firmly anchored to a over-macho (and somewhat completely anachronistic) idea of society that has a clear grip of the popular imagination at a time when the country faces a dramatic economic and social crisis. The Catholic Church, although not explicitly backing these extremely conservative political forces is not equally distancing itself enough from them - during the recent debate on same sex civil unions they openly sided with the most reactionary forces in trying to stop the law from passing through.

As a result of the high degree of polarisation on these issues, attacks towards LGBT people have risen, though not in a way that may imply that visitors will experience them whilst in the country, especially when using the standard common sense. The new Prime Minister, Matteo Renzi, heading the left-wing Democratic Party has tried to change trajectory but he's in a coalition with conservative forces, so his efforts have been limited. Other political forces have been equivocal about LGBT rights, only offering support when this was instrumental to other gains, not because of merit and justice.

However overall Italy is still a LGBT-friendly destination, especially in major cities - but maybe not as openly so as others. Visitors should exercise some discretion especially outside the main cities and touristic locations. Hotels will normally not have an issue when a lesbian or gay couple want a double bed (letto matrimoniale), but often they will have to explicitly ask for it.

The LGBT scene is somewhat limited compared to the likes of Spain and the whereabouts of many bars or clubs may not as obvious as in other European cities. Their location often require some research and many of them are listed as 'clubs', which means that there is a joining fee to get in. However there are hardly any venues in provincial cities, especially in the South of the country, though occasionally there may be one-off nights in otherwise mainstream venues.