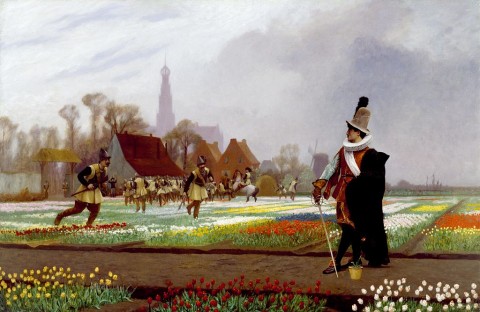 In the imagination of many travellers, The Netherlands are synonymous with tulips. But it's not the usual tourism office marketing gimmick - in Holland tulips are big business and a heritage flower, incredibly dear to the Dutch people. We can see them represented in hundreds of paintings by local masters.

Although the origins of the tulip is to be found in the Ottoman Empire, it is here in the Netherlands where 'tulip mania' blossomed. Between 1634 and 1637 the enthusiasm for the new flower triggered such a speculative frenzy that tulip bulbs were treated as a form of currency. In fact at one point bulbs were exchanged like gold and became so expensive that you could have bought a house in Amsterdam for the same price of a single tulip bulb! And as all speculative frenzies, this one also ended in tears - the bubble burst and the market suddenly collapsed in 1637. The bulbs might not be as expensive today, but tulips still are big business in the Netherlands and over 12,000 hectares of land are dedicated to this flower, with over four billion tulips produced every year. 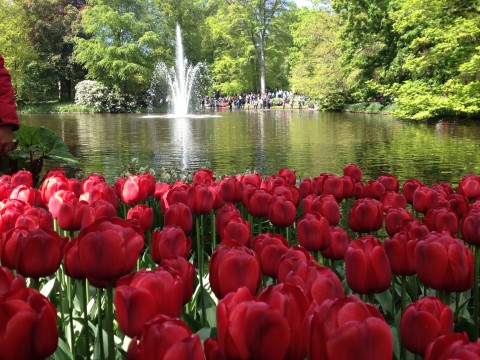 No place is more representative of the pride that Dutch people reserve for the tulip than the Keukenhof gardens, in Lisse. The history of this park goes back to the 15th century, when this area was used to gather herbs for the Countess of Hainaut's Castle (hence the name: Keukenhof means 'kitchen garden'). In the 19th century, the Baron and Baroness Van Pallandt assigned the landscape architect Jan David Zocher and his son Louis Paul Zocher, who had also worked on the famous Vondelpark in Amsterdam, to design the grounds around the castle, mostly in an English landscape style. In 1949 the park was transformed into a permanent exhibition of spring-flowering bulbs and today the gardens are alive with over 7 million bulbs that are carefully planted every year in the autumn and gloriously flower between late March and mid-May. It is a quintessential Dutch experience, with innumerable beds of flowers arranged in all sort of shapes and patterns, with a pretty stream and a picturesque lake to add to the romantic and peaceful atmosphere. If you want to see the park in peak form, generally mid-April is the best time to go, though it depends on the season. There is even a traditional Dutch windmill, which you can visit and from the upper part of which you can enjoy a great view over the gardens and the (private) tulip fields adjacent to the park. It can't be any more Dutch! 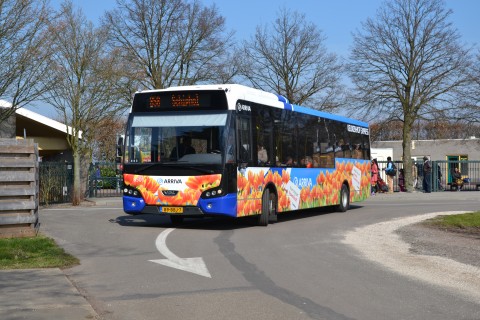 To get to Keukenhof from Amsterdam head to Schiphol Airport and look for the bus to the gardens at the airport's bus station. The journey from the airport to Keukenhof takes about 30-40 minutes. Do purchase your tickets in advance though, as it will save you time, especially at the weekend. And talking of weekends, this is of course when the park is at its busiest - so if you can, go during the week to enjoy the park with noticeably less people

The next appointment with Keukenhof is Saturday 20 March – Sunday 9 May 2021 (Covid permitting). Info at: www.keukenhof.nl