The ever changing face of London is probably one of the most attractive qualities of the British Capital. London is one of those places that never seem to stop morphing, adapting, updating themselves. In many cities this perpetual transformation would be rejected, considered as lack of respect for tradition and history, but not in London. And perhaps this is what has saved the city from sliding into decline, as the British Empire faded and other world cities grew in importance. London has always kept changing and managed to remained relevant – and perhaps this is what will save the city again in this post-Brexit era we're living in.

And so it would be absurd to condemn the redevelopment of the Vauxhall area, which over the last few years has been mutating from an area of warehouses and countless anonymous council flats into a forest of gleaming residential high rises (controversially often snatched by international investors) and fancy upmarket offices, including the futuristic new home of the US Embassy in the UK. It almost feels like someone at an unspecified point in time suddenly realised that the area is actually minutes away from the heart of the city and therefore wonderfully suited for an upmarket makeover. But until that moment, crossing the river seemed a bit like entering another world, a dim sequence of dark alleys and under-the-rail arcades, endless rows of 1960s council flats and hefty grey concrete buildings with tiny windows and no apparent function - I have always wondered whether they had some obscure or secret connotations. When you left the towering spires of the Houses of Parliament behind you and crossed Lambeth or Vauxhall Bridge it did feel very different on the other side of the river.

Indeed it was that feeling of 'crossing a border' that made Vauxhall the hub of gay nightlife in the early 1990s. As you crossed into the neighbourhood from classy and posh Westminster, the sight of the sinister silhouette of the MI6 (the UK Secret Services) fortress building, with its high walls and endless rows of security cameras suitably welcomed you to a dark and shady part of London. The empty spaces and the semi-abandoned warehouses with their affordable rents provided a fertile ground for the establishment of new and alternative gay bars & clubs, which were also attracted by the more relaxed environment (i.e. fewer noise restrictions and more favourable licensing laws) compared to Soho. For almost two decades Vauxhall provided our community with fun and excitement. But with the redevelopment of the area things have changed - rents have increased and many warehouses have been demolished to make space for the new high-rises. Many bars and venues have already been lost, though it would be pretty unfair to just blame the redevelopment of the area for this; undeniably people do socialise differently these days and while twenty or so years ago you had no choice but to go out in order to meet someone new, these days things happen online and it's a bit like ordering a pizza.

And yet, we should not be so quick in discarding our precious history. I know that many people think that we're now at a point that we've become 'mainstream', but are we, really? It does not take a long trip to realise that even in the comfort of our little London bubble, we are – still and sadly – an oppressed minority. And recent happenings like the shooting in Orlando and the reactions to it, demonstrate precisely that.

Many people may not be aware, but Vauxhall has a rich LGBT tradition that goes back in time for many decades, in fact centuries. On the southern side of the railway is a small grassy area and a park. That is all that remains of Vauxhall's Pleasure Gardens, which opened with great fanfare as 'Spring Gardens' in the 1650s and consisted in an attractive extension of trees and shrubs. Re-branded 'Pleasure Gardens' in 1785, they attracted thousands of Londoners every day and in those times you had to get a boat to cross the river, as Vauxhall Bridge had not been built yet. The feeling of 'crossing into a different world' was an essential ingredient even back then; a main attraction of the gardens were the famous 'dark walks', which freely allowed for amorous adventures for all sexual persuasions. In fact scattered among the trees were numerous roofed wooden huts for visitors who wanted to have sex in private: we can guess that pretty much everything happened in there. Who would have said that Vauxhall had darkrooms even in those days!? It is also said that the first official appearance of a gay man at Vauxhall was at the very exclusive Ridotto al Fresco cafe on June 7th, 1732, when a chap called John Cooper, or rather is classy alter-ego Princess Seraphina, turned up dressed in a very smart pink calico gown with a mob-cap and smock, to the bemusement of the other patrons. The gardens closed in 1859, after the railway bridge cut a large portion of the land. By 1870 the area had been covered by housing and only in the 1970s the old Victorian terraces were removed to restore at least part of the park, which is what we see now. 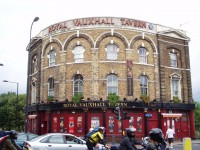 ​Part of that redevelopment included the construction of the Royal Vauxhall Tavern (RVT) in 1863 – originally a dance hall, and possibly for the last few decades one of  the most renowned gay & lesbian venues in London. Certainly the one with the most considerable LGBT history. It's actually difficult to pinpoint when this connection to the gay community starts, but many say that we actually have to go back to the 1940s and 1950s, a time of furtive (and illicit) same-sex relationships. There were very few places where gay people could meet and somehow try creating a community in an otherwise pretty hostile and dangerous world. In those days the RVT had a central bar around the iconic iron pillars serving three areas separated by glass partitions – one of these sections started to be attended by gay men, probably also because the other two sides of the bar were popular with young local 'tradies' and assorted manual workers – no doubt in turn attracted to the RVT because of the unoffcial 'gay 'section'. With a shared toilet serving the three spaces if one were to make someone's acquaintance in the loos and agree to meet ten minutes later at the bus stop down the road, no one would be any the wiser. There were drag shows, though, and the performers would often step onto the circular bar and do their routines from up there, often knocking glasses and bottles as they did so. 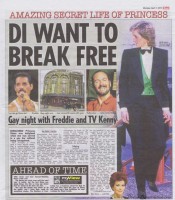 How the tabloids reported Diana's escapade to the RVT

It was in the late 1960s that the drag shows became very popular and at the same time the partitions between the three areas were removed. The central bar also disappeared and moved where it's now (on the right hand side) at some point later. The 80s were a dramatic time for the LGBT people, with the scourge of HIV-AIDS and it was in those very dark days that the RVT became a true focus for the community. Many of London's top drag artists performed regularly, including Lily Savage, the famous drag persona of Liverpudlian comedian Paul O'Grady. And even Diana, Princess of Wales visited the RVT in the late 1980s, disguised as a man and accompanied by Freddie Mercury and comedian Kenny Everett. Apparently the patrons were so focused on Mercury and Everett that they failed to recognise the princess. More recently the RVT featured in the 2014 film Pride and in this year's Absolutely Fabulous movie.

Recently Vauxhall has been in the news again because of the closure of the long-running fetish club The Hoist. Whilst the venue's manager has confirmed that the demise of this stalwart of the London scene is not due to a dwindling business or to any other pressure by the landlords, it is pretty obvious that the departure of yet another gay institution will inevitably have an impact on the character of the area. In fact even the RVT is not entirely safe, despite its wealth of LGBT history; sold to an Austrian development company in late 2014 there is the not-too-subtle suspicion that the owners may want to change the iconic venue into another bland gastro-pub for the benefit of the new upmarket residents of the luxury flats that are sprucing like mushrooms all around. Thankfully the RVT was made a Grade II listed building in September 2015 and so at least the threat receded – at least the threat of demolition, that is. However more recently attempts have been made to positively affirm and protect the use of the RVT as a LGBT space and more information can be found here .

It is heart-breaking that we are losing so much of our community's heritage and history in such a short time. It may be that we socialise differently these days, though having made my coming out a long time ago, when there was no internet and mobile apps seemed pretty much something out of science fiction movies, I still think that personal contact in a bar or club is way better than ordering take-away sex on the sofa. Call me old-fashioned. But whatever the reality of today's cruising, the need for safe spaces to meet and socialise, even in a relatively open and tolerant city like London, is still pretty much there. And not necessarily just because of safety, but especially to celebrate and recognise our culture, our diversity, our right to be what we are – and to pay our respects to those who came before us, those who had to endure a much harsher environment in order to affirm their sexuality. Those who fought for the rights we can enjoy now.

Long live Vauxhall – and the RVT.