April is a great time to be in Amsterdam – the days are getting longer, the weather is (usually) becoming sunnier and the tulips are out in full bloom. But there is an event that really excites the locals more than anything else – King's Day.

The first King's Day was held in 2014, the year after Willem-Alexander became monarch; before and for the previous 123 years it has always been the Queen's Day. The celebrations in honour of the ruling monarch started at the time of Queen Wilhelmina in 1885 on her birthday, the 31st of August. The following Queen's (Juliana) birthday fell on 30th April and so the date of the celebration was duly changed in 1949, the year of her ascension to the throne. However the following monarch, Queen Beatrix, did not change the date when she became queen, in honour of her mother (and possibly also because her birthday is on a mid-wintry 31st January). The current king's birthday is on 27th April and so this is the date the Dutch currently celebrate.

Far from being just a celebration for the monarchy, King's Day is an opportunity for the usually pretty reserved Dutch people to let their hair down and celebrate together with the thousands of tourists who flock in Amsterdam to party for the day. And what a grand party it is! It is estimated that 250,000 people arrive in Amsterdam by train on the day itself!

So, what to expect on King's Day? Amsterdam turns into a sea of orange in honour of the Royal Family, the House of Orange-Nassau. If you want to blend with the locals, you need to dress in the colour from head to toe and in the wackiest possible way. Don't worry if you (unsurprisingly) don't have anything in orange in your wardrobe. You'll find plenty of appropriate clothing available in the stalls that pop up around the city. 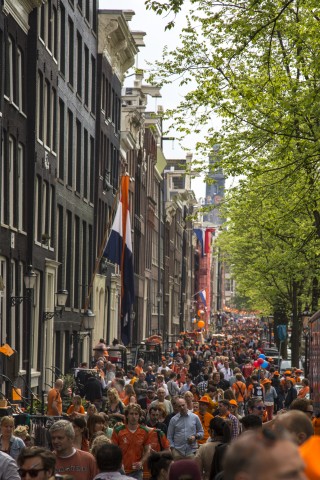 Once you're appropriately dressed in orange you may want to browse the myriad of impromptu flea markets (vrijmarkt) that pop up around the city on the day. In fact everyone seems to trade on the day! You'll find all sort of stuff on display; clothes, antiques, old books, furniture, crockery. And you never know, you may even find some treasures. King's/Queen's Day is the only time in which you are allowed not to pay tax on these trades, hence the tradition's origin. The Dutch also are well renowned for partying hard, so the game starts early on the night before – the King's Night. And it's fair to say that most people keep partying throughout the night and into the next day. Ok, maybe with a quick nap in between… Most gay clubs have special parties on the night, but check the super-popular King's Day edition of Rapido – a must on the Amsterdam scene. 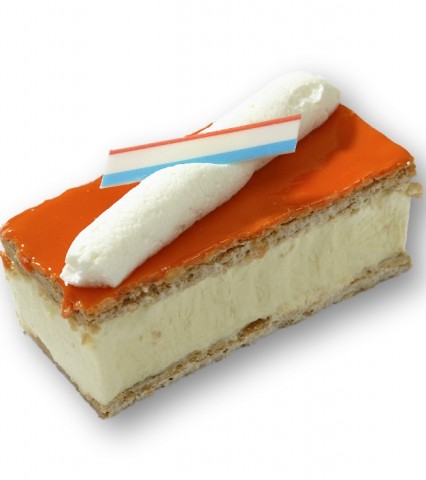 No King's Day is complete without sampling the Tompouce, which is a sweet custard-filled pastry similar to a mille-feuille. Whilst the sweet treat is available all year round, on King's Day the delicious creamy delight is coloured – of course – in orange! By the way, Tom Pouce means 'Tom Cat'. Meaow! Jump on a boat

Like at Pride time and as a sign of how much the canals are important to the locals, the celebrations extends to the city's waterways. Everyone who has a boat will be out there partying and will have invited their friends along. The canals become a massive party zone. Don't worry if you don't know anyone who owns a bot in Amsterdam. People are very friendly and often invite strangers to join them onboard.