San Francisco – In the footsteps of the ‘Tales’

We have the privilege of living in a more accepting world these days. Even though this progress is uneven and incomplete, even in westernised countries we must not lose track of our history and culture – of what led us to the point where we are now. And we need to remind us of that past, in order to properly fight against those who are looking at rolling back our freedoms.

I have always thought that one of the books that really underpin our LGBT+ identity and culture, as well as the community's changing face, is Armistead Maupin's famous 'Tales of the City' saga. As a young man trying to find his true self, reading these books helped me understanding that, after all, we are people – with our own daily problems, dramas, and happiness. We face hardship, but we can be resilient and happy, like everyone. Our sexuality has no impact on our power to be what we want to be.

Maupin's nine books, their publication spanning from 1978 to 2017 – with an 18-year gap between 1989 and 2007, offer an outstanding account of how our community has changed over the last forty years. Through the lens of Maupin's regular characters we recognise our LGBT+ history and the often arduous path we have walked along, from the heady days of Harvey Milk, to the HIV/AIDS epidemic, up to the new 'connected' generation and the relationship between the latter and those who came before them.

Of the nine books, there were three miniseries produced around and closely following the first three books, then in 2019 another series was produced by Netflix, taking inspiration from his last three chapters of the saga.

The background of almost all of Maupin's books is the beautiful and iconic city of San Francisco. Although originally from Washington D.C., Maupin lived in the Bay City for many decades and although he currently lives in England, is one of San Francisco's most renowned adopted sons. Often when reading his books, one almost feels like wandering the streets of the city, which he depicts with unconditional love. In fact, Maupin not just used San Francisco as a distant backdrop for his narrations, he actually set the Tales' saga in hundreds of real city locations.

It goes without saying that San Francisco has changed dramatically since the times in which Maupin set his first three books of the saga (1976 to 1982). However, we can still find many of these landmarks and every Tales of the City fan can visit them and relive the scenes that in the author's imagination took place there. A starting point must obviously be Barbary Lane. The inspiration for the location of Mrs Madrigal's house was given by an area on the southern side of Russian Hill and in particular by a very shady alleyway ending in a set of wooden stairs at its Taylor Street side, called Macondray Lane. Viewers of the TV series will recognise these very stairs as they were faithfully chosen to be the backdrop of the filmed production.

There are some lovely classical homes around here and it is not difficult to imagine the setting of the Tales in one of them – though of course the house we saw in the TV series is a film set.

Cruising (gay and straight) in a supermarket is nothing new, however Maupin is likely to have been the first to make it a part of his Tales. It is here in the Marina Safeway (15 Marina Blvd.) that in the first book of the series Mary Ann Singleton meets Michael (Mouse) Tolliver. 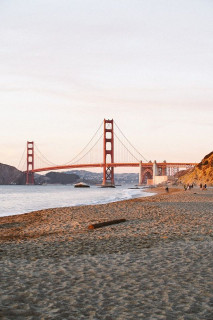 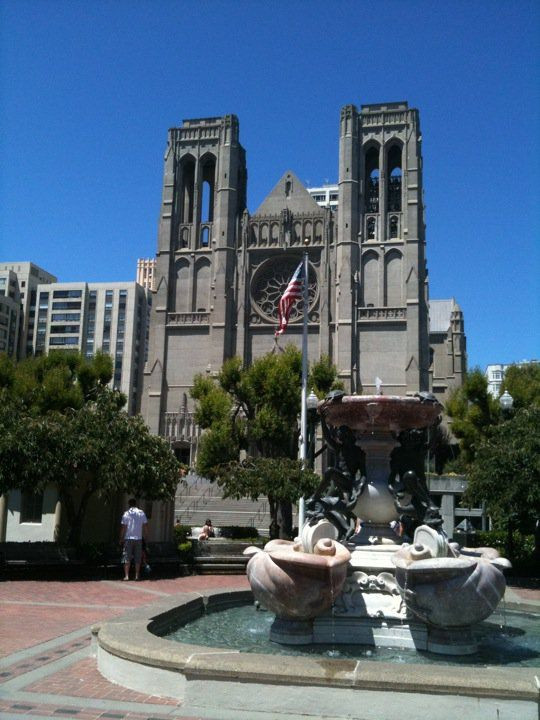 Not so far from the Marina Safeway, on the other side of Fort Mason, we will find another famous tourist attraction, the Ghirardelli Square. It is here that the Tales start, in the Maritime Museum Gardens. From here, Mary Ann Singleton walks to the Buena Vista Café at the corner of Beach and Hyde and right in front of the Cable Car station that she makes a call to her mum in which she tells her that she won't be returning to Cleveland.

Another likely highlight of any San Francisco visit is the neo-Gothic Grace Cathedral (1100 California St). Readers of the second book of the Tales' saga will remember that this is the gruesome background for Burke's initiation to the murderous cult. Just around the corner, at 1000 Mason St. an imposing building, the Brocklebank Apartments is the set of DeDe and Beauchamp's penthouse in the miniseries. Curiously, the same building features also in a classic Hitchcock's movie, Vertigo.

Hitchcock's Vertigo also shares another location with Tales of The City: The Legion of Honor. It is here that Mary Ann meets the evil Norman to confront him and subsequently follows him in the park behind the museum. After an argument, Norman falls into the Ocean from above the cliffs. The views from here towards the Golden Gate Bridge are well worth the hike. Not far from here is Baker Beach, which is a very popular spot with the LGBT+community: Mona and Michael are seen here in the TV miniserie.

Readers of the second book of the Tales' saga will remember the gruesome background for Burke's initiation. Washington Square, in North Beach is another usual sightseeing stop and is the background for Anna and Edgar Halcyon's first meeting, though in the TV series the meeting place is Alamo Square, right in front of the famous 'Painted Ladies'. Today's visitors to San Francisco will probably realise that not a lot of the scene that made it a beacon of LGBT+ culture back in the mid-late 70s has remained. During the 1980s, with the HIV/AIDS epidemic ravaging the city and causing thousands of deaths in the community, many venues – especially those where sex was allowed, like saunas, closed or were forced to cease trading by law.

Of the many such venues mentioned in the Tales, like the Sutro Co-Ed Bath House (18th & Valencia), to the Come Clean Center (2098 Lombard St.) there is just the memory left. Of the bars and clubs mentioned in Tales a few are left and one of the most famous is The Endup (401 6th St.), whose Jockey Short Dance Contests, held here until 1978, were immortalised in the saga.

You can also eat in many restaurants mentioned in the Tales, from Perry's (1944 Union St), where Brian works as a waiter to Sam Wo (813 Washington St), which sees a very bizarre dinner between Mary Ann and Norman. Jean Cocteau: under the sun of the 'Côte d'Azur'
A beach day in Barcelona