Singapore is one of those places often associated with gleaming skyscrapers and a hectic and bustling life, but the Asian metropolis is also famous for being nicknamed the 'Garden City', because of its numerous, lush and manicured parks. It was exactly a decade ago - in 2006, that the local government decided that it was time to embark on a huge construction project, The Gardens By The Bay, with a vision to turn Singapore into a 'City in a Garden'.

The project involved the development of three enormous green spaces on mostly reclaimed land, The Bay Central - which is partially still under construction, The Bay East – whose first phase opened in 2011 and the amazing Bay South Garden, which opened to the public in June 2012.

Over the last four years, the Bay South Garden has attracted well over 20 million visitors and it has become an unmissable stop on any Singapore itinerary. I have personally visited many botanic gardens around the world, but this one is simply stunning – perhaps because its design reflects a modern, interactive and visionary way of dealing with the natural world, the environment (and its conservation), as opposed to older parks that instead focus more on a static display of the flora. The Gardens By The Bay are also amazing because of the spectacular architecture that is on display here. And it's fair to say that no money was spared: over $1b was allocated to this project. 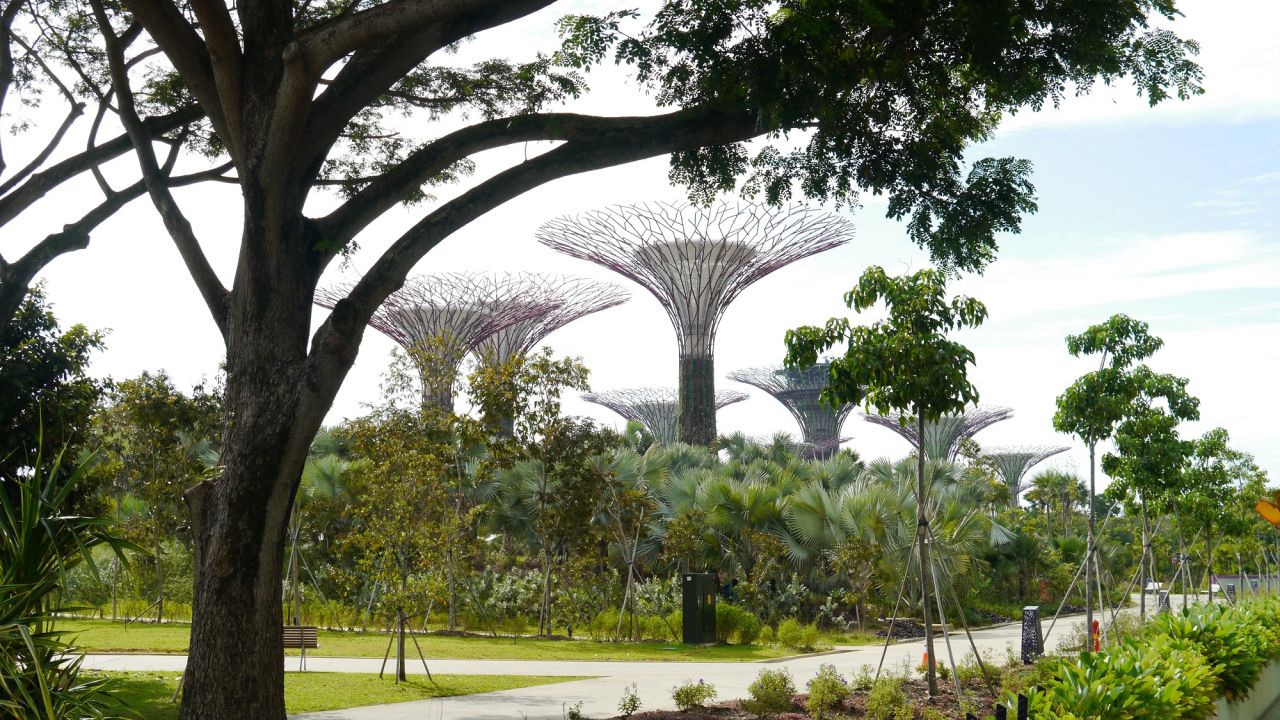 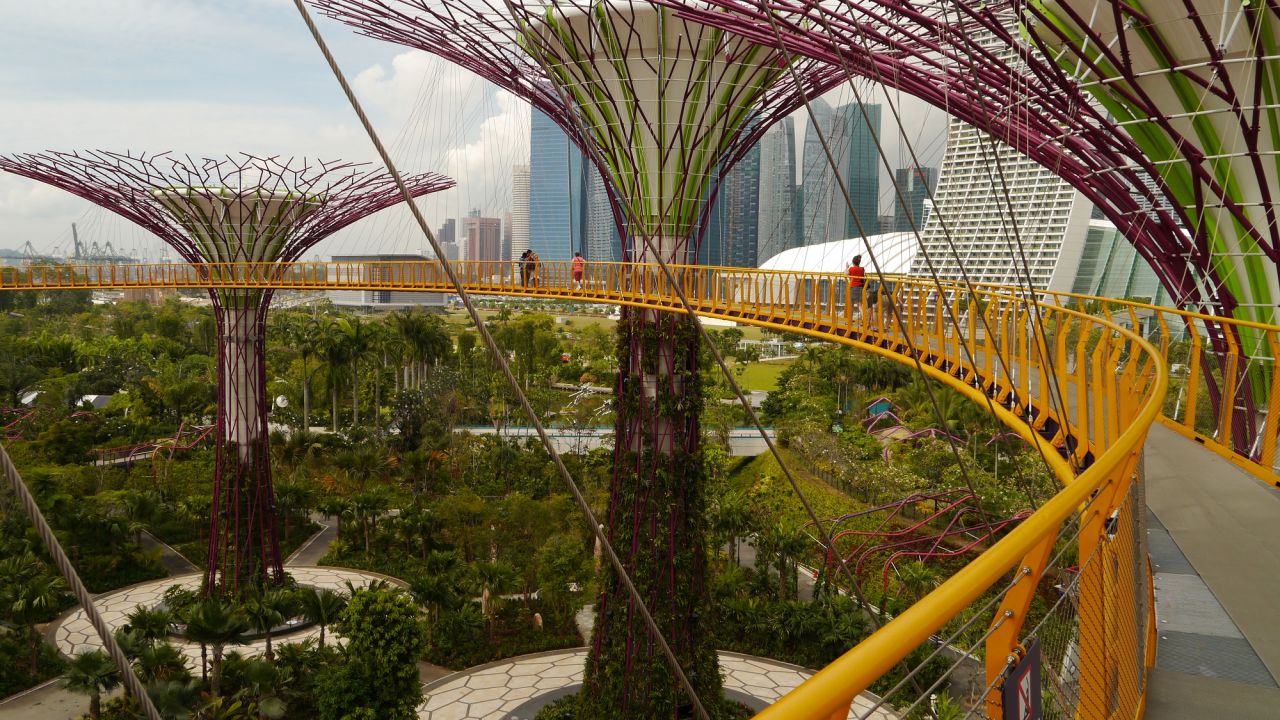 The view from above: OCBC Skyway

A visit of these incredible gardens needs to start from the Supertrees, which dominate the landscape of this vast area. The tree-like structures have a concrete core surrounded by a steel frame ranging between 25 and 50 metres and are in fact vertical gardens, hosting and supporting 162,900 plants in total, such as ferns, vines, orchids and other tropical flora just like oversized trellis. They actually look like massive inverted umbrellas and also have other practical functions: some collect rainwater for irrigation, some work as air intakes and exhausts for the nearby conservatories and some even have photo-voltaic cells. In that respect they are meant to mimic the actions of the plants they support. There is also an elevated 128 metre long slim walkway - the OCBC Skyway, which stretches between two of the tallest Supertrees at 22 metres high above the ground – great as long as you don't suffer from vertigo! If you have worked up an appetite after your walk, there is a bistro restaurant on top of one of the Supertrees, 50 metres up and with stunning views. The park around and underneath the Supertrees is equally stunning but remember that this is Singapore and the heat and humidity are pretty stifling year-round, so I'd recommend to come here early in the day, when it's a bit more bearable. This part of the gardens is accessible for free, so if you have time do come back in the evening to admire these structures lit up in the dreamiest and amazing colours, using the solar energy harvested during the day.  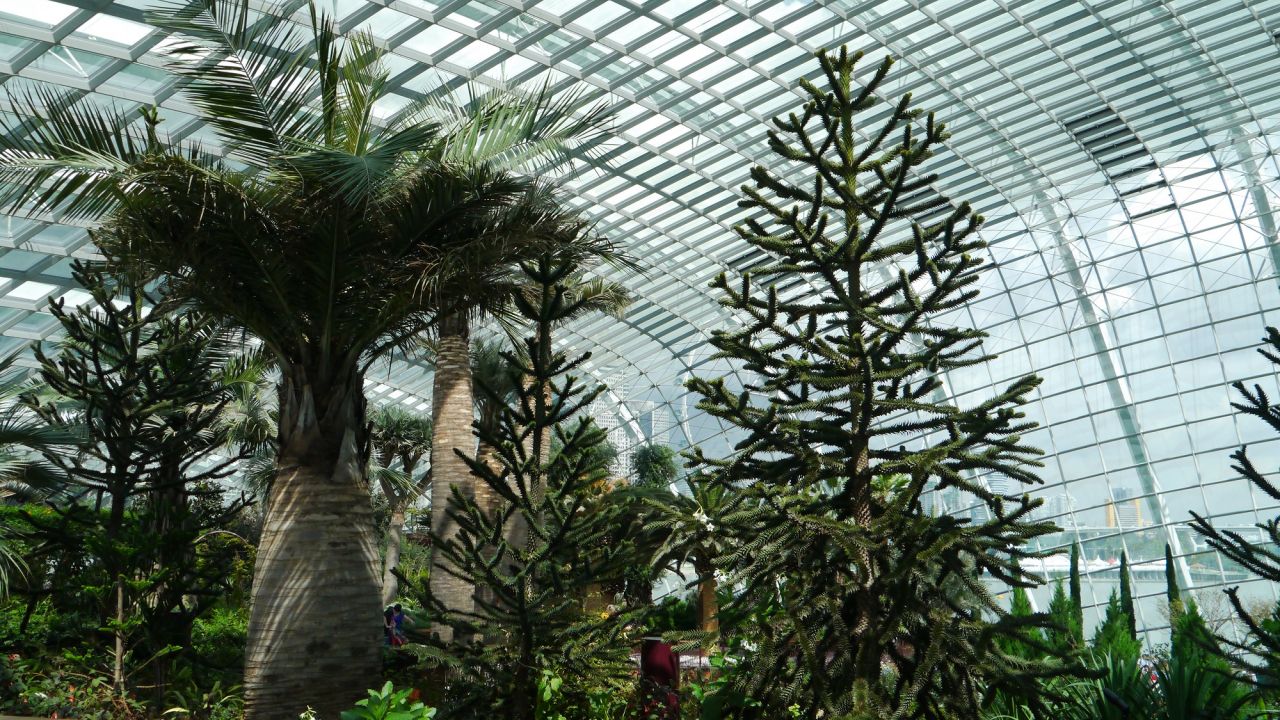 Prehistoric Nature in the Flower Dome

Not far from the Supertrees are two stunning conservatories that will take your breath away. The lower structure, called the Flower Dome is the largest of the two (1.2 hectares) and it is architecturally beautiful. If you wondered how it actually holds up despite its massive size, then you should know that this is actually the world's largest column-less structure. It replicates the mild and dry climates of the world, which means that it's fully air-conditioned and unlike many greenhouses I have visited around the world this one, at a temperature between 23 and 25 degrees Celsius is actually a welcome break from the oppressive humid equatorial Singaporean climate. Inside there are seven different gardens, themed around world environments. You will find a Mediterranean garden, whose centrepoint is a 1,000 old olive tree and a grove of Canary Island Palms, semi-arid gardens from Africa (don't miss the huge Baobabs!) and South America (I loved the Chilean Wine Palms), California and Australia - but there's also a central flower garden that changes from time to time, so you will find different displays according to the seasons. 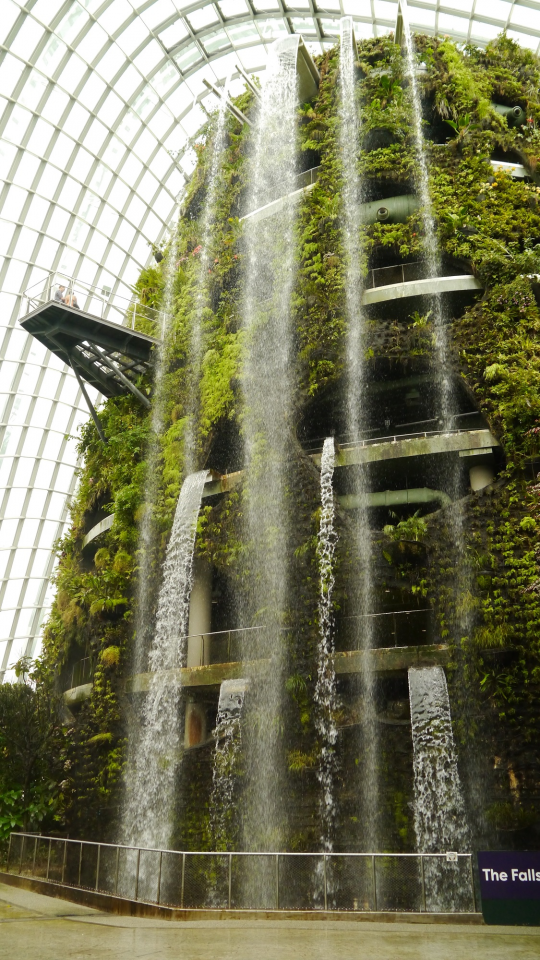 Waterfall in the Cloud Dome

Next door to the Flower Dome is the smaller (but no less amazing) Cloud Dome. The pointed shape of this conservatory hides the mist-veiled Cloud Forest, mimicking the vegetation of tropical highlands of the area, up to 2,000 metres above sea level. There is actually a hollow man-made mountain inside the dome and an enormous waterfall falls from the top – and it is the world's tallest indoor waterfall. At the lower end of this space you will find the shady and mysterious Secret Garden – here you will see plants that have almost disappeared, like the Woolemi Pines. The hollow mountain hides stairs and escalators taking you up to the top a bit at a time through different zones and as you go up you will notice that the temperature drops and the humidity increases, till you get to the top (the Lost World) where you are shrouded in a fine mist, as if you were on top of a lofty Borneo mountain. There are a number of spectacular suspended walkways, starting with the Cloud Walk, which give the impression of flying above the mist over the tropical forest, to the Treetop Walk further below. From the higher parts of the Dome you will not only get a stunning view over an incredible and almost primordial tree canopy, but also some pretty gorgeous views over the city and the Marina Bay Sands building nearby.

As you walk around the dome, you have a welcome chance to learn extensively about the uniqueness of the cloud forests and the huge environmental threats that come from deforestation and climate change. 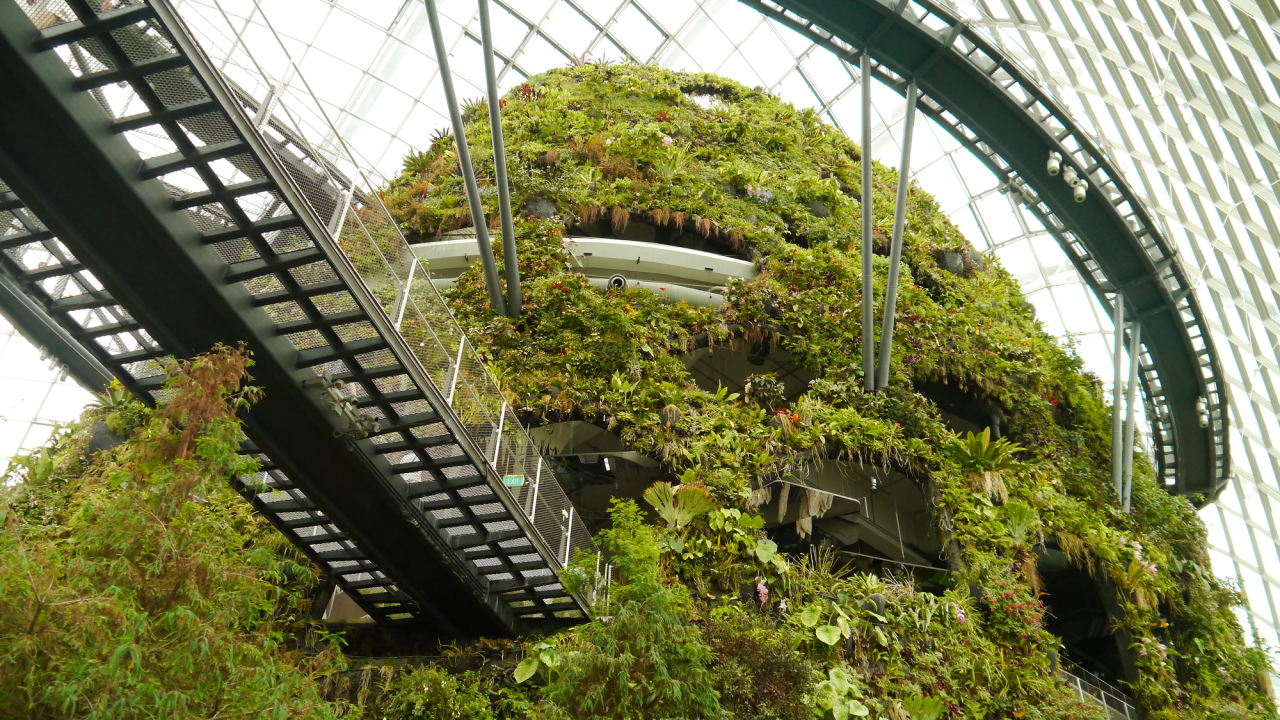 I thoroughly enjoyed my visit to the Supertrees, but in particular the two conservatories: as you walk around these amazing architectural creations you realise how nature's beauty complements man's work. In fact at times, especially in the Cloud Dome I felt a bit like in a real-life version of Pandora – as in the Movie 'Avatar'! But no doubt, this is a brilliant way of spending a day and if you travel with kids this is an unmissable stop on your Singapore itinerary – and certainly more educational and meaningful than Sentosa.