Vienna is a city with an incredibly rich history. Wandering around its street, admiring its lavish palaces and buildings, breathing in its Imperial grandeur is simply extraordinary. And whilst Vienna today is a forward-thinking, open and tolerant city, even in the past it has been home to a few prominent gay historical characters.

Below are the interesting and somehow curious stories of seven of these characters - and the locations behind their stories.

Madame l'Ancienne, a.k.a. Prince Eugene of Savoy - The Belvedere

The Belvedere Palace with its lavish gardens was once set amidst the Viennese countryside and was the lofty summer residence of Prince Eugene of Savoy (1663-1736), one of the most influential (and unlikely) gay figures in Imperial Vienna. The Prince was not the most attractive man and he was rather short in height – but he happened to be a very brilliant military strategist. He came to Austria at the age of 19 when his mother got caught in a scandal in his native France. It was there and because of this scandal that King Louis XIV had refused him to join his troops, so he ganged up with the Duke of Turenne, and shocked the court of Versailles by putting on women's clothes. Not that he was new to these antics – we even know that his 'drag names' were Madame Simone or Madame l'Ancienne.

Eugene arrived at a rather turbulent time for Vienna: the city was being besieged by the Ottomans and his military talents allowed him to gain victory in a decisive battle against the Turks in 1683.

The art-loving Prince served under three emperors — Leopold I, Joseph I and Karl VI — and won triumphantly in battles against the Turks, who at that time ruled all over South-Eastern Europe. One of his major victories was the liberation of Belgrade from Turkish rule. The architecture of Belvedere Palace refers to these victories by imitating the form of Turkish army tents in the green roofs of the building.

Eugene never married and there are no accounts of him having any relationship with ladies, which must have been pretty unusual at a time when the pressure for conformity was overwhelming.

Emperor Karl VI's and his 'Close Friendship' - The Karlplatz

Just downhill from the Belvedere is the imposing Karlsplatz where the biggest Baroque church in Vienna (Karlskirche) is linked to another very important (and likely gay) historical figure: Emperor Karl VI (1685–1740).

He himself was the founder of this church, which is dedicated to his name saint - St. Charles Borromeo, but also the father of the famous Austrian monarch Maria Theresia. The Emperor was rumoured to have a rather intimate relationship with Count Michael Johann III Althan, who had the privilege of being one of the very few persons accepted in the intimate circles of the egocentric and pretty reserved Emperor. Was it close manly friendship or clandestine gay love? We'll never know for sure and clearly very few details are known about the true nature of the relationship, but we know that Karl VI lavished several palaces on Althan in Vienna, apparently so that the two men could remain close at hand. He also once wrote about Althan upon his death as "my truest servant, my heart's friend, who loves me as I have loved him for nineteen years in true, profound friendship.

Composer Franz Schubert died of Syphilis at his home in Kettenbrückengasse 6, on 19th November 1828. Supposedly this was caused by the only sexual experience Schubert ever had with a woman. Talk about bad luck!

That's because from this one very big mishap, "Franzl" concentrated his desires on male partners. In fact for more than two years he shared his studio - and his bed - with the well-known gay librettist Johann Baptist Mayerhofer. Their feelings for each other are reflected in several of Mayerhofer's librettos for Schubert's compositions, and in their joint opera project "Adrast", which was never realised.

A Partnership in Work and Life - The Opera House

The imposing building of the Opera House is the work of architects Eduard van der Nüll and August Sicard von Sicardsburg who were partners in business and in life. Sadly, this project also marked the tragic end of their relationship: when the two started working on the design, the level of the new Ringstrasse had not yet been set. But by the time the construction started, the street level had been raised by one metre, so the optical effect on the Opera House was not particularly good. It looked – and still looks – as it had sunk into the ground, which is also why the ramps on either side do not really qualify as ramps. As public criticism mounted, even the Emperor Franz Jozef expressed his disappointment with the final product. Tragically, Van der Nüll – always on the depressive side – committed suicide on 3rd April, 1868. Only ten weeks later, on June 11, Sicardsburg died too, apparently of a "broken heart."

The younger brother of Emperor Franz Josef, Archduke Ludwig Viktor, was tenderly called "Luziwuzi" by his friends, and who was commonly known at Court for his malicious tongue and his predilection for wearing women's clothes.

His mother tried to get him married several times, without success. Instead he concentrated on building up his own art collection and had a city palace erected on Vienna's Schwarzenbergplatz - Palais Erzherzog Ludwig Viktor, according to plans designed by Heinrich von Ferstel. Here Ludwig Viktor held several rather 'gay' parties.

Perhaps rather unsurprisingly, the Archduke's favourite past time apart from partying and collecting art was to visit the ornate and upmarket "Centralbad" - today the Kaiserbründl gay bathhouse. On one of his visits there the Archiduke caused a big scandal when an officer of the Austrian army slapped him in the face after Luziwuzi had made some obviously unwelcome sexual advances in the steam room. This interesting episode is another reason to visit this amazing (and vast) place, even if you have been to many other saunas, as this one is pretty spectacular with its Arabesque style and refined ambiance.

Anyway, due to this slapping incident his brother and emperor, who had been somehow tolerant of his brother's outrageous behaviour up to that point, forbid Ludwig Viktor to remain in Vienna and 'exiled' him to Schloss Klessheim near Salzburg, well away from saunas and the capital's limelight. Here Archduke Luziwuzi died in 1919, aged 76.

Isabella was born in Madrid in 1741, the daughter of the Infante Felipe of Spain, Duke of Parma and his wife Louise Elisabeth, eldest daughter of Louis XV of France. In 1760 a marriage by proxy was arranged between Isabella and Archduke Josef of Austria, heir to the Habsburg Monarchy.

After Isabella's arrival in Vienna, Joseph was thrilled with his new bride and overwhelmed the queen with his love. In return, she increasingly locked herself away, so much so much that she quickly plunged into melancholy. It appears that the cause for this feeling was the fact that Isabella spent most of the time with Josef's sister Maria Christina. The two women loved each other deeply. During the few years Isabella and Christina knew each other, they exchanged 200 letters and "billets" while living at the same court. They spent so much time together that they earned the comparison with Orpheus and Eurydice.

Isabel and Maria were united not only by a shared interest in music and art but also by a deep mutual lesbian love, unfortunately something that in their circumstances and in those days had to remain secret. Every day they wrote long letters to each other in which they revealed their feelings of love. But while the letters of Maria Christina showed her happy nature, Isabel's feelings were mixed and, in her expressions of affection, showed a certain pessimism, reflecting her growing obsession with death.

Isabella suffered several miscarriages and in 1763, she fell ill with smallpox and gave birth three months premature, to a daughter, Maria Christina, who died a few hours after birth. A week later, Isabella followed her daughter in death at Schönbrunn Palace. 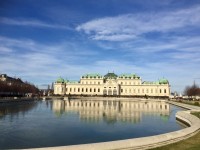 Bratislava: A Different Perspective
There's No Place Like Home...