Giorgio Petti
LGBT+ Geotourism History
5342 Hits
I am sure that at least once we have all found ourselves in the centre of a major city, in the middle of the summer, the tarmac melting under our feet and the searing heat radiating from the buildings wondering why the hell we didn't choose a better time to visit... But thankfully many cities boasts oasis where visitors and locals alike can swim and relax - and socialise! Here's our pick of the best. 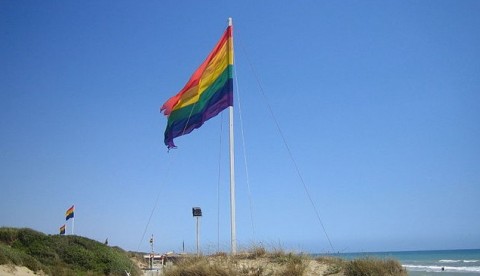 Visiting the Forum and the Colosseum is a must when in Rome, but in the height of the summer you could roast a steak on those ancient rocks, so what to do to get some respite? The good news is that the Eternal City is close to the sea and to a great gay beach – the bad news is that it's not so easy to get there.

But let's start with the good news: Capocotta Beach, affectionately named 'il buco' because in the early 1970s the first users of this long stretch of coast could only get there via a hole (buco) in the perimeter fence, is to the south of the coastal town of Ostia Lido. In 2000 it was officially recognised as the first nudist beach in Italy and is a wide stretch of sand bordered by dune formations, covered by some shrubs. In parts the vegetation is thick enough to provide shelter (and opportunities for cruising, of course). Being quite a distance from urban areas, the sea is quite clean and in fact there is a marine reserve just about 5 kilometres offshore. There are some seasonal kiosks providing refreshments and also facilities like sunbeds, but we recommend to bring some food and drinks as at the time of writing some of these kiosks are under threat of demolition by the authorities.

The gay beach is accessed via the 8th Cancello (Gate), which is also the furthest one. Recently the beach has become so popular that there are now unofficial areas for different 'gay tribes' – so you will encounter the bears in one section, the muscle boys in another, and so on and so forth. You can of course sit wherever you like! Just choose your fancy… Now the bad news – Capocotta beach is not so easy to get to. You will need to take the train to Ostia from the Ostiense Station (linked with the B line of the metro), alight at Cristoforo Colombo (the last station) and then take the bus (line 07) to the 8th Cancello. If you have a car of course it is a lot easier: you can park along the main road. 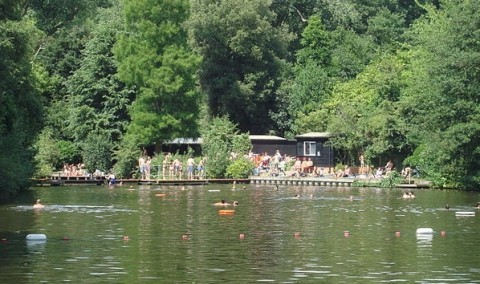 London does not often get scalding hot, but when it does it's pretty much unbearable. The Thames' greeny-grey hue does not look like an inviting swim and Brighton is a pretty long hike – so where to go for a refreshing swim?

Hampstead Heath is famous as a cruising ground, but the Men's Pond is nowhere near the cruising area – it's actually right on the other side of the vast parkland. There are actually several ponds, of which three are for swimming but the men's pond is the second from the South.

The water in the ponds is crystal clear as it is fed from natural springs underneath the park (in fact the ones from which the historical and now hidden River Fleet originates), but for this very reason it is also pretty chilly, even on the most searing hot day. You are able to swim here every day, even in winter, though we wouldn't recommend it unless you're a penguin. There is a charge to enter the pond area, between £2.10 and £3.50 depending on the time/season. Or you can get a day-ticket for less than £7.

Around the swim area are some pleasant lawns (these are outside the swim area so they are free to access) and on a warm day it feels like the whole of gay London comes here to picnic. To get to Hampstead Men's Pond the nearest station is Gospel Oak on the Overground – from there is about 400 mts walk. Or alternatively the nearest underground station is Tufnell Park, on the Northern Line and then it's about 600-700 mts walk from there. 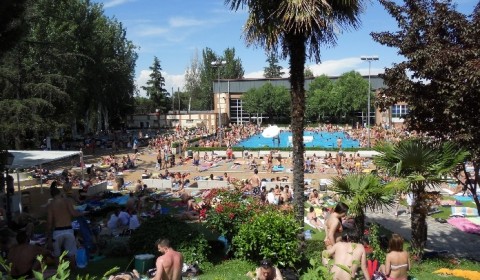 The Spanish capital often stays in the high 30s or low 40s (that's over 100F for our US readers) for most of the summer months. Positively roasting – not even a gallon of iced sangria would be enough to refresh (and we wouldn't recommend that anyway!).

But in these positively scalding temps it's good to know that even in Madrid there are opportunities for socialising and having fun by the water. And only a few minutes from the city centre. The Piscina de Lago (or more correctly Centro Deportivo Municipal Casa de Campo) comprises several pools, including one that is 50 square metres. The pools are surrounded by nice lawns to sunbathe and of course socialise with the neighbours. There is obviously a mixed crowd but there is a 'gay enclave' at the top of the complex – it won't take long to find it: just follow the hot boys…

In the summer the pools are really busy, especially at weekends so if you want to avoid the queue and more importantly find a spot to lay your towel try to arrive early, i.e. before lunchtime. The pool becomes astonishingly (and probably very predictably) busy on the week of Madrid Pride in early July – but it's a great place to hang out pre-parade/pre-party.

The pool is open from late May till September and the entry charge is very reasonable (about €6). You can buy drinks (including alcohol), snacks and food inside the complex. There are of course changing facilities, showers, etc. To get to the Piscina de Lago is really easy – just get the metro line 10 towards Puerta del Sur and alight at Lago (it's only two stops from Plaza de Espaňa). 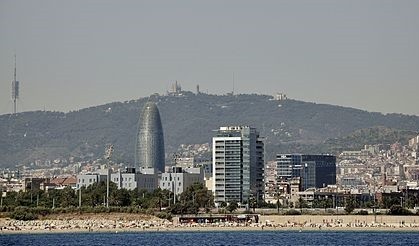 Being a coastal city with miles and miles of sandy shores, Barcelona offers a perfect blend of culture, entertainment and beach fun. The beach of Mar Bella was actually created during the redevelopment of the sea front in the early 1990s and since then it has become a favourite with the gay community, also because the beach has also a clothing-optional policy. Some people bare it all, some others don't – take your pick.

The beach is not as wide as Barceloneta further south and it gets very busy at weekends, but it's a must over the summer months and the local chiringuito BeGay is a great spot to watch the world (and especially the hot men) go by, have a tasty snack as well as a drink or two. The chiringuito is open until late and there are often evening parties in the summer season – check theire website for details.

There are also some activities i.e. kayaking, wind-surfing and skate boarding around. Despite not being in the very centre of Barcelona, the Mar Bella Beach is easily reachable by metro – linea 4 – and from the station of Poble Nou it's just about ten mins walk. 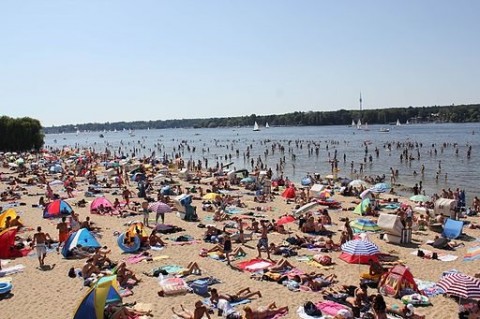 Berlin summers can be hot as well. But fear not: the city is literally awash with opportunities for a refreshing swim and we are sure we won't surprise anyone in saying that the locals aren't shy and have no issues in skinny dipping.

It's a bit of a trek to reach the Strandbad Wannsee but it's possibly the closest you'd get to an ocean beach in landlocked Berlin – they even went to the length of shipping sand from the Baltic Sea to add to the marine feel. The area has been popular for over 100 years and the facilities have been recently renovated. The Wannsee itself is beautiful and back at the time of the Wall it was the only main lake within the West so it has some historical significance. The complex is actually huge – the sand stretches for over a kilometre and on busy days the Lido can accommodate up to 30,000 bathers, so it can get quite cosy on the sand! There is a nudist area and within it the gay section: as you enter the Lido turn right, walk past the FKK (nudist) section and then is the gay 'enclave'. Entry to the Strandbad is €8.

In terms of food & drinks, there are opportunities to buy some there, but it seems that most Berliners bring their own stuff and have a picnic. To reach the Strandbad you can take the S-Bahn lines S1 or S7 to Nikolassee (not Wannsee) and then it's about 10-15 mins walk from there.