​I am going to state the obvious: gays love interior design. There has always been a close connection between queer guys and the desire to beautify and refine homes. Maybe because we, gays love surrounding ourselves with nice things and enjoying life to the max. Maybe because we have an innate sense of beauty. Or, most likely, all of the above. Who knows?

But whether one is gay or not, it is undeniable that the way a house is furnished is directly connected to the culture, the ideas and the aspirations of the person who lives there. As we receive guests and relatives in our homes, we turn them from functional shelters into showcases of ourselves, a way of displaying our wealth, status, lifestyle, beliefs.

One excellent opportunity to browse through four hundred years of interior design is to spend a few hours at the amazing Geffrye Museum in London's Hackney. This is one of those little gems that most tourists are unaware of – and to be fair most Londoners also sadly ignore the existence of this compact 'time capsule'.

The museum is housed in a number of beautiful almshouses, which are dwellings for the use of the poor or (like in this case) pensioners. They were built in 1714 around a pretty garden and on land donated by wealthy merchant and Lord Mayor of London, Sir Robert Geffrye, hence the museum's name. Geffrye died at the very respectable age of 91 without heirs and at the time this area was almost semi-rural, but with the expansion of London, it became very industrial and insalubrious, blighted by crime and poverty.

The pensioners decided to move out to other areas and the almshouses were bought by the City Council and converted in a museum of the local furniture & woodwork in 1914. Thankfully the beautiful gardens were also preserved from redevelopment. In the 1930s with the local furniture industry relocating away from the area, the museum was re-organised in a series of period rooms, which is what we can see today. A modern wing has been added to these rooms in 1998, thus further expanding the Geffrye's collection. At the time of the Great Fire of London... 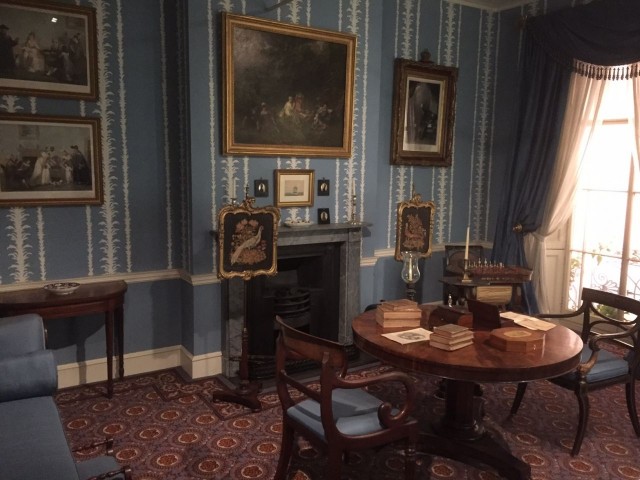 The fascinating concept of this museum is to tell the story of the English middle classes from the start of the industrial revolution to the present time via a series of painstakingly reconstructed front rooms, from the 17th century to today, often with original furniture and objects. Why just the front rooms? Well, first of all because this was where people spent most of the time, especially at a time when there was no electricity and central heating.

But not just this: as mentioned above, homes have always been a mirror of the residents' status and beliefs and the front room in particular is where these concepts are specifically projected to the outside world. In other words, this is what we want other people to see and think about us – whether this is an accurate description or not. It is quite interesting to understand the evolution of the middle classes' tastes over the course of the last four centuries, because it constantly mirrors the history of Britain in the same period. The industrial revolution for the first time allowed individuals to become entrepreneurs, makers of their destiny and thus wealthy regardless of their class – this is the point when British society starts changing from being based on blood lineage to be centred on individual talent. And this is when the middle classes start their unstoppable rise, from a small minority in the 17th century to their dominance today – when most people identify themselves that way. The middle classes initially aspired to emulate the upper lot, but fairly soon they developed their own set of values and quickly made these ideals mainstream – think of the morality and ethics of the Victorian times.

And not just interior design: gays also love gardens and the museum has also an intriguing number of outside spaces to also tell a story of how domestic gardens have evolved in the last 400 years. Absolutely stunning, especially if visiting during the spring and summer months.

The Geffrye is definitely a must-stop for anyone into interior design, but also for anyone who wants to understand the history and culture of the United Kingdom from a different and interesting perspective. The museum is well aware of its appeal to LGBT people and organise many events directed to our community. At the time of writing it is organising a 'There's No Place Like Home' evening in late October 2016 with the participation of many LGBT artists. Check the museum's website for a calendar of events

The Geffrye Musuem of The Home is located in 136 Kingsland Rd, London, Hackney E2 8EA

Opening Hours: Daily except Mondays from 10am to 5pm (Bank Holiday Mondays open).

Facilities: Cafe, Shop. Entrance and gardens are ramped and accessible for wheelchairs