Summer of 2020 will be remembered for the travel plans that didn't happen and the limitations imposed on free movements, which made many destinations simply out of reach.

However it will also be remembered as the summer in which many of us, me included, had a chance to travel more locally, perhaps to places we wouldn't have otherwise travelled to. Many of us, at the end of a long lockdown in our city flats, felt the need to reconnect with nature, to surround themselves with tranquility and peace. So at the beginning of July, my husband and I decided to take a holiday in the Aran Valley (Val d'Aran). The Val d'Arán, is the north-easternmost corner of Catalunya, right at the border with France. Geographically, this area is closer to France than to Spain, starting with the crystalline river that flows through the valley - none other than the mighty Garonne, which here is just a tumultuous mountain stream then flowing across the border through the Aquitaine region and its famous vineyards and ending in fascinating Bordeaux. The separate identity of the valley and its closeness to France is also reflected in the local culture: although everyone speaks Spanish and Catalan, the locals use the ancient Aranés language, which is a variation of the Gascon-Occitan language. 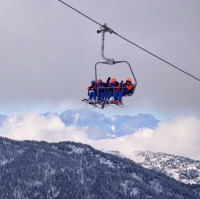 When to go there?

Established in the late 1960s the four combined ski areas of Baqueira-Beret now cover a length of 167 Km of slopes, the largest - and also the poshest ski resort in Spain.

We travelled in summer and discovered an endless list of excursions (for all levels of fitness), high altitude hikes for the most ambitious and lots of local arts.

How to get here?

Up to the late 1940s the only way to reach the valley from the southern side was to take the highly spectacular - but incredibly winding road that crosses the Bonaigua Pass, at 2070 metres on sea level. Due to its altitude, this route was impassable during most of the winter and so the valley was often only reachable from the French side. It was only in 1948 that a long (over 5 Km) tunnel finally opened after more than 20 years of construction, linking Vielha, the valley's main town in a straight line towards the south and Lleida, ending the winter isolation of the Val d'Aran. Both roads are quite spectacular for their views.

There is no rail connection, however a regular bus service connects Barcelona to Vielha in about four hours.

A car is obviously very convenient to reach the most remote corners of the valley. However there is a bus service connecting the various villages, from which you can enjoy many mountain excursion paths.

There is quite a large choice of hotels and apartments and as they are focused onto skiers in winter, during the non-ski season they come about at a very reasonable rate. You can choose a design city apartment in Vielha if you prefer to have more life on your doorstep. Or, like us, you can choose to stay in one of the smaller and very picturesque stone houses in a typical village, which are a lot quieter and offer some small convenience shops for your last-minute grocery needs as well as a handful of cafes and restaurants. Our choice was a charming and welcoming modern two bedroom apartment set in a converted typical period stone house in Salardú, a small village about 10 Km from Vielha. If you prefer more isolation, there are also some beautiful alpine-style dream stone and wood cottages of all sizes in more rural surroundings: there you can enjoy true peace and tranquility.

Bear in mind that if you rent an apartment, the majority of the shops are in Vielha, where you will probably do most of your shopping. There are lots of apartments in the main ski resort of Baqueira, for instance - but no grocery shops were opened when we visited in the summer.

We really loved visiting the small villages dotted in the valley (there are 33 of them!), with their typical houses made of local stone, slate and wood. Each village has its own church, often surrounded by lovely gardens and have picturesque bell towers. Many of these churches are very ancient as they date back to the Romanic Period - 11th to 13th century. The most beautiful are in Bossóst, Artiés and Tredós, and some are set in spectacular settings. Inside you'll often find some beautiful ancient frescos and elaborate stone carvings by local artists. There are literally hundreds of them, some easier and some more difficult. As we're not expert hikers, we stuck to the more accessible ones. These were our favourites:

The minute village of Montgarri, set in a picture-postcard valley and crossed by a rumbling stream. There is a sanctuary dating back to 1117 and a couple of buildings still in use (including a restaurant/hotel) however most of the houses are in ruin as the village was all but abandoned in the 1960s due to the really hard conditions of living here during the winter (often reaching -15C degrees). To get here today is relatively easy as you can drive along the GR211 road all the way to the ski fields of Beret (where you will pass the source of the Garonne) and then walk from the ski station's car park through an easy path. The bell tower of the sanctuary comes in view suddenly in the green pristine river-crossed valley and it's a spectacle that seems proper of a fairy tale. From the car park of Orri, which you will also find along the GR211 road, a path leads you to the cluster of alpine lakes of Baciver, at an altitude of over 2300 metres. You will first walk through some stunning pine forests crossed by rumbling streams and waterfalls, before getting to the high-altitude rocky plateau where the crystal-like lakes are found. It's a steep climb in parts but the views towards the valley and the snow-capped Aneto Peaks (the highest in the Pyrenees at 3400 metres) more than compensate the effort. When we visited in July there were still patches of snow here and there and the atmosphere incredibly still and peaceful. The Aïguestortes National Park's most spectacular spot and the largest concentration of lakes in the Pyrenees is a relatively easy excursion from the end of the road that connects Tredos to its Banhs (see wellness section). The path crosses spectacular and untouched pine forests and flowered green mountain meadows. Along the route you will encounter rumbling waterfalls and crystalline streams, before you reach the beautiful alpine lakes. Snow-capped peaks in the distance complete the picture. Absolutely picture postcard. Refreshing: me at the Sauth deth Pish

Situated in the Varrados Valley, up from the village of Arrós, a handful of kilometres from the French border, this is probably the prettiest waterfall in the Val d'Aran and surely the largest. It's also an easy excursion as you can park the car almost at the waterfall itself and then walk around the valley to capture the sparkling fall from different points of view. This area also reminds us that before tourism and skiing the Val d'Aran main activity was iron, lead and zinc mining. In fact the road to this remote location was built to serve some of the mines that were around here. From the Saut death Pish a track leads to the Liat Lake Mine, at an altitude of 2400 metres, which was abandoned in the 1960s and was served by a cable car 13 Km long, used to transport the minerals down the valley, at Pontaut.

The Toran Valley, which starts at Canejan, the last town before the French border is one of the most remote and for this reason the villages along this route like Porcingles and Sant Joan are some of the most picturesque in the area. The views towards the Garonne Valley and the Aneto peaks from the various miradores along the route is quite exceptional. The road ends not far from the beautiful Honeria Mountain Refuge. Once this area was mainly inhabited by miners who worked up in the mountains. The route along the Toran valley was also very popular with smugglers, who could get in and out of France bypassing the main control post, just past Pontaut.

Note: Always check the weather forecast before setting off for an excursion and take extra care as we ourselves during our stay witnessed some very sudden changes. Summer storms in the Pyrenees can be sudden and violent. Clouds may roll in at short notice making the visibility poor. When the Romans arrived here, over 2,000 years ago, they found a number of thermal springs, which they took advantage of. The Termas Baronia, located in Les - about 15 minutes drive from Vielha, take advantage of a sulphuric spring rising at over 30 C and were visited by Roman general and politician Pompey. Today you can have all sort of beauty and spa treatments here. Another opportunity to enjoy the natural wealth of this area is at the Banhs d'Arties. Here you will find two modern open-air pools, opened between June and October, collecting the sulphurous water that rises here at 39 C. Entry is very cheap at €3.

For an incredible high-altitude experience you can stay in one of the 9 rooms of the Banhs de Tredós Hotel, which is located at almost 1,800 metres high, at the beginning of the Circ de Colomer hiking path and the highest thermal resort in Europe. In summer it's easily reachable by car, however in winter guests can only travel there by snowmobile, which adds to the charm and total isolation of this site.