Via Francigena & Viterbo - The approach to Rome 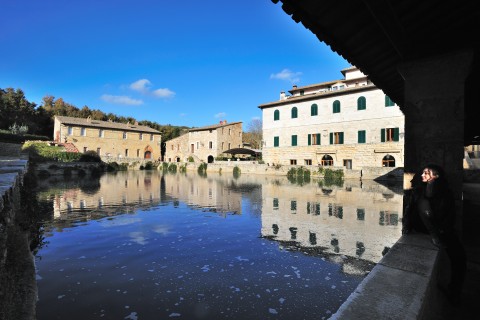 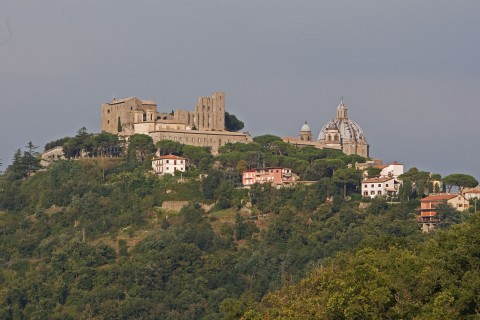 During the middle ages a lot of the Roman roads leading to and from Rome had fallen in disrepair. The journey to the Holy See was long, arduous and often dangerous, for the medieval roads were neglected and frequented by bandits. Yet thousands of people made the journey to Rome every year as their was one of the three major holy pilgrimages (the other two were to Santiago de Compostela and the Holy Land). The trip to Rome from northern Europe followed the Via Francigena, which on its last approach towards the eternal city roughly followed the route of the Roman Via Cassia.

The area around the city of Viterbo, about 90 kilometres north of Rome, is an area rich in history, inhabited first by the Etruscans over 2,500 years ago who left plenty of traces of their remarkable civilisation. During the middle ages this region saw a thriving network of wealthy towns and cities and many of them have witnessed historical events of great significance. It is indeed quite strange that very few tourists visit this region, driving instead to the more well known destinations in Tuscany, further north. Apart from the precious historical heritage, this region also boasts a beautiful natural landscape, with lakes, splendid oak forests and an ancient volcanic past, of which we are reminded of by the many hot springs and mineral waters that can be enjoyed here.

One of the most important stops after Siena and before reaching Viterbo was the small village of Bagno Vignoni built on a hill and around some hot springs that feed a large pool where pilgrims could rest and bathe. The village square and pool as we see them today were built in the 16th century but their origins are much older - the Romans and before them the Etruscans very much loved the healing properties of these waters. The spa of Bagno Vignoni was attended by eminent personalities such as Pope Pius II, Saint Catherine of Siena, Lorenzo the Magnificent. Many other Renaissance artists decided to set their residence here. Today it is not possible to bathe in the springs, but there are other hot springs nearby.

One of such other springs is located just to the west of Viterbo. The locals call it Bullicame and this name has been around for some time as it was mentioned by SIgeric, Archbishop of Canterbury in the year 990 as one of the stops along the Via Francigena, also called Sce Valentine because the famous early Christian martyr was said to have been killed in this area. Three hundred years later Dante Alighieri also mentions this place in his Divine Comedy. In fact even the Etruscans were aware of these bubbling pools, well before the Romans. The sulfuric water springs at a temperature of 58 degrees Celsius and in the past, apart from bathing, the waters were also used to bleach flax and hemp fibres, and the nearby city of Viterbo became famous for the quality of its textiles as a result. The landscape surrounding the main spring is almost lunar-like, white and bleached by the sulfuric vapours.

Bolsena and the Corpus Domini

The town of Bolsena is positioned on the shore of the beautiful volcanic lake of the same name and is famous for a supposed miracle that happened here in 1263 when blood came out of consecrated holy bread. As a result, Pope Urban IV instituted the religious holiday of Corpus Domini, which is still celebrated today in many countries. Also of interest here is the Rocca (Castle) Monaldeschi; built in the twelfth century it now houses a small local museum which illustrates the rich history of this area, settled thousands of years ago. The view from the top of the castle is quite stunning. In the summer the lake is a lovely spot for a swim, as its waters are very clean and calm. There are plenty of sandy beaches to choose from: I recommend the southern shore, which also get the best afternoon sunshine.

Another stop along the Via Francigena, about 90 Km north of Rome is the city of Montefiascone, perched atop the edge of the hills surrounding the Lake of Bolsena. The name Est! Est!! Est!!! refers to the white wine produced here. It is said that in the 12th century a German Bishop travelling to Rome to meet the Pope sent a prelate ahead of him with the mission of surveying the villages along the route for the best wines, so that the Bishop knew where to stop on his journeys to the Holy See. His task was to write 'Est' (Latin for 'It is!') on the wall or the door of the inns he visited, but when he got to Montefiascone he was so overwhelmed with the local white wine that he wrote Est! Est!! Est!!! on the door of the inn. There is obviously no sign of the said pub any longer but the wine is still pretty good as the vineyards here sit on the slopes of the ancient Vulsine Volcano.

The city of Viterbo often gets skipped by tourists but it has an ancient history, dating back to Etruscan and then Roman times. Of that period not much is left, though we know that some buildings, such as Santa Maria Nuova, were actually built on top of Roman temples (in this case a temple to Jupiter). What we see today is a beautifully preserved Medieval city, though some parts of it were damaged in 1944 by air raids. Viterbo is also called La Cittå dei Papi - The Papal City, because in 1257 the then Pope Alexander IV decided to transfer his court in the city due to the hostile environment in Rome and the civil wars between Guelphs and Ghibellines. Popes resided and were elected until 1257 in the beautiful Gothic Palazzo Papale which is positioned in a panoramic and quiet square, flanked on the opposite side by the Duomo, with its tall bell tower. Another very suggestive location is the church of Saint Silvester, whose facade is thought to be over 1000 years old. Here in 1271 Guido de Montfort killed Prince Herny of Cornwall to avenge the murder of his father by Henry III of England during the Battle of Evesham.

Visitors of this medieval city will notice a number of beautiful fountains that seem to adorn every square. The San Pellegrino quarter is an almost immaculately preserved medieval area, so much so that it has been used as the backdrop for countless movies and dramas.

Another curiosity is that Viterbo has a huge underground network of tunnels, dug into the rock. Today they're mostly used as cellars but during the middle ages they connected the various buildings in the city centre. You can visit some of them today - tours are organised at the office situated in Piazza della Morte.

If visiting on 3 September, you will find the city in full festive mode as the procession of Santa Rosa is held. During the evening hours a gigantic lit up structure - 30 metres high and weighing 6 tonnes, is carried around the city by 100 men at night in a very picturesque spectacle.

Bagnaia and the Villa Lante

Close to Viterbo is the Villa Lante, a Mannerist 'garden of surprises' built by Jacopo Barozzi da Vignola and initially commissioned by Cardinal Gambara in the sixteenth century. There are two palazzi on site, but the main interest of this location are the beautiful gardens, which feature grottoes, cascades, ornate streams and monumental statues. There are various areas in the park, some with monumental trees and because the gardens are on a slope, some great views are to be enjoyed. Also notable are the beautiful Italianate gardens in front of one of the palazzo.

Bomarzo and the Monsters' Park

Not far from Viterbo is another Mannerist garden, the so called Sacro Bosco (Holy Forest) or more commonly known as Parco dei Mostri (Monsters' Park). The garden was commissioned by Pier Francesco Orsini in the mid-sixteenth century, a rich patron of the arts. He had several imaginary and fantastic figures sculpted around a forest, some even in the existing bedrock. Here we found winged creatures, dragons, monstrous figures and other oddities. like gigantic elephants, leaning houses and so on. Salvador Dali was one of the many people who travelled to this site and was greatly inspired by it.

Spectacularly set atop a high rocky outcrop, this location has been inhabited for over 2,500 years and it's quite clear why. The steep cliffs are almost unassailable and provided a view spanning for kilometres all around. Unfortunately the progressive erosion of the rocks has caused large sections of the town to fall in the ravine below, hence the reason for being a 'dying city'. Actually not-so-dying of late; in recent years a lot of people have re-settled in Civita because of its remoteness and quietness. There are no cars here, the narrow medieval cobbled streets are pedestrian-only and there is hardly any sign of modernity - to this extent the town is almost a time warp into a bygone era. Today a skinny pedestrian bridge connects old Civita to the modern town, but before the bridge was built (in the 1960s) the only way to get up to the village was via a steep and precipitous path.

Sutri and its unique amphitheatre

About 30 kilometres south of Viterbo, along the via Cassia is another stop along the medieval Via Francigena, the town of Sutri. Another Etruscan town, Sutri is at least 2,500 years old and several tombs can be found in the area. The church of the Madonna del Parto is dug in the rock face and it was originally an Etruscan tomb. Also entirely dug in the rock and unique in its nature is the Roman Amphitheatre. The town was also the place when in 728 the 'Donation of Sutri' was signed; in this document the Longobard king Liutprand offered Sutri and other towns in this region to Pope Gregory II. This enabled the Duchy of Rome to expand beyond its original territory and eventually become the Papal State, which survived till 1871. 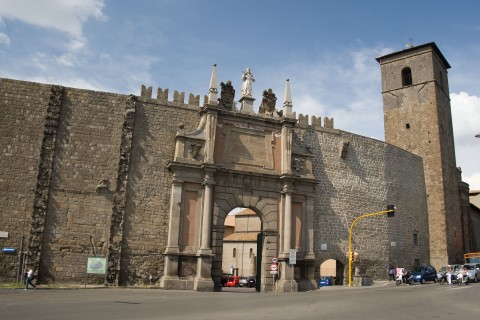