​Oscar Wilde's wit and talent are now fully recognised and celebrated the world over. Yet his judicial and personal ordeal reminds us of how homosexuality was not just frowned upon, but could cause immense damage and, in Wilde's case - imprisonment. In a way, it also remind us how much progress has been made in just over a century.

Although Irish by birth, Wilde spend most of his life in London where he wrote most of his masterpieces. The walk we recommend is pretty easy and can be done in a couple of hours - we listed some of Wilde's favourite haunts and hangouts in the Chelsea, Mayfair and Soho. The city has changed a lot since the author's times, but many of the places we list are still there and give us a fantastic glimpse in a fascinating era. 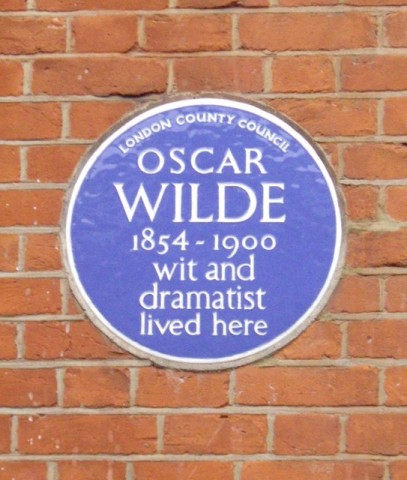 Wilde lived in the red brick Victorian building at no 34 from the time of his marriage to Constance Lloyd in 1884 and until his tragic downfall in 1895, when he was arrested, trialled and then imprisoned in Reading for homosexual practices. And apart from The Ballad of Reading Gaol, he wrote all of this principal works in this flat: The Picture of Dorian Grey (1891), Lady Windermere's Fan (1892), A Woman of No Importance (1893), An Ideal Husband (1895), and The Importance of Being Earnest (1895). 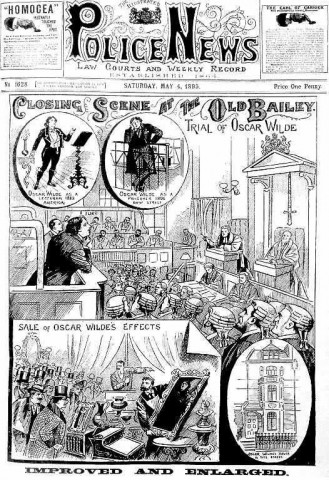 This luxury hotel is currently closed for renovations with a re-opening date set for 2017, but it had only operated for just eight years when on 6 April 1895 Wilde was apprehended by the Police and arrested in room 118 for 'gross indecency with another male person' under section 11 of Criminal Law Amendment Act 1885. The Cadogan even allowed guests to stay in said room for a supplement - no doubt this option will be retained when the hotel re-opens next year. The events in the room were immortalised by the poet laureate John Betjeman in his tragic poem The Arrest of Oscar Wilde at the Cadogan Hotel (1937) (www.poetrybyheart.org.uk/poems/the-arrest-of-oscar-wilde-at-the-cadogan-hotel). 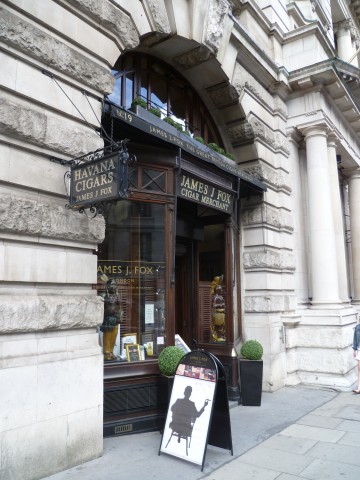 Trading in tobacco and especially fine cigars for 225 years, this shop had many famous customers in its history - apart from Oscar Wilde himself, who allegedly smoked one hundred of his personalised cigarettes a day. Wilde once said: "A cigarette is the perfect type of a perfect pleasure". His were made from Turkish tobacco and had a pure gold leaf tip with his name embossed on them. Sir Winston Churchill was also a regular at this shop, where he purchased his trademark cigars. In the basement is a small museum (free of charge), it's just a room in fact, but full of memorabilia of notable past customers, including the ledgers containing orders for Sir Winston and Oscar Wilde. A final curiosity: this is one of a handful of shops that are exempt from the smoking ban in public places. 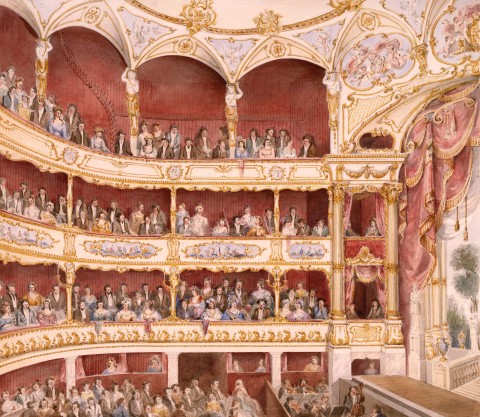 There used to be a theatre here and believe it or not, the building at no 23 is the third to have been erected here since the demolition of the St James' Theatre in 1957. It was in this fine and classical looking theatre that Lady Windermere's Fan and The Importance of Being Earnest were premiered in 1892 and 1895, respectively. Unsurprisingly the theatre's scheduling for demolition caused great outrage and Vivien Leigh and Lawrence Olivier fought hard to avoid it but unsuccessfully in an age when old and heritage were not necessarily considered relevant. The building that replaced the theatre (offices for Tate & Lyle) was itself demolished in 1980 and then its successor followed the same fate in 2012, when the current one was erected. 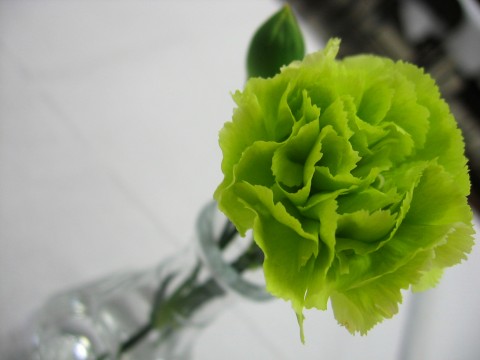 Goodyear The Florist, established in 1879, was based at the beginning of the Royal Arcade, in Albemarle Street where now a Paul Smith shop stands. The florist moved its trade after WWII but it is here that Oscar Wilde bough his famous trademarks, the green carnations, which were reputed to be a signal for other gay men at a time when homosexuality was taboo. 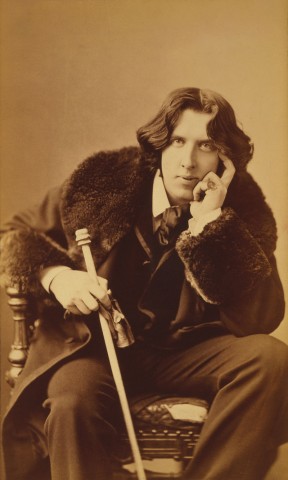 Literally next to Goodyear is the former location of the Albemarle Club, of which Oscar Wilde was a member. The club was a very progressive institution in its heyday because it was one of the first to allow women to be members. The club's claim to fame is that it was here on 28 February 1895 that the Marquess of Queensberry (Lord Alfred Douglas' father) burst into the club, demanding to see Wilde. He was stopped by the porter so instead Queensberry left a calling card with the note "For Oscar Wilde, posing somdomite" (sic). He then set up the legal action against Wilde soon after... 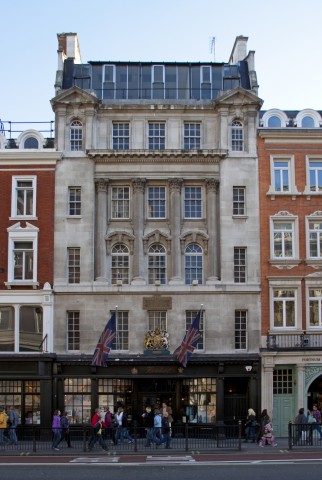 Apart from being Oscar Wilde's favourite bookshop, Hatchards of Piccadilly are also the oldest book retailers in London, having been established in 1797 and having been in this very stop for over two hundred years. Wilde is known to have spent hours browsing books here and spent a little fortune on them.

The writer was finally release from prison on 18 May 1897 and on the same day decided to leave the country and go to France. On his way to Victoria Station he stopped here at Hatchards for a last browse. He sadly never returned to England after that trip and died in impoverished exile on 30 November 1900. 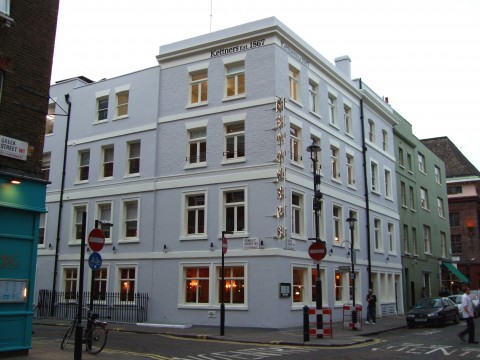 Kettners opened in 1867 by Auguste Kettner, chef to Napoleon III and was Wilde's favourite restaurant, so much that he actually mentioned during the trial. In fact this restaurant has been a favourite of many celebrities, such as Agatha Christie and Bing Crosby to name a few. Sadly this landmark of Soho closed its doors in January 2016 to be redeveloped by its new owners. Although the name will be maintained, at the time of writing it is not known what the form of the new restaurant will be when it finally reopens in 2018. 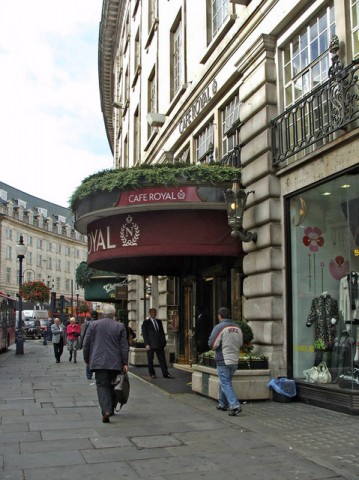 The former Grill Room at Café Royal (now called Oscar Wilde Bar) has been restored to its original 1865 glory in the last few years. Apart from Wilde, who was a regular here, the list of celebrities and royalty who have passed through the doors of this establishment is endless, from Sir Churchill to Virginia Woolf, to David Bowie (who 'farewelled' Ziggy Stardust here) to Diana Princess of Wales.

It is in this café that on 24 March 1895 Wilde received the advice of editor and friend Frank Harris to drop the libel action against the Marquess of Queensberry (following the 'calling card' incident at the Albemarle and to escape to France at once to avoid imprisonment. Wilde decided to press on with the charges, prompted by his lover, young Lord Alfred Douglas - with the very disastrous consequences we all know. Wilde would be arrested a couple of weeks later. 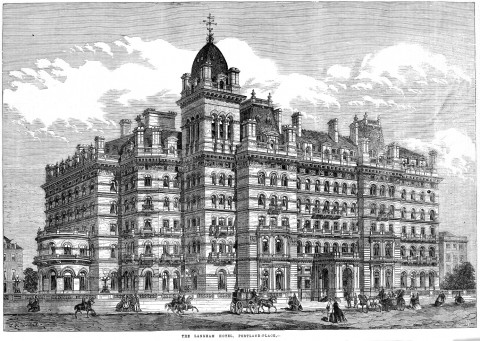 There is an interesting connection between Wilde and another giant of Victorian literature here. Oscar Wilde dined here with Arthur Conan Doyle and the publisher of the Lippinscott Magazine on 30 August 1889. This meeting inspired Wilde to write The Picture of Dorian Gray and Conan Doyle to write The Sign of Four, Sherlock Holmes' second book. A plaque in Langham Place commemorates the event.